CAMERA last week prompted correction of a Haaretz article “(EU joins calls for Israel to stop deportation of NGO director,” page 4, May 1), and online here, which erroneously had stated that the Jerusalem District Court did not find any evidence that Omar Shakir, the Israel and Palestine director of Human Rights Watch, engaged in anti-Israel BDS (boycott, divest sanctions) activity.

The article erred: “The court found that none of the evidence gathered suggested Shakir was active in the BDS movement.”
In fact, the court stated exactly the opposite, confirming that Shakir’s activity was ongoing after he arrived in Israel. In her April 16, 2019 ruling, Justice Tamar Bezeq Rappaport of the Jerusalem District Court stated:

The Petitioner’s Boycott Activity During His Time in Israel
An examination of the petitioner’s actions and statements lead to the conclusion that not only did he not prove that he abandoned his anti-Israel boycott activity, as it was stated in the [Laura] Alqassem matter, but the same clear anti-Israel boycott agenda, is also reflected in the petitioner’s actions and his statements since he entered Israel legally, thus the concern that he would exploit his stay in Israel to support the boycott activity came to fruition. . . .[paragraph 52]
53. The petitioner’s actions since he entered Israel reflect the fact that he continues his activity to publicly advance the anti-Israel boycott, if not now on the platform of conferences and university panels, then by the circulation of his calls in support of the boycott primarily on his Twitter account in addition to other means.
54. Thus, for example, as previously stated, the petitioner took part in activity to expel the Israeli soccer teams from the world soccer organization [FIFA] and even traveled to Bahrain for this purpose, the petitioner encourages the divestment of investments in Israeli banks and several times on Twitter expressed his support for the company Airbnb’s decision to remove from its listings properties located in Judea and Samaria. [CAMERA’s translation]

CAMERA communicated this information to Haaretz, and an initial change May 1 to the online article continued to err:

However, the court was presented no evidence to suggest that Shakir actively supported the BDS movement since he began working for Human Rights Watch. 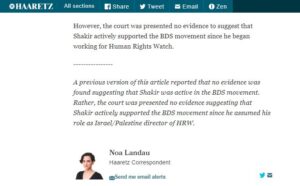 In addition, a note appended to the article got the story wrong, stating:

In response to further communication with Haaretz, editors again amended the digital article, completely removing the erroneous claim that the court received no evidence of Shakir’s BDS activity, including after he assumed his Human Rights Watch post in the region.
The note commendably appended to the article clarifies:

A previous version of this article incorrectly reported that no evidence was found suggesting that Shakir was active in the BDS movement after he assumed his role as Israel/Palestine director of HRW.

The misinformation apparently arose due to the fact that editors lifted background information from earlier articles which appeared before the district court’s April 16 ruling. Previously, the Interior Ministry had stated that there was no information indicating that Shakir had been involved in BDS activity since he assumed his role as Israel and Palestine director at Human Rights Watch.
Donate Now