With the new year, The Los Angeles Times, much like The New York Times, has unrolled a marketing campaign leveraging the proliferation of “fake news.” The message is that unlike those “shady news” sources that “sound legit” but carry clickbait, The Los Angeles Times provides “trusted journalism,” “truth,” and “stories that deliver.” 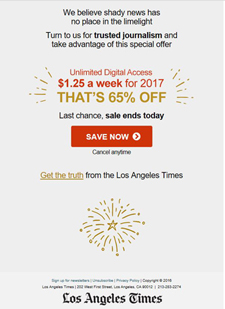 Meanwhile, last week CAMERA flagged a Los Angeles Times news story which discussed how “Members of Netanyahu’s coalition are pushing for a parliamentary bill to annex [a large West Bank settlement called] Maale Adumim,” but which never revealed the fact that Prime Minister Netanyahu, backed unanimously by his Security Cabinet, shelved the bill. The article also noted newly issued Jerusalem building permits, but only mentioned those for Jewish neighborhoods, completely ignoring those granted for Arab neighborhoods. Shady news or trusted journalism? A story that delivers? An editor defended the article as “factual and fair.”
This week, a Los Angeles Times review of a new book by George J. Mitchell and Alon Sachar (A Brief History of Israeli-Palestinian Negotiations and a Way Forward in the Middle East) also falls short of the standards that one would expect from trusted journalism (“Hoping peace will find a way; A book by George Mitchell, who spent two years negotiating with Israel and Palestine, outlines his ideas“).
First, Zach Dorfman, a senior fellow at the Carnegie Council for Ethics in International Affairs, errs: “But Israel is also an occupying power, subjecting millions of Palestinians in the West Bank (and, with important distinctions, in East Jerusalem) to a military regime. . . .” Eastern Jerusalem, neighborhoods of the city beyond the pre-1967 armistice line (or “Green Line”),  is ruled by Israeli law, not by a military regime.
Second, Dorfman refers to the southern town of Sderot, subjected to years of Palestinian rocket attacks from the Gaza Strip, as “populated almost exclusively by Mizrahi Jews (that is, Jews of Middle Eastern descent. . . .” Israel’s Central Bureau of Statistics does not maintain population figures based on ethnicity, but the Sderot Media Center details:

Sderot was founded in 1951 as a transit camp for Mizrahi immigrants fleeing as part of the Jewish exodus from Arab and Muslim countries. They lived in the desert, housed in tents and shacks, until the government began constructing small apartments for the residents in 1954. Throughout the following decades, different immigrant groups flowed in from Romania, Ethiopia, Bucharia, and the Ukraine, culminating in the Russian aliyah in the 1990s, during which the city absorbed so many new immigrants that Sderot doubled its population. The diversity of immigrants absorbed means that Sderot is not without its social and economic problems. Sderot is a city of many different immigrant communities, complicating social cohesion, but it is also one that is deeply economically depressed.

Natal, the Israel Trauma Center For Victims of Terror and War, carried out a study in Sderot, conducting interviews in both Hebrew and Russian. Why would there be a need for Russian interviews if the community is “almost exclusively Mizrahi Jews”? In addition, some of the young victims of Palestinian rocket attacks were Ethiopian.
Finally, the book review, including the subheadline, photo caption and the text itself, is marred by “shady” usage of “Palestine” terminology, contrary to the paper’s standards. For instance, in referring to negotiations with the Palestinians, the (print) headline states: “Hoping peace will find a way; A book by George Mitchell, who spent two years negotiating with Israel and Palestine, outlines his ideas.” Likewise, a photo caption accompanying the article online and print wrongly refers to “A separation barrier between Israel and Palestine in the West Bank.” Similarly, Dorfman refers to “the first [United Nations Security Council] resolution on Israel and Palestine in almost eight years.”
Following the 1948 war and the dissolution of the Palestine Mandate, there was no longer an entity called Palestine. Thus, the term “Palestine” is incorrect. Since the Oslo Accords in the 1990s, those West Bank areas under the control of the Palestinian Authority are often referred to as “Palestinian territories.” The Palestinian government is referred to as the “Palestinian Authority” (ie, Mitchell was negotiating with Israel and the Palestinians, or Israel and the Palestinian Authority.)
The Los Angeles Times has previously corrected erroneous references to the West Bank or to the Palestinian Authority as “Palestine.” For instance, a Sept. 24, 2014 correction stated:

Gerald A. Larue: In the Sept. 22 LATExtra section, the obituary of USC religious scholar Gerald A. Larue referred to archaeological digs in Palestine. The digs occurred in Israel and the West Bank.

Carter speech: An article in Friday’s California section included a subhead saying former President Carter urged students to travel to Palestine. The area referred to is the Palestinian territories.” (May 5, 2007)

Istanbul Biennial — An article in the Dec. 11 Calendar section about an international art exhibition included Palestine in a list of nations from which artists had contributed works. It should have said the Palestinian territories.

And, in 2004, The Times
issued the following corrections:

Bail bonds investigation–An article in the California section Sunday about the arrest of American Liberty Bail Bonds owner Adnan ‘Dan’ Yousef and members of his family reported that they had ties to Palestine. The reference should have been to the Palestinian territories.” (Sept. 29, 2004)
Palestinian film–Articles about Palm Springs International Film Festival that ran in Calendar on Dec. 20 and Jan. 8 referred to the movie ‘Divine Intervention’ as coming from Palestine. They should have said the Palestinian territories.”  (Jan. 13, 2004)

The book review ran in the Calendar section and likely did not receive the same level of vetting that a story from the foreign desk would receive. CAMERA has been in touch with Times editors to request corrections. Stay tuned for an update.
Donate Now