It is not reasonable, or responsible, to expect people who study or teach at colleges and universities in the United States to unquestionably support American foreign policy in the Middle East or the rest of the world.

Debate is crucial to good governance.

Still, it would be nice if the folks who learn and work at institutions of higher learning at least made a passing effort to describe the context in which U.S. officials operate. All too often, the academy seems to be in the grips of ideologues who seem intent on putting everything the United States (or Israel) does in the worst possible light and on portraying other countries in the world as innocent victims of American imperialism. For these commentators, American foreign policy explains just about everything that goes wrong in the countries they write about.

It would be beneficial if, in their debates and discussions regarding events taking place overseas, academics addressed some of the problems endogenous to the countries they write about and not blame everything on the U.S. or Israel. 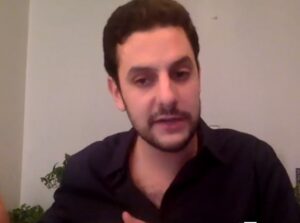 A tendency to blame everything on the U.S. and to deny local governments’ responsibility and agency in causing human suffering was on display at a presentation on Iran and the COVID-19 virus given by Alex Shams, a PhD Candidate in the University of Chicago’s Department of Anthropology, on April 8, 2020.

Shams, whose hatred of Israel is well-documented, was speaking under the auspices of Harvard University’s Weatherhead Center for International Affairs.

During his presentation, titled “Quarantine, 5 Weeks In: Understanding Iran’s Experience With the Coronavirus,” Shams, who was speaking from Tehran, tried to blame Iran’s struggles with the COVID-19 virus on the United States.

He did this by declaring that the sanctions imposed by the United States in an attempt to stop it from obtaining nuclear weapons are preventing the delivery of badly needed medical supplies to the country and hindering its ability to impose a quarantine to stop the spread of the virus because of a government budget shortfall.

During his talk Shams, who once Tweeted that Israel has a culture that “celebrates death,” declared that “one of the big reasons” for Iran lacking the funds to impose a quarantine is because “the Trump Administration violated the Iran Nuclear Deal . . . and reimposed sanctions,” causing the Iranian economy to shrink and a “massive gap in the government budget.”

Predictably, Shams, who once tweeted, “Hey Ho, Zionism has got to go,” fails to report that there were a number of well-documented breaches perpetrated by Iran long before Trump pulled out of the deal in May 2018.

Shams, who once accused Israel of raping and torturing Palestinian terrorist Rasmeh Odeh, gave himself some wiggle room when he used the phrase “one of the big reasons” to describe how U.S.-imposed sanctions have prevented the Iranian government from imposing a quarantine, but still, he was not entirely honest with his listeners.

For example, the Iranian government has sent millions to its terror proxies in Lebanon. According to the U.S. State Department the mullahs have sent a total of $16 billion to Iran’s proxies since 2012. This money could have been spent on healthcare instead of promoting Shia imperialism.

The billions the mullahs have sent outside the country to terrorize Israelis while they ignored needs at home prompted Iranians to chant, “We have no money or fuel, to Hell with Palestine!” in the streets in late 2019. How can Shams, an anthropologist in training, ignore this? In his talk, Shams places great emphasis on the COVID-19 related propaganda used to unite the Iranian people behind the regime, but very little on the protests against the regime. This is irresponsible, but it’s not all that surprising coming from a “scholar” who promotes Israel’s destruction by tweeting the slogan, “From the River to the Sea, Palestine will be free.”

Shams also failed to report that while it has tried to blame foreign sanctions for the suffering caused by COVID-19, the Iranian government refused an offer of medical supplies from the U.S. government. It also kicked out a group from Doctors Without Borders who were trying to help Iran deal with the virus. Iranian leaders did these things even as they complained about the impact of sanctions on their ability to respond to COVID-19.

Now, these facts that Shams omitted would seem relevant to any honest discussion of how Iran is coping with the COVID-19 pandemic, but his talk descended into outright fabrication when he declared that Iran cannot get ventilators or personal protective equipment to respond to COVID-19 because it “is effectively cut off from the global financial system due to sanctions.” He declared, “There’s actually no way for Iranian hospitals to buy [this] equipment, especially anything like ventilators [or] hazmat suits that can be considered ‘dual use’ meaning that the military could use I guess to protect their soldiers in the case of war. Basically there’s no way for Iran to get those thing.” Part of the problem seems to be that banks don’t want to be involved with purchases for fear of running afoul of U.S. sanctions.

Later, Shams declared that while there’s a lack of protective gear for medical professionals in the U.S., in the Iranian case, “it’s really aggravated … because sanctions prevent import of gear except in limited quantities from China or local protection, which was relatively limited, but has now been ramped up.”

In January 2020, the BBC reported that the Swiss government established a channel to provide for exactly the type of transactions Shams said can’t happen. The article reports:

The Swiss government said the new payment mechanism was aimed at ensuring that companies based in Switzerland had a “secure payment channel with a Swiss bank through which payments for their exports to Iran are guaranteed.”

“In this way, Switzerland is helping to supply the Iranian population with agricultural commodities, food, medicines and medical equipment. This is in keeping with Switzerland’s humanitarian tradition,” it said.

Under the rules of the new mechanism, the US provides assurances that transactions are not violating sanctions, the Swiss government statement added.

In turn, exporters and participating banks provide information on their business activities and partners in Iran.

Moreover, PressTV reported in mid-March that Iran had imported close to 1,000 ventilator machines from overseas and was in the process of bringing another 1,000 into the country. Now Iran appears to be exporting ventilators, and had been exporting them to other countries long before the COVID-19 crisis.

It appears that the Iranian government has been playing a double game that, as an anthropologist, Shams should have detected.

A responsible commentator would highlight, and not obscure, these contradictory messages because they reveal the nature of the regime under which the Iranian people labor.