CAMERA’s Israel office yesterday prompted correction of a Nov. 13 Los Angeles Times print edition article (and online here) which had incorrectly blamed Israel for unpaid salaries of civil servants in the Gaza Strip. In fact, the Palestinian Authority, ruling in the West Bank, cut and withheld the Gaza salaries.

On Thursday, Qatar brought desperately needed cash into Gaza, where civil servants have not received full salaries for months and, in some cases, years, as a result of the air, land and sea blockade maintained by Israel for nearly a dozen years, since Hamas took over the territory. (Emphasis added.) 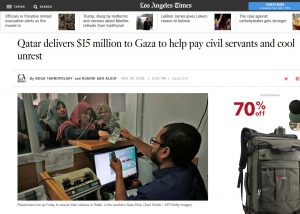 The underpayment, or lack of payment of salaries in Gaza, has nothing to do with the Israeli blockade, and everything to do with the internal Palestinian dispute between the Palestinian Authority and Hamas. As Tarnopolsky, along with Rushdi Abu Alouf, accurately reported just a few days ago (“Qatar delivers $15 million to Gaza to help pay civil servants and cool unrest“):

But the problems in Gaza also stem from deteriorating relations between Hamas, which the U.S. and its allies classify as a terrorist group, and the Palestinian Authority, the internationally recognized Palestinian government that is based in the occupied West Bank and responsible for paying the salaries of civil servants.

The two sides have been at odds since Hamas drove the Palestinian Authority out of Gaza in a violent takeover more than 11 years ago.

Over the last year, amid a failed effort to form a unity government, the Palestinian Authority has enacted harsh punitive measures against Hamas. Water purification systems and other infrastructure have gone without maintenance. Many families have had electricity no more than 4 hours a day.

And more than 40,000 civil servants have not received a full salary in months, with some not having been fully paid since 2013.

A tense standoff with Fatah, the secular party that controls the Palestinian Authority but was driven out of Gaza by Hamas in 2007, has compounded the misery. The West Bank-based government has slashed the salaries of thousands of its employees in Gaza, among other punitive measures.

Numerous other media outlets have also explicitly and accurately reported that Mahmoud Abbas’ Palestinian Authority is responsible for the unpaid Gaza Strip salaries.

By cutting Gaza’s supply of electricity and slashing salaries of tens of thousands of authority employees who live in Gaza, Mr. Abbas helped precipitate the financial collapse and brewing humanitarian crisis that Israel, Qatar, Egypt and the United Nations hope to ameliorate.

The Associated Press reported this week:

Abbas is fearful of any political settlement that would separate Gaza from the West Bank and entrench Hamas rule.

He has slashed the salaries of thousands of former government workers in Gaza and cut fuel subsidies to pay for electricity, all in an effort to step up pressure on Hamas.

The Palestinian Authority, trying to force Hamas to turn over control of security forces in Gaza, has imposed its own punitive measures, including withholding funds for the territory’s only power plant and halting the transfer of salaries to authority employees in Gaza.

The Palestinian Authority cut salaries for its staff in Gaza by 20 percent on Thursday and failed to make up for skipping the previous month’s pay, leaving civil servants in the impoverished territory fuming they were pawns in a factional power struggle.

Gaza attacks: In the Nov. 13 Section A, an article about missile launches from the Gaza Strip said that civil servants in Gaza were not paid their full salaries because of Israel’s blockade. The Palestinian Authority, not Israel, cut funding for salaries in Gaza.

Blaming the Israeli blockade for unpaid Gaza salaries, which are the result of an internal Palestinian dispute and unrelated to Israeli measures, calls to mind the seminal 2014 column by the then New York Times’ readers editor Margaret Sullivan (“The Conflict and the Coverage“). About her paper’s coverage of the Israeli-Palestinian conflict, she urged:

Diversify. Strengthen the coverage of Palestinians. They are more than just victims, and their beliefs and governance deserve coverage and scrutiny.

Though The New York Times has since eliminated Sullivan’s position, the wisdom of her words lives on. So, too, unfortunately, does the media tendency to skew the narrative, casting Palestinians as Israel’s perpetual victims, even when the reality suggests otherwise.