Just a day after a New York Times report obscured key details  about Hamas rocket attacks — that they are fired by a terror organization,  intentionally target civilian centers, and  amount to war crimes — the newspaper published another piece that concealed Hamas responsibility, this time for the situation in the Gaza Strip which it rules.

Specia’s preface, “Here are some key things to know about the conflict” might more aptly be rephrased, “Here are the points the New York Times wants to emphasize regarding the conflict.”

The first question asked is “why did tensions rise?”

In setting out a timeline to “explain” why tensions rose, the reporter employs the newspaper’s oft-used artifice of couching deadly Palestinian violence in the passive voice while at the same time using the active voice when referring to casualties of Israeli military operations. The result is a muddled, incoherent paragraph that makes it unclear that Palestinians bear direct responsibility for one death. The reporter Specia writes:

Hamas and other armed groups responded with force, launching rockets and mortar shells into southern Israel. One Palestinian civilian was killed inside Israel on Monday and Israeli airstrikes killed at least seven Palestinians in Gaza on Monday and Tuesday.

The reporter could have easily clarified Palestinian responsibility by noting that “Hamas … responded with force, killing one Palestinian civilian inside Israel.” But, then again, this sort of clarity may have been exactly what editors were trying to avoid.

The second question asked is “how did Gaza get there?”

Using another popular reporting ploy, Specia removes all agency from Hamas, instead explaining how Gaza arrived at its current situation by referring to actions attributable to Israel: In 1967, “Israel seized the territory, sent in troops and established Jewish settlements,” in 1994, “the first Gaza-Israel fence went up,” in 2005, “Israel withdrew from Gaza… but it maintained tight control over the border.” It is “the border fence, which critics say virtually turns Gaza into an open-air prison” that is said to be responsible the “friction ever since,” as well as “the blockades imposed by both Israel and Egypt since Hamas seized power 11 years ago.” 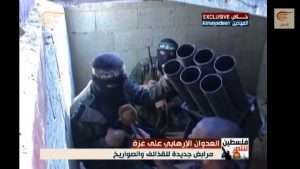 Hamas members with weaponry in their tunnels

Why were the fence built and blockades established? What about Hamas’ refusal to recognize Israel or accept any peace accords as it remains sworn to Israel’s destruction, positions that have caused the extremist Hamas government to be isolated internationally? What about  Hamas’ terrorist activities, amassing of arms, digging of terror tunnels and continued attacks with rockets, missiles and IED’s into Israeli territory?

There is no mention of any of this, because in Specia’s account, the terrorist group that runs Gaza plays no role in the current situation in Gaza.

To underscore and bolster the point that any dangerous, violent or negative situation is the result of Israeli but not Palestinian actions, Specia tops off her “analysis” with a disingenuous quote by partisan Christopher Gunness, known more for his anti-Israel propagandizing then his honesty:

“The humanitarian situation was already disastrous,” said Christopher Gunness, the chief spokesman for Unrwa, the United Nations agency responsible for the welfare of Palestinian refugees. ”There’s more than a decade of an illegal blockade. It’s collective punishment.”

Gunness, despite the fact that he works for a UN agency, is apparently ignorant of a UN report, the Palmer Report, that noted the legality of Israel’s blockade:

“Israel faces a real threat to its security from militant groups in Gaza. The naval blockade was imposed as a legitimate security measure in order to prevent weapons from entering Gaza by sea and its implementation complied with the requirements of international law.