The New York Times often downplays Palestinian extremism or violence if the emphasis can’t be placed on Israel, Israeli counterattacks, or Israeli blame for ongoing violence. A case in point is the attention given to the escalating violence from the Gaza Strip.

From start to finish, today’s Times article about fighting between Hamas and Israel downplays the extent of Hamas violence while suggesting Israel is responsible for the terror group’s rocket attacks. Meanwhile, Israeli retaliatory strikes on Hamas targets are portrayed as being no different than the Hamas’s indiscriminate attacks on Israeli civilians — largely because the article fails to mention even once that Hamas is a terror group, or that it is sworn to Israel’s destruction, or that the rockets it fires are indiscriminately lobbed toward Israeli civilians in their towns and cities in violation of international law.

On Sunday, Prime Minister Benjamin Netanyahu assured Israelis weary of conflict with Palestinians in the Gaza Strip that he was “doing everything I can in order to avoid an unnecessary war.”

Twenty-four hours later, Israel appeared to be on the brink of just that. [emphasis added]

But by what objective measure did the Times news reporter determine that a war, however unfortunate, would be “unnecessary”? Is the takeaway that it is unnecessary for Israel to gather intelligence on terrorists sworn to the country’s destruction? Or that it would it be unnecessary if Israel took military action to stop the rockets raining down on its citizens? Halbfinger doesn’t specify. He just editorializes, and does so in a way that casts Netanyahu leading the region toward an unnecessary war. 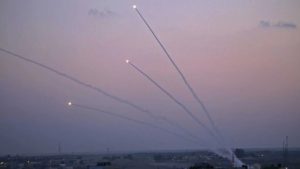 While the opening of the piece frames the conflict as being Netanyahu’s responsibility, its closing paragraphs reinforce the message of moral equivalence between Hamas’s indiscriminate rocket fire and Israeli counter strikes. “On both sides of the Gaza border,” Halbfinger writes, “civilians caught up in the fighting said they felt terrorized by it.”

There is no doubt civilians in Gaza and Israel alike are distressed by the explosions around them. And it’s reasonable for a reporter to document the fears of both Israelis and Palestinians. But it is specious to describe Israel’s civilians as “caught up in the fighting” just the same as Gaza’s civilians.

Unlike Israel, Hamas is targeting civilians, its imprecise crosshairs covering entire towns. Israel, in response, has targeted the military and information assets of the terror group. So yes, Gaza’s civilians are “caught up” in the fighting around them. Israeli civilians, though, are targets of that fighting.

The New York Times, with its misplaced “both sides” language, conceals that substantial and important difference, and it misses every other opportunity throughout the article to make the distinction clear. Readers are told “armed factions” (rather than internationally designated terror organizations) mounted a rocket barrage “across much of southern Israel,” and are left to guess whether those rockets targeted military installations or civilians.

Yes, Gaza’s civilians are “caught up” in the fighting around them. Israeli civilians, though, are targets of that fighting.

About Israeli strikes, by contrast, the author was precise with detail, noting that the country “hit scores of military posts and weapons caches across Gaza, but also leveled a Hamas television station, radio station and office building” — a “but” that suggests there is something questionable in Israel’s targeting decisions.

Later, the article revisits the targeting of the Hamas television station with dueling statements by Hamas and Israel — the former called the strike an act of “barbaric aggression,” while the latter explained that the TV station contributes to Hamas’s military campaign — but Halbfinger neglected to point out that the during the Obama administration, the U.S. designated the station as a terrorist entity, pointing out that its programs are “designed to recruit children to become Hamas armed fighters and suicide bombers upon reaching adulthood.”

Later, the author has another chance to point out that Palestinian rocket attacks are indiscriminate, and thus war crimes. But again, he refers to the target of Hamas attacks in vague geographical terms: “More than 400 rockets and mortar shells were fired into Israel, and the Israeli military said it had struck more than 70 military targets in Gaza belonging to Hamas, which governs the territory, and to Palestinian Islamic Jihad.” At what “in Israel” were Hamas rockets fired? The answer — at everything and anything — is again concealed.

Nor did the piece mention that those Palestinian groups named as targets of Israeli fire — Islamic Jihad and Popular Resistance Committees— are like Hamas viewed internationally as terror organizations. Why not? Perhaps because that gets in the way of the “both sides” framing.

In the same piece, Halbfinger conceals other examples of Palestinian violence when recounting the past several months of conflict between Hamas and Israel. “The fighting threatened to scuttle months of multilateral talks aimed at calming the Israel-Gaza border, where protests since March have been met with a lethal Israeli response,” Halbfinger reported. “Some 170 Palestinians have been killed and thousands more wounded.”

Not for the first time, the New York Times tells readers Israel responded with lethal force to mere “protests.” And not for the first time, that anti-Israel messaging conceals that these “protests” were accompanied by Palestinian violence — fatal sniper fire, the lobbing of IEDs and firebombs, the widespread arson attacks that destroyed Israeli agriculture, and violent efforts to infiltrate the border.

That doesn’t not come as a surprise. Times editors have admitted they are comfortable describing gunmen as “protesters.” And that’s exactly what’s required to write a piece about an onslaught of Hamas rockets lobbed at Israeli towns in which, outrageously, Israel is the only side portrayed as targeting civilians.