In response to the concerns discussed here, a New York Times editor insisted it is accurate and appropriate to describe active shooters and those planting bombs as "protesters" killed by Israel. An NPR editor likewise stood by the outlet's language — even though NPR has previously taken issue with inappropriate use of the word "protesters."

NPR knows a riot when it sees one.

After French supermarket customers pushed and punched their way to heavily discounted jars of Nutella, the public radio giant described the scene as a “riot.”

In a Morning Edition report out of Kenya, an NPR anchor referred to stone-throwers as rioters. “I’m at a polling station, and it’s surrounded by protesters, by rioters who are throwing rocks at the polling place,” she exclaimed.

And when Pakistani men “smashed police cars and tried to set fire to the local stations,” this, too, was straightforwardly labeled a “riot” by NPR. 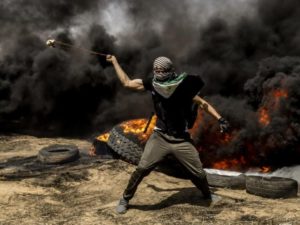 But in recent weeks, crowds of men hurling stones, throwing firebombs, attacking a border fence, and setting fire to fields and buildings were characterized in a strikingly different way. These men were Palestinians in Gaza. The object of their rage was Israel. And for NPR journalists across the network’s news programs, there seemed to be a policy of avoiding the R word.

“Israeli forces killed at least 60 protesters and injured more than 1,000 on Monday, firing on demonstrators who had massed along its roughly 40-mile border with the Gaza Strip,” NPR’s Colin Dwyer reported, although Hamas later admitted that 50 of the dead were its operatives, not “regular people,” and although Israel noted that the day’s casualties included eight armed Hamas fighters who opened fire on Israeli soldiers while trying to sneak across the border.

The perversity of NPR’s language choices was spectacularly showcased in an Orwellian sentence that describes bombers as protesters: “The army says it killed three protesters who were trying to set a bomb next to the security fence in Rafah,” NPR reported. If only they wanted to buy discounted Nutella instead of bomb Israelis, the reporter might have had fewer misgivings about using accurate language. (Notwithstanding NPR’s characterization, the army used the word “terrorist,” not protester, to describe those setting the bomb.)

NPR is hardly the only outlet to insist rioting Palestinians, and even armed Hamas operatives, are mere protesters. In the past, New York Times reporters have referred to stone-throwing and arson attacks, from Berkeley to India, as riots. Gaza’s rioters, though, have been described as “protesters” and “demonstrators.”

Let’s be clear: There have been plenty of Palestinians, gathered around tents set up hundreds of yards from Gaza’s border with Israel, who can be described as peaceful protesters, despite their radical goal of “liberating” Israel from the Israelis. But it should be equally clear that those Palestinians are not the ones involved in clashes with Israeli soldiers, and not the ones described in media casualty counts. As the Associated Press had straightforwardly reported, “During the weekly Friday marches, most protesters have remained in the five sit-in tent camps, but smaller groups have moved toward the fence, throwing stones, hurling firebombs or burning tires.” Of particular concern to Israelis are the attempts, often by fighters from Hamas and other terror groups, to damage or cross the fence. The concern is warranted. Hamas is most well known for its deadly suicide bombing attacks targeting Israeli buses, cafes, and markets.

But the New York Times has described both groups — the violent crowds and those lingering by the tents — interchangeably as protesters. For example, after mentioning that Palestinians have brought infants to “the protest,” reporter Declan Walsh used that same word to describe the violence closer to the border fence, several football field-lengths away: “Entire families had come along, some snacking on ice cream or sandwiches as the protests raged hundreds of yards away.”

The newspaper has even cast Hamas gunmen killed in battle as “protesters.” In a May 15 article about the violent clashes a day earlier, during which 60 people were killed, the paper acknowledged Israel’s account of a gunfight:

Eight of the dead, the army said, were armed Hamas militants in civilian clothes who tried to storm the fence in northern Gaza and attacked Israeli forces with grenades and pipe bombs before being killed in a shootout. A photograph showed what the military said was an Israeli battalion commander’s armored vehicle pockmarked with Kalashnikov fire. Another three militants were killed while laying an explosive device in the south, the army said.

And yet, the newspaper continued to tell readers, again and again, that Israel killed 60 “protesters” that day.

Unwittingly, the Times itself compellingly made the case that it opts for language in line with the Palestinian narrative. To highlight the “radically different language used by the two sides,” a reporter explained that “what Palestinians called peaceful demonstrations, the Israeli military described as ‘violent riots.’” The New York Times sees riots, too — in places like Berkeley and India. In Gaza, they prefer the word preferred by Palestinians.

On @NPR, @NPRinskeep just asked a Gazan with a kite w a swastika on it what it means to him. "The Jews go crazy when you mention Hitler." Steve Inskeep asked if he knows the Israelis are using the swastikas to discredit Gazans. "It's what we mean. We want them to burn," he said.

Across the news media, too many have followed the same script. By relying on careless language that fails to distinguish between protesters eating ice cream far from the border, rioters flying swastika-emblazoned kites that deliver firebombs into Israeli farming communities, or armed members of internationally designated terrorist groups trying to breach the border, these journalists risk leaving their audience with the mistaken sense that Israel has been opening fire on assemblages of sign-carrying, slogan-chanting Palestinians. (Recall NPR’s language, and note the imagery it evokes: “Israeli forces killed at least 60 protesters” when “firing on demonstrators who had massed along its roughly 40-mile border with the Gaza Strip.”)

It’s a misimpression that, understandably enough, might enrage news consumers who are led to believe Israel sees peaceful assembly as a capital offense. Instead, that misimpression, and the media’s role in cultivating it, should trouble those who believe in the need for a well-informed population, and who understand that to have that, we need accurate, precise, and fair-minded reporting.