On May 14, the New Yorker ran an opinion piece by one of its staff writers, John Cassidy. The headline read, “Israel Kills Dozens of Unarmed Protesters in Gaza as Jared Kushner Speaks of Peace, in Jerusalem.” 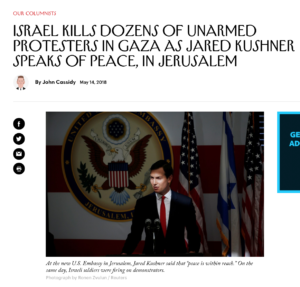 As the article itself notes, however, the IDF stated that “the rioters are hurling firebombs and explosive devices at the security fence and at IDF troops and are burning tires, throwing rocks and launching flaming objects with the intention of igniting fires in Israeli territory and harming IDF troops.”

While many other of the “protestors” may have been unarmed, it’s unclear how the New Yorker knows whether those killed were armed or unarmed. The IDF follows rules of engagement and does not fire indiscriminately. It seems far more likely, then, that of the tens of thousands of protestors/rioters/those trying to breach the fence, most of the approximately 60 who were killed were the ones who were armed.

A Hamas official has also claimed that 50 of those who were killed were Hamas members. Palestinian Islamic Jihad has claimed others. Even prior to that, the IDF had identified 24 of them as members of either Hamas or Islamic Jihad. The fact that they were members of terrorist organizations is a strong indicator that they were either trying to breach the fence or using weapons, or both.

Despite repeated contact from CAMERA, the New Yorker has refused to correct these misleading statements.

After this article was published on Friday, some of CAMERA’s members contacted the New Yorker about its egregious headline. In response the New Yorker has updated it. 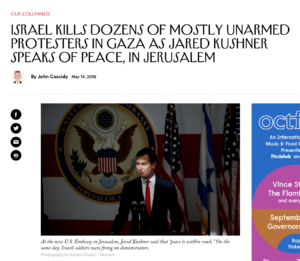 The new headline is somewhat improved, but so ambiguous it’s hard to know precisely what it means. Is the New Yorker trying to say that each person killed was only a little bit armed? Or that most of those killed were unarmed? If so, it’s still unclear how the magazine determined this, especially since Hamas has claimed 50 of the dead as its members. More likely, the New Yorker is trying to describe the crowd of protesters/rioters/combatants as mostly unarmed, but the new headline is so poorly constructed as to still be misleading. The implication is still that those killed were “mostly unarmed.”