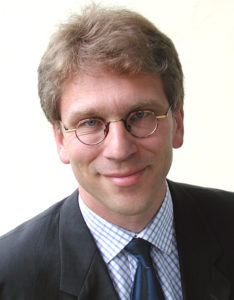 Olav Fykse Tveit, the General Secretary of the World Council of Churches issued a statement about the violence surrounding the “March of Return” that portrays Jewish self-defense as a bigger problem than attacks on the Jewish homeland.

The World Council of Churches (WCC) is a Christian ecumenical organization with a troubling history of shilling for the Soviet Union during the Cold War. The WCC’s pro-Communist leanings are so well known that they were highlighted in an episode the FX spy-drama, The Americans. The episode, which aired during season five, was titled, appropriately enough, “The World Council of Churches.”

Sadly enough, the WCC also has a long history of shilling and covering for Israel’s (and America’s) enemies in the Middle East. WCC officials deny it but the organization has given support to the boycott, divestment and sanctions movement, which seeks to turn Israel into a pariah state. In its witness about the Middle East, the WCC roars like a lion at Israel while remaining relatively silent about the destruction of religious and ethnic minorities at the hand of jihadist organizations in the Middle East, particularly in Iraq and Syria.

In short, the WCC, which gave corrupt witness about life in the Eastern Bloc countries during the Cold War, has offered an equally corrupt (or “lethal”) narrative about the Middle East over the past few decades. The most recent expression of the WCC’s corrupt witness about life and conflict in the Middle East came on May 16, 2018 when the organization issued a statement penned by General Secretary Olav Fykse Tveit condemning “excessive violence against civilian protesters in Gaza.”

Tveit’s statement, titled “WCC calls for a just peace and an end to impunity in the Holy Land,” is yet another example of the WCC’s corrupt witness when dealing with issues related to the Jewish state. Like many other Christian statements about the conflict, the text expresses more animus toward efforts to protect Jewish safety and welfare than it does toward efforts to place Jews in danger.

The text, declares that the “protesters” who gathered at the barrier between the Gaza Strip and Israel were “exercising their civil rights to express their objection at the current situation for them as Palestinian people.” The text also declares that “unarmed civilians — including children — are shot at with live ammunition, even killed and many injured — cannot be defended legally or morally as an expression of “the right to self-defense of a state.”

The WCC got it wrong and egregiously so. How do we know this? Because leaders of Hamas, the terror group that organized the riots, said so. In the days after the WCC issued its statement, these leaders issued a number of statements that indicated that the “protests” were not intended to be peaceful. In fact, one Hamas expressed the hope that Palestinians would be killed in the confrontations.

On May 17, 2018 Salar Bardawi, a Hamas leader told a Palestinian journalist that of the 62 people who were killed a few days earlier 50 were Hamas members. That same day, another Hamas leader, Mahmoud al-Zahar admitted in a video captured by MEMRI that all the talk about the confrontations at the Gaza fence being part of nonviolent and peaceful protests was, in his words, “a clear terminological deception” — in other words, a lie. Al Zahar continued:

On May 18, 2018, MEMRI released a clip of Hamas leader Yahya Sinwar describing how the Palestinians offered “the sacrifice of their children as an offering for Jerusalem and the Right of Return.” In other words, a Hamas leader admitted that human shields are part of its strategy.

Sinwar went on to say:

When we decided to embark on these marches, we decided to turn that which is most dear to us – the bodies of our women and children – into a dam blocking the collapse in Arab reality, a dam to prevent the racing of many Arabs towards the normalization of ties with the plundering entity, which occupies our Jerusalem, plunders our land, defiles our holy places, and oppresses our people day and night.

Another troubling aspect of the WCC’s statement is that it blames the riots on the Trump Administration’s decision to move the U.S. Embassy to Jerusalem, declaring that the move “created a serious obstacle to any peace and just solution” to the conflict. In fact, the riots were, in the words of Hamas leader Ismail Haniyeh, part of an effort to destroy the Jewish state.

On April 9, 2018, The Times of Israel quoted Haniyeh as declaring that “Palestine and Jerusalem belong to us,” and that “We will break the walls of the blockade, remove the occupation entity and return to all of Palestine.”

In virtually all of its commentary about the conflict between Israel and its Arab and Muslim neighbors, the WCC expresses more concern over Jewish self-defense than attacks on Jews and their homeland. Its most recent statement penned by General Secretary Olav Fykse Tveit is no exception.

This is a scandal that brings shame on all of the approximately 350 churches that support the WCC.