In the past, the Los Angeles Times marked Israel’s birthday with an Op-Ed calling for its dismantlement via the so-called “one-state solution.” The paper didn’t bother to wait for the spring anniversary of the Jewish state’s founding, presenting its readers yesterday with another call for a “one-state solution.” Jonathan Kuttab‘s Dec. 20, 2009 Op-Ed (“Steps to Create Israel-Palestine“), like earlier pieces by Saree Makdisi (here and here) and Tony Judt  which called for the destruction of the Jewish state, rests on a number of basic factual errors and faulty assumptions.

From the Mediterranean to the Jordan River

Kuttab, a Palestinian attorney and activist, begins by fabricating: “With Israel in total control of the territory from the Mediterranean to the Jordan River and unwilling to relinquish a significant part of the land . . . ”
In fact, between the Mediterranean and the Jordan River lies the Gaza Strip which is fully under the control of Hamas—not Israel. Moreover, 40 percent of the West Bank is under the control of the Palestinian Authority. As for Israel’s alleged “unwillingness to relinquish a significant part of the land,” last week Ha’aretz published a detailed report and a map showing Ehud Olmert’s unprecedented offer to Mahmoud Abbas.

Former prime minister Ehud Olmert proposed giving the Palestinians land from communities bordering the Gaza Strip and from the Judean Desert nature reserve in exchange for settlement blocs in the West Bank.

According to the map proposed by Olmert, which is being made public here for the first time, the future border between Israel and the Gaza Strip would be adjacent to kibbutzim and moshavim such as Be’eri, Kissufim and Nir Oz, whose fields would be given to the Palestinians.

Olmert also proposed giving land to a future Palestinian state in the Beit She’an Valley near Kibbutz Tirat Tzvi; in the Judean Hills near Nataf and Mevo Betar; and in the area of Lachish and of the Yatir Forest. Together, the areas would have involved the transfer of 327 square kilometers of territory from within the Green Line.

Olmert presented his map to Palestinian Authority President Mahmoud Abbas in September of last year. Abbas did not respond, and negotiations ended. In an interview with Haaretz on Tuesday, Abbas said Olmert had presented several drafts of his map.

The version being disclosed Thursday in Haaretz is based on sources who received detailed information about Olmert’s proposals.

Olmert wanted to annex 6.3 percent of the West Bank to Israel, areas that are home to 75 percent of the Jewish population of the territories. His proposal would have also involved evacuation of dozens of settlements in the Jordan Valley, in the eastern Samarian hills and in the Hebron region. In return for the annexation to Israel of Ma’aleh Adumim, the Gush Etzion bloc of settlements, Ariel, Beit Aryeh and settlements adjacent to Jerusalem, Olmert proposed the transfer of territory to the Palestinians equivalent to 5.8 percent of the area of the West Bank as well as a safe-passage route from Hebron to the Gaza Strip via a highway that would remain part of the sovereign territory of Israel but where there would be no Israeli presence. 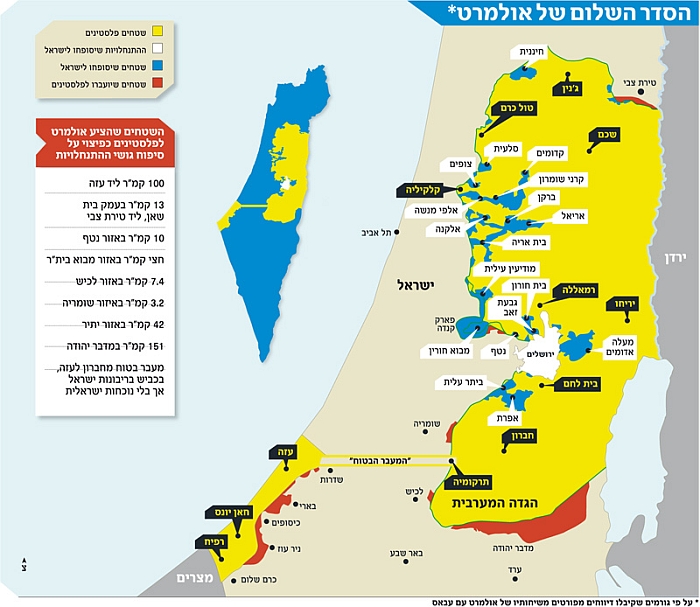 And although Jewish Israelis may control it now, birthrates suggest that, sooner or later, Jews will again be a minority in the territory.

What happens at that point is unclear, but unless continued military occupation and all-out apartheid is the desired path, now may be the time for Israelis to start putting in place the kinds of legal and constitutional safeguards that will protect all minorities, now and in the future, in a single democratic state of Israel-Palestine. This is both the right thing and the smart thing to do.

Given that the overwhelming majority of Palestinian population centers are under Palestinian control (either Hamas in the Gaza Strip, or the Palestinian Authority in the West Bank), there is no reason why future choices would either be military occupation or “all-out apartheid.” The majority of Palestinians currently live under their own governments. How would that status be endangered if more Palestinians than Israelis inhabit the area between the Jordan River and the Mediterranean, as Kuttab hypothesizes? Kuttab does not explain how he makes that leap.

Moreover, Kuttab’s rosy depiction of a protected Jewish minority living under a system of safeguards in a binational Israel-Palestinian would be laughable were it not so dangerous. He writes:

At the root of [Israelis’] fear was the belief that despite Israel’s best efforts to push Palestinians from land and property and to import Jewish settlers in their stead, the Arab population would keep climbing. And that, when the Arabs reached the 51% mark, the state of Israel would collapse, its Jewish character would disappear and its population would dwindle into obscurity.

Yet that scenario is not necessarily the inevitable result of either demography or democracy. Religious and ethnic minorities have successfully thrived in many countries and managed to retain their distinctive culture and identity, and succeeded in being effective and sometimes even dominant influences in those countries. Those who believe in coexistence must begin to seriously think of the legal and constitutional mechanisms needed to safeguard the rights of a Jewish minority in Israel-Palestine.

It is true that the experience of Israel with its Palestinian minority does not offer a comforting prospect. The behavior of the Jewish majority toward the Palestinian citizens of Israel has not been magnanimous or tolerant. Where ethnic cleansing was insufficient, military rule, land confiscation and systemic discrimination have all been employed.

First, since we are talking about minority rights in the Middle East under an Arab/Islamic majority, can Kuttab point to even one Arab or Muslim country in the Middle East where minorities thrive? (The thriving of religious and ethnic minorities in “many countries,” such as the United States, Canada, or Germany, is hardly germane to this discussion.) More to the point is the treatment of minorities in Arab and Islamic countries, the subject of a recent conference hosted by One Free World International last week. The Jerusalem Post reported:

Every three minutes a Christian is being tortured in the Muslim world, and in 2009 more than 165,000 Christians will have been killed because of their faith, most of them in Muslim countries, according to a human rights organization that is visiting Israel starting Sunday.

“Hamas digs up the bodies of Christians from Christian burial sites in the Gaza Strip claiming that they pollute the earth,” said Reverend Majed El Shafie, President of One Free World International (OFWI), who will head a delegation of human rights activists, members of parliament from Canada and religious personalities.

During their visit to Israel the delegation will hold a conference on human rights and persecuted minorities at the Van Leer Institute in Jerusalem. The conference will provide new statistics on the persecution of minorities in Muslim countries.

El Shafie said that between 200-300 million Christians are being persecuted in the world, 80 percent of whom lived in Muslim countries and the rest in communist and other countries. . . .

In the Palestinian Authority controlled West Bank, the situation is also bleak for the dwindling Christian population which is subject to land theft by Muslims, intimidation, job discrimination, forced “protection” monetary payments, and sexual harrasment. But there is persuasive evidence to suggest that Jews living in a Muslim-controlled “Israel-Palestine” would have greater concerns than discrimination and a dwindling population due to lower birth rates. The Hamas charter, for example, proclaims: “The hour of judgment shall not come until the Muslims fight the Jews and kill them, so that the Jews hide behind trees and stones, and each tree and stone will say: ‘Oh Muslim, oh servant of Allah, there is a Jew behind me, come and kill him.” And the organization, which rules the Gaza Strip and which is designated as a terrorist organization by the United States, does not simply bury that message in its official documents. Rather, it actively inculcates its youngsters with this genocidal imperative to murder all Jews via kid-friendly television programs featuring oversized talking animals. Nassur the Bear explains to young viewers of Hamas’ Al Aqsa TV on Sept. 22, 2009, “There won’t be any Jews or Zionists, if Allah wills. They’ll be erased. . . . We want to slaughter (Nidbah-hom) them, so they will be expelled from our land, right? . . .And if they don’t want [to go] peacefully, by words or talking, we’ll have to [do it] by slaughter.”
So when Kuttab promises safeguards such as closing down governmental offices for Jewish, Muslim and Christian holidays and making both Hebrew and Arabic official languages, Jewish Israeli skeptics have matters of a more existential nature on their minds. They have taken note, for example, of what happened when Hamas violently overthrew the Fatah government in the Gaza Strip, brutally murdering Palestinian Muslims — their own people, including women, children and the elderly — and tossing them from multi-story buildings. If “safeguards” could not ensure the safety of Palestinian Muslims affiliated with rival parties, what hope is there for the “sons of monkeys and pigs,” as Hamas is so fond of calling Jews?
As for Kuttab’s suggested safeguard of a rotating president in Lebanon, well, this speaks for itself. Lebanon is hardly a paradigm of civil harmony and tolerance among differing populations.
While Kuttab is mum on the persecution of minorities throughout Arab and Islamic countries, Hamas’ genocidal mission, and the group’s brutal treatment of its own co-religionists, he can think of one reason of why a binational state could be a problem — Israel’s treatment of its Arab minorities. He writes:

The behavior of the Jewish majority toward the Palestinian citizens of Israel has not been magnanimous or tolerant. Where ethnic cleansing was insufficient, military rule, land confiscation and systemic discrimination have all been employed.

While one could debate whether or not the Jewish majority has been sufficiently tolerant or magnanimous towards its Arab minority, the charge of ethnic cleansing against Arab citizens of Israel is completely unfounded. The Muslim population in Israeli has consistently grown over the years, and Israel is the one place in the Middle East where the Christian population is increasing, not dwindling.
As noted earlier, Kuttab is hardly the first to argue in polite language for the dismantlement of the Jewish state on the pages of the Los Angeles Times. Saree Makdisi’s May 11, 2008 (“Forget the Two-State Solution“) was one of the Op-Eds that prompted UCLA’s Judea Pearl to observe:

Each year, in preparation for Israel’s birthday, newspaper editors feel an uncontrolled urge, a divine calling in fact, to invite Arab writers to tell us why Israel should not exist.

This must give them some sort of satisfaction, such as we might have in inviting officials of the Flat Earth Society to tell us why the the earth is not, could not or should not really be round, and to do so precisely on Earth Day, lest the wisdom would escape anyone’s attention. . . .

Today we are witnessing a well-coordinated effort by enemies of coexistence to get people to envision, just envision, a world without Israel—the rest, they hope, will become history.

The American press seems to fall for it.