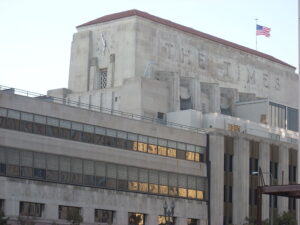 The Los Angeles Times has fabricated findings of the ongoing investigation into the killing of Iyad Halak, an autistic Palestinian, by Israeli police in eastern Jerusalem. In a front-page June 4 article, “George Floyd’s Death Becomes a Rallying Cry” (also online), Shashank Bengali invented:

In Israel, protests flared in Tel Aviv and Jerusalem after police shot and killed Iyad Halak, a 32-year-old autistic Palestinian man in East Jerusalem who was suspected to be a terrorist because he “was wearing gloves,” according to the official investigation.

The official investigation, being carried out by the Ministry of Justice, is ongoing. Therefore, there have been no statements, findings or conclusions about Halak being suspected of a terrorist because he “was wearing gloves,” or otherwise.
Indeed, as the AP story which appeared in The Times June 2 reported:

“We are really sorry about the incident in which Iyad Halak was shot to death, and we share in the family’s grief,” [Defense Minister] Gantz said. “I am sure this subject will be investigated swiftly and conclusions will be reached.” (Emphasis added.)

During a weekly cabinet meeting [Sunday], Netanyahu told his ministers he expects them to conduct a full investigation into the shooting. . .
“This is a person with disabilities, autism, who was suspected – as we know, wrongly – of being a terrorist in a very sensitive place. We all share in the grief of the family,” Netanyahu told the ministers. “I expect your complete examinations into this matter.” (Emphases added.)

It’s unclear whom Times correspondent Shashank Bengali was actually quoting regarding alleged suspicions based on the fact that Halak “was wearing gloves” – perhaps Salem Barahmeh, director of the Palestine Institute for Public Diplomacy, who weighs in on the case further down in the article – but certainly the direct quote, which significantly appears within the journalistically sacred quotation marks, is not drawn from any “official investigation,” contrary to the article’s claim
CAMERA yesterday contacted editors to request correction of the unfounded claim about the official investigation. Unfortunately, the paper’s recent track record on correcting has not been promising. Editors have yet to correct a May 13 article with the straightforward factual error that then outgoing Israeli Defense Minister Naftali Bennett has been Minister of Health. He has not. As CAMERA wrote to editors at the time, in addition to serving as Defense Minister, Bennett previously served as Minister of Education, Minister of Diaspora Affairs, Minister of Economy, and Minister of Religious Services. He has never served as health minister.
In addition, editors failed to correct the inaccurate claim in the same article that the “new Israeli government will have to tackle possible annexation of West Bank lands “by July 1.” (Emphasis added.) In fact, the coalition agreement permits advancement of legislation to advance the application of sovereignty in areas of the West Bank not before July 1.
Donate Now