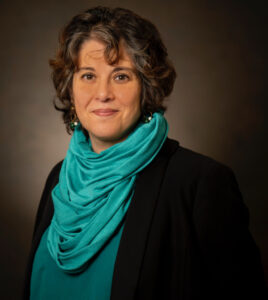 Get to know Masha Gabriel

Masha: Two things make it especially important. First, Spanish is the world’s second-most spoken language. Second, the Hispanic population is the second-largest ethnic group in the United States. Therefore, Latinos are becoming key players in the country’s political policies. Unfortunately, in general, Spanish-speaking media show a concerning anti-Israeli bias—most of the time due to lack of knowledge about Judaism and Israel. As a result, the news tends to misinform the public.

Masha: We monitor Spanish-speaking media in order to find and debunk fake information, lack of professionalism, and all these little lies or manipulations that create anti-Israel and antisemitic feelings in the readers or viewers.

Masha: I’ve always been very aware of the danger of antisemitism. In the past, people who hated Jews when it was “trendy” were not even aware of what their hatred meant—what it would lead to. They rationalized their hatred. Jews, they said, had too much money, killed Christian kids, controlled the world, dominated the media, and so forth. Those Jew haters truly believed those lies. Thankfully, hating Jews is not “cool” anymore. But hating Israel has taken its place—it’s the new “Jew to hate,” as it were. And the reasons that used to be offered to justify the hatred of Jews are nowadays updated to justify hatred of Israel. I always keep that in mind. As Jews, I believe we have a responsibility to remember our past; we must remember where we come from and see where we are now. That inspires me to keep going.

Masha: Working for CAMERA can be hard. On the one hand, the topics we investigate are rough and sometimes unpleasant. On the other hand, some journalists are not always open to criticism, often downright rude. Antisemites and anti-Israelis are not known for their nice approach. But I love to work at something I truly believe in and which I regard as profoundly necessary. My coworkers are also a source of inspiration. I love working with these sensible and sensitive people, sharing with them thoughts and concerns. Learning from them.

Masha: El País. The most influential news outlet in the Spanish-speaking world.

Masha: I like to spend time with my friends and family. Happiness is spending time with them.