Hassan Shibly
On Nov. 29, 2011, Hassan Shibly, a representative of the Muslim terrorist–affiliated group, CAIR, made a presentation to a world history/religion class at Tampa’s Steinbrenner High School. Shibly, director of the Tampa chapter of CAIR, was invited by Kelly R. Miliziano, a teacher in the Social Studies Department at Steinbrenner.
CAIR describes its mission as enhancing understanding of Islam, protecting civil liberties, and empowering American Muslims. But at least five of its former staff members or lay leaders have been arrested or deported on terrorism and weapons-related charges. In the 2009 Holy Land Foundation for Relief and Development re-trial, a co-founder of CAIR’s Texas chapter was sentenced to 65 years in prison for helping funnel more than $12 million to Hamas (the Palestinian Islamic Resistance Movement), a U.S.-designated terrorist organization. CAIR was an unindicted co-conspirator in the case, and federal prosecutors presented evidence that the council’s founders had been members of the Islamic Assocation for Palestine. IAP’s organizers, in turn, included eventual leaders of Hamas and another U.S.-designated terrorist group, Palestinian Islamic Jihad. It repeatedly has attempted to intimidate critics of Islamic radicalism and to deflect scrutiny with allegations of “Islamophobia.” This even after Somali-American Muslims in Minneapolis accused CAIR of attempting to interfere in the FBI’s 2009 investigation of young men being recruited to fight for the Shabab terrorist movement in Somalia.
A CAMERA special report and numerous other CAMERA reports have documented CAIR’s aims and several of its problematic activities.
Shibly, from Buffalo, New York, took over the reins of the CAIR Tampa group in 2011. In mid 2011, Shibly displayed a fake FBI pie chart (see below) on his Web site purporting to show that terrorist acts in America committed by Jews outnumber those committed by Muslims.
Florida Political Press’ Tom Tillison was first (Dec. 6, 2011) in the State of Florida to report on CAIR’s 2011 infiltration into Florida schools:

The Council on American-Islamic Relations of Florida, Tampa chapter (CAIR-Tampa) posted an article on Facebook this past Friday, December 3, stating that it gave seven presentations on Islam last week to over a dozen different AP world history and world religions public high school classes in the Tampa area.

According to the report, which did not name the high schools visited, the presentations covered topics such as basic Muslim beliefs, Islamic history, Islam and human rights, religious tolerance and diversity, and popular misconceptions about Islam.

The major Florida newspapers covering the story (in January) were the Tampa Tribune and the Tampa Bay Times (formerly St. Petersburg Times). The Times provided two similar articles, here and here, favoring the school board/CAIR viewpoint. Otherwise, the only coverage by local major media seems to have been by Tampa’s ABC affiliate, WFTS/TV (Jan. 25).
Other coverage of CAIR’s Tampa-area school activities seems to have been limited to The Investigative Project on Terrorism (IPT) Web site and Pamela Geller of the Atlas Shrugs Web site. Geller asks: “Why is a representative [Hassan Shibly] of a terror-linked organization, a defender of jihad terror groups and an apologist for Islamic supremacism welcome to speak in public schools?” Geller, who apparently broke the story on Dec. 4, 2011 on her site, quoted from the response by the teacher, Miliziano, who had invited Shibly: “[T]he school has scheduled additional religious speakers to balance the CAIR operative – a Hindu priest or a Christian pastor.”

The problem with that is that Shibly is a political speaker. A Hindu priest or Christian pastor won’t counter the poisonous propaganda that Shibly spews to our impressionable young minds. An informed counter-jihad speaker such as Robert Spencer, Nonie Darwish, Wafa Sultan or I myself must be given a chance to speak, so as to counter the lies of Hamas-tied CAIR…Meanwhile, the email exchanges between CAIR and Steinbrenner High School are revealing. Miliziano wrote this in a November 14 email: “Every year I invite a representative from CAIR to speak to our AP [Advanced Placement] World History Students.” After CAIR-Tampa responded favorably, Miliziano wrote again: “Over the years I have had many speakers from CAIR come to my classes, and it has been such a good learning experience for the students.

Shibly now stands at the center of a controversy in Florida, where a coalition of education and conservative organizations has called for the Hillsborough County School District to sever its ties with Shibly and CAIR after years of the group’s representatives being invited to speak at schools in the district… In a Facebook post from Dec. 3, 2011, CAIR bragged that it had given presentations to more than a dozen AP World History and World Religions classes in Tampa public schools.

The coalition, however, has taken issue with the choice of CAIR, and Shibly, as moderate representations of Islam for impressionable students, especial ly without other truly moderate experts being invited to provide other viewpoints. After all, Shibly has a history of defending terrorist groups and espousing some critical views of both the U.S. and Israel. In the aftermath of the 2006 Israel-Lebanon War, Shibly defended Hizballah as a “resistance movement” that provides social services to the Lebanese people.

Response of Floridians
The text of a Jan. 9, 2012 release by United Conservative Groups of Florida is partially reproduced here:

A coalition of Education and Patriotic Organizations are outraged that a federally designated HAMAS entity, the Council on American Islamic Relations (CAIR), has apparently gained regular access to Tampa area public schools students.

According to sources one speaker was Hassan Shibly, CAIR Tampa Chapter Leader. According to CAIR’s Facebook post on December 3rd, 2011, CAIR had conducted presentations to over a dozen different AP world history and world religions classes in Tampa Public Schools to include Steinbrenner High School…

We are assuming that giving CAIR entre’ into the Hillsborough schools was done without knowledge of who CAIR is. We trust you agree that this organization should not have access to our children, furthermore, that we can no longer tolerate the political correctness or ignorance which has allowed this injustice to be perpetrated on our children.

There are in fact Islamic groups which would be a much better choice to speak to our children, one such group is American Islamic Forum for Democracy ( AIFD).

We respectfully request the following actions immediately be taken;

Respectfully submitted by [listed are the names and affiliations of several members of the community, some of whom are prominent].

Regarding such complaints, according to an informed local source, Steinbrenner’s administrators and the school board officials were slow to respond and less than forthcoming while attempting to downplay the CAIR event.

Their work in America is a kind of grand jihad in eliminating and destroying the Western civilization from within and “sabotaging” its miserable house by their hands and the hands of the believers so that it is eliminated and God’s religion is made victorious over all religions…This material was discovered during a 2004 FBI raid in Annandale, Virginia, and subsequently entered into evidence at the 2008 Holy Land Foundation trial, the largest terrorism financing trial in our nation’s history. It was this case that linked the Council on American Islamic Relations (CAIR) to Hamas, and named it along with the Islamic Society of North America (ISNA) and 27 other organizations as un-indicted co-conspirators.

Fake FBI Chart Displayed by CAIR’s Shibly and Others
About half-way down on the first page of Shibly’s Web site, this bogus pie chart appeared for several weeks in 2011 until suddenly deleted:
All Terrorists are Muslims Except the 94% that Aren’t 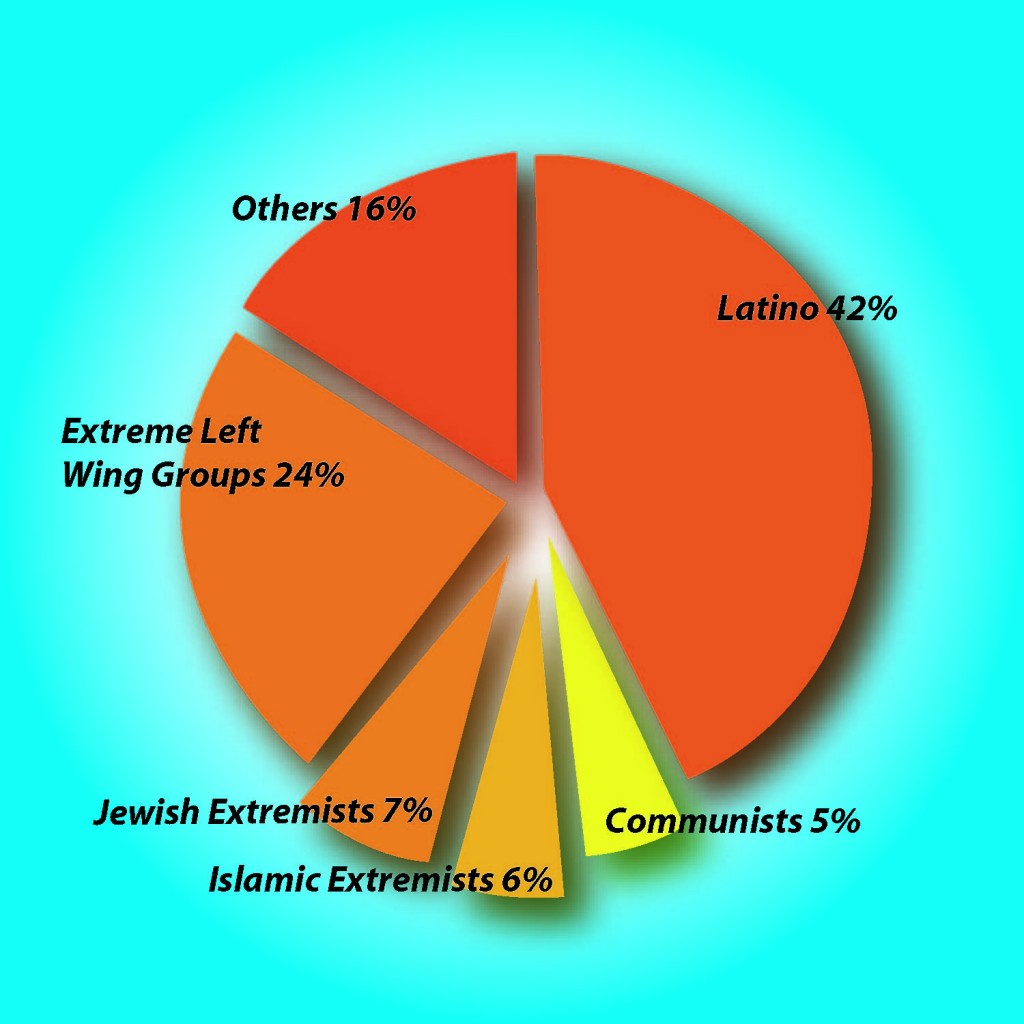 Terrorist Attacks on U.S. Soil by Group, From 1980 to 2005, According to FBI Database
Unwary visitors to Shibly’s Web site were likely to assume erroneously that this pie chart is an FBI-produced chart. The chart, alleging that 6 percent of terror attacks in the United States were perpetrated by Muslims – even less than the 7 percent shown for “terror” attacks perpetrated by Jews – appears to be an apologetic for Islamic terror. An Internet Google/Yahoo search (“All Terrorists are Muslims Except the 94% that Aren’t”) uncovers dozens of Muslim terrorist-apologist, anti-Israel Web sites touting this same bogus chart.
The official FBI Web site does provide a section, “Terrorism 2002-2005,” which includes statistics for terrorism and related tables and charts for 1980-2005 but Shibly’s purported FBI pie chart is not there. However, the chronological summary table at the end of that FBI Web page is probably the inspiration for the creation of the bogus pie chart. (No other FBI Web site sections were found containing that material). The table lists 318 terrorist incidents in America during 1980-2005 with a total of 3,178 killed in these terrorist incidents of which 2,977 (estimated) were killed in the Sept. 11, 2001 attacks on America by Islamic terrorists (mostly Saudi jihadists). Thus, at least 94 percent (2977/3178) of the fatalities in America during 1980-2005 were attributable to Islamic terrorists in the 9/11 attacks. Note that Shibly’s pie chart caption says “All Terrorists are Muslims Except the 94% that Aren’t.”
An analysis of the table shows that of the 318 incidents, the great majority resulted in no fatalities, approximately 20 of the incidents included one death each, 5 of the incidents resulted in two killed each, one had five killed (9/01-11/01 anthrax killings), one resulted in six killed (1993 car bombing by Islamists in New York), one led to 168 people being killed (Timothy McVeigh and Terry Nichols truck bombing of the federal building in Oklahoma City in April 1995). A typical terrorist incident perp etrated by “Jewish terrorists” was the “8/31/1981 New York City, NY Hostile Takeover by Jewish Defense League” (no injuries or deaths).
Content of CAIR Presentation?
Do the CAIR presentations to unwary public school children and teachers include contrived, falsified, or otherwise misleading material? The answer is unknown since the presentation materials have not been released to the public. But based on CAIR’s origins, history and deserved reputation, the answer may well be yes.
Donate Now