“Too many media outlets have abetted the actions of these radical activists by promoting their narrative and glorifying them, while minimizing or ignoring their public promotion of and participation in violence against Israelis. These journalists have played right into the Tamimis’ hands, providing them with the megaphone and publicity they seek to condemn Israel and market themselves as courageous heroes,” CAMERA’s Ricki Hollander wrote, after a video of 16-year-old Palestinian Ahed Tamimi (now 17) slapping and punching Israeli soldiers went viral.

This week, NBC is the latest media outlet to take a page out of that playbook, downplaying Ahed’s calls for violence (“Slap heard ‘round the world: Ahed Tamimi becomes symbol of Palestinian resistance”), and whitewashing the Palestinian struggle as one “against the occupation,” as opposed to against Israel in any borders.

NBC’s F. Brinley Bruton and Lawahez Jabari lionize “the teen with long blond curly hair [who] swiftly became a global symbol of resistance to Israeli occupation,” going on to present her as a courageous maverick who “simply buck[ed] a longstanding stereotype of Palestinian activists – hoary old warriors and rock-throwing young men – and in the process electrifying a Palestinian population disheartened by years of settlement-building on land envisioned as a future state.”

The NBC reporters note that the imprisoned Tamimi faces charges of incitement and assault. But they avoid specifying why she is facing charges of incitement, concealing the message that she delivered which likely “electrified” the Palestinian population as much as her assault against the soldiers.

Narimen, Ahed’s mother, posted on Facebook footage of both the assault and Ahed’s message to the Palestinian public which immediately followed the attack on the soldiers. Ahed urged her fellow Palestinians:

I hope that everyone will take part in the demonstrations as this is the only way to achieve the result. Our strength is in our stones, and I hope that the world will unite to liberate Palestine, because [U.S. President] Trump made his declaration and they need to take responsibility for any response that comes from us, whether it is stabbings or martyrdom operations [suicide bombings] or throwing stones, everyone must do something and we unite in this way in order for our message to be heard that we want to liberate Palestine.

Her call for violence reached Palestinian teenagers like 16-year-olds Sineen Amereh of eastern Jerusalem, who is featured in the article. But while the NBC reporters make sure to conceal Ahed Tamimi’s words that clearly incite to violence, they readily cite Amereh about Tamimi, presenting the latter’s assault in heroic terms: Amereh “has no doubt about Tamimi’s importance to her people’s struggle against the occupation, as well as to the role of girls in that resistance,” writes the NBC reporters, and “her fellow teen’s actions have given her confidence to stand up to injustice.”

In both the text and the accompanying video, NBC deletes Ahed’s call to violence and provides a truncated clip showing only her assault on soldiers. As a result, when the journalists reference Ahed’s message only as potential “charges of incitement,” readers have no way of understanding why such a charge was brought against Ahed or the nature of the above-mentioned “resistance.”

Similarly, the article softens earlier instances of violence carried out by the extend Tamimi clan, “famous for its decades-long resistance to Israeli occupation.” Thus, Bruton and Jabari write:

In 2011, Mustafa Tamimi died after a tear-gas canister hit him in the face at close range as he threw rocks at soldiers. In 2010, Rushdi Tamimi was shot dead by Israeli soldier [sic] while he was throwing stones. Tamimi’s cousin Ahlam Tamimi was imprisoned for her involvement in a 2001 suicide bombing of a Jerusalem pizza restaurant that killed 15 and wounded more than 120.

While the NBC journalists spell out that Mustafa and Rushdi targeted soldiers, they skip over whom exactly was targeted and murdered in the pizzeria bombing for which Ahlam was responsible: the victims include eight children Ahed’s age or younger, a pregnant mother, a 62-year-old woman, and five members of the Schijveschuurder family, including the parents and three of their children. Does this kind of deadly attack, targeting young children, mothers and senior citizens, qualify as “resistance to Israeli occupation”?

(NBC also ignores Ahed’s relative, Nizar Tamimi, who took part in the 1993 murder and burning of Haim Mizrachi, a 30-year-old who never returned from his outing to buy eggs. Was Nizar, too, engaging in “resistance to Israeli occupation”?)

Indeed, at a Brussels panel last September, where she appeared alongside notorious PFLP hijacker Leila Khaled, Ahed Tamimi reportedly stated: “The world must recognize the Palestinian cause. The occupation is not only the theft of land. We oppose racism, Zionism, the entire system of occupation and not only the settlements.” In other words, Tamimi should not be seen as a symbol against Israeli settlements, but against Israel in any borders.

Bruton and Jabari cite Defense for Children International Palestine, as if it were a legitimate NGO as opposed to a group with multiple ties to the PFLP terror group. As noted by NGO Monitor, DCI Palestine has praised Manal Tamimi, Ahed’s relative, as a “prominent human rights defender.” Manal is not shy about her feelings towards Jews, raising a classic anti-Semitic blood libel that accuses them of observing Yom Kippur by drinking Palestinian blood. As researcher Petra Marquardt-Bigman documented in great detail, such Jew-hating rhetoric is common fare for the Tamimi clan, ever active on social media. Unsurprisingly, the article conceals Tamimis’ advocacy for terrorism, dismissing it as just another Israeli accusation. 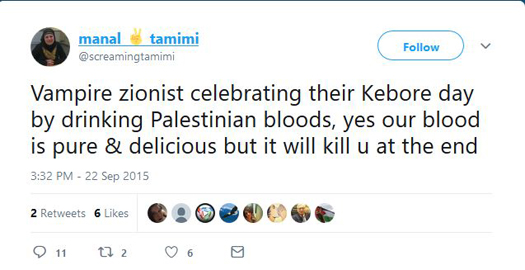 Instead it cites Amnesty International, an NGO known for its anti-Israel bias and dishonesty to present Ahed’s father, Bassem Tamimi as a “prisoner of conscience.”

Bassem is misrepresented as a victim of Israel, “exhausted by the constant media requests” as if this is something undesirable to Bassem. Concealed is Bassem and the Tamimi clan’s anti-Israel propaganda campaign, which includes running a ‘news agency’ called ‘Tamimi Press’ that films and disseminates images and clips of the weekly riots organized by him in Nabi Selah, as well as the fact that Bassem’s activities have included indoctrinating 3rd graders in the U.S.to join Palestinian “freedom fighters.”

With this article, NBC joins several other irresponsible media outlets that have played straight into the Tamimis’ hands. As Ricki Hollander indicated, they follow a template  that  includes presenting Ahed as a glamorous heroine against a powerful military, minimizing Palestinian violence in general, and Ahed’s and the Tamimis’ in particular, devoting plenty of space to directly quoting or paraphrasing the Tamimis and their supporters and presenting them as a family of determined and reasonable activists trying to resist Israeli occupation, and as victims of harsh punitive measures by Israel.

This template represents shoddy, partisan and manipulative journalism at its worst as it promotes the Tamimis’ narrative and deprives news consumers of the facts necessary to understand the full story.