In response to CAMERA’s communication with NBC officials, Ayman Mohyeldin, anchor of “MSNBC Live with Ayman Mohyeldin,” has clarified his misleading Sept. 19 tweet, which had stated: “Ruth Bader Ginsburg didn’t just talk about justice and equality. She personified these principles. In 1999 Justice Ginsburg married Hassan Jabareen & Rina Rosenberg in her Supreme Court chamber. The couple couldnt marry in Israel because interfaith civil marriage is not allowed.” (Emphasis added.) 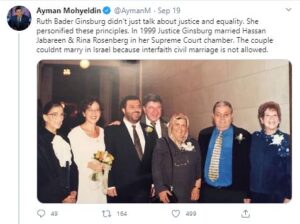 As the US Embassy in Israel advises American citizens: “Israeli law does not permit civil marriages.  According to Israeli law, only religious leaders may perform marriage ceremonies . . . “
Likewise, the New Family NGO explains: “In the absence of separation of religion and state, civil marriages are not conducted in Israel.”
Mohyeldin’s tweet prompted many on Twitter to point out the fact the prohibition of civil marriage in Israel extends across the board, and does not uniquely apply to interfaith unions, contrary to the journalist’s suggestion.
CAMERA wrote to senior officials at NBC, who commendably responded:

While he certainly did not intend to mislead, agreed it could have been more clear and to that end, Ayman has posted a clarification in the context of a twitter thread discussing Justice Ginsburg’s officiating at the marriage of Hassan Jabareen and Rina Rosenberg.

Mohyeldin’s clarifying tweet accurately states: “This is why interfaith couples like Hassan and Rina asked Justice Ginsburg to marry them. There are no civil marriages in Israel and religious authorities don’t marry couples from different faiths.”