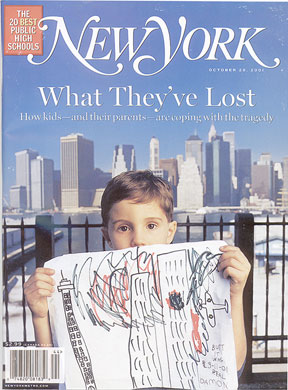 New York Magazine’s October 29th cover photo features a six-year-old boy holding up his drawing of the World Trade Center on fire and about to be hit by what appears to be an Israeli plane (as indicated by the Stars of David on its wings).

A spokesperson for New York Magazine stated that the boy did not intend to blame Israel, and that editors for the story on how kids and parents are coping with the attacks did not notice the stars on the plane’s wings until it was pointed out by readers.

One curious coincidence is that the photos for the story were taken by a photographer named Nigel Parry. Now, there is a Nigel Parry who is an extreme anti-Israel activist who formerly worked at Birzeit University near Ramallah, and is now a leading contributor to the pro-Palestinian website known as Electronic Intifadah. That Nigel Parry is also a photographer, as testified to by his website nigelparry.com.

But this was a different Nigel Parry, who is a full time professional photographer represented by the agency Creative Photographers Inc (CPI).

New York Magazine has indicated that an acknowledgment of the inappropriate cover will be printed in the next issue.