The New York Times public editor today admitted it was a mistake to feature, at the top of a story about a 19-year-old Israeli soldier murdered in his sleep, a photograph of the Palestinian killer’s mother. But even as Margaret Sullivan, the public editor, was discussing the problematic photo choice, about which CAMERA had lodged a complaint last week with the foreign desk, a front page story in in The Times provided another example of her newspaper’s bad judgment. 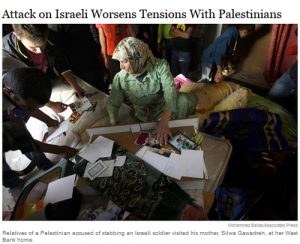 Sullivan’s acknowledgment that that its photo was the “wrong” choice for the article is a start. But it is hard to get very excited about an admission that only addresses a narrow part of the larger problem: the incessant stream of poor decisions coming from the paper.
A Pattern Continues

We have recently noted, for example, that reporter Jodi Rudoren injected her unfavorable opinion into a news story when she insisted Israeli prime minister Benjamin Netanyahu is “best known for, and perhaps best at,” speaking stridently. We have highlighted the newspaper’s rapid-fire use of hostile adjectives — “shrill,” “stubborn,” “cynical,” “strident,” “abrasive,” and “derisive” — in reference to Israeli leaders. And we have shown that The Times tends to be much softer on Palestinians, describing Hamas’s extreme anti-Jewish and anti-Israel rhetoric as merely “questionable.”

And yet again, in today’s front page story by Jodi Rudoren and David Sanger, the newspaper is much harsher on Israelis than it is on Hamas, the terrorist group governing the Gaza Strip. In an article about differing American and Israeli views on a potential deal with Iran, the reporters accuse Israel’s minister of strategic affairs of having “distorted” the contours of the proposal:

[I]n some cases, Israeli officials appear to have distorted what Iran would get in return.

At a briefing with international journalists on Wednesday, Yuval Steinitz, Israel’s minister of strategic affairs, said the deal would directly erase $15 billion to $20 billion of what he estimated was the $100 billion the current sanctions are costing Iran annually, and lead to relief of up to $40 billion because of indirect effects. The State Department immediately debunked those numbers, noting the sanctions relief would be for only six months, not a year. And the Americans put the figure at under $10 billion. But Israeli leaders have continued to cite the higher estimates.

Compare this charge of “distortion” with the way The Times described false statements in Hamas textbooks in a report two weeks earlier. Rudoren and a coauthor used the gentle word “questionable” to describe the textbook’s claim that “Jews and the Zionist movement are not related to Israel, because the sons of Israel are a nation which had been annihilated.” And according to The Times, the textbooks merely “exaggerate” when claiming that Palestinian missiles struck Tel Aviv during fighting last year, and that the attacks sent “three million Zionists underground for eight days.”

So yes, the photo was bad, and the acknowledgement was a step in the right direction. But day in and day out, Times reporters treat their readers to such lopsided and unfair writing. The Israeli leader is “hard-line,” “strident,” “shrill” or “stubborn” and the Palestinian leader is “conciliatory.” Israelis distort, Palestinians just exaggerate.
$20 Billion in Relief — “Distortion” or Extrapolation?
Worse yet, it seems Steintiz’s “distortion” about sanctions relief was not a distortion at all, nor even an exaggeration. Judging by a Reuters report, the Israeli minister’s assertion that a deal with Iran could erase up to $20 billion in sanctions was consistent with the American assessment. The only difference was that he was assuming the sanctions relief would continue past expiration of the initial six-month agreement, while the Americans were making no assumptions about what might happen during the next six months.
According to the Reuters report, Steinitz was describing the yearly impact of sanctions on Iran’s economy before noting that “of this amount” — in other words, of this yearly loss — $20 billion would be relieved:

“The sanctions relief directly will reduce between 15 to 20 billion dollars out of this amount,” Steinitz said on Wednesday at an English-language event hosted by the Jerusalem Press Club.

If Steinitz believes that the sanctions relief will continue past the six-month time frame (not an unreasonable expectation) and if he was referring to its impact over the course of a full year (as he seemed to be doing), his assessment of $20 billion in relief over a year was nearly perfectly in line with American estimates of $10 billion in relief over six-months. So if the Reuters report was accurate, Steinitz was certainly not “distorting.” He was merely making an assumption that the Americans did not make, but did not rule out either.

In other words, The New York Times was apparently wrong about Steinitz, just as it has been wrong in reserving for Israel its harsh editorializing in news stories, and just as it was wrong in selecting a photo of the mother of a Palestinian murderer on a day when Israel was mourning the killer’s young victim. To get back on track, the newspaper must do more than admit to a bad photo decision. It has to look at the bigger picture, acknowledge its biases, and make serious changes.