One landmark moment [reflecting top-down decision making] came in September 2020 when the emirates announced they would normalize relations with Israel, a step that most other Arab countries — and all other Gulf States — have opposed, or at least been reluctant to take. 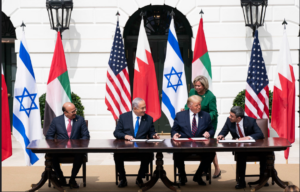 It is absolutely false that all other Gulf States opposed or were at least reluctant to normalize with Israel. In particular, Bahrain, a second Gulf State, also normalized with Israel shortly after UAE’s step. (See “Bahrain Will Normalize Relations With Israel, in Deal Brokered by Trump,” Sept. 11, 2020, Michael Crowley and David Halbfinger).
Saudi Arabia, another Gulf state, responded optimistically to UAE’s announcement. As Associated Press reported (“Saudi Arabia cautiously welcomes UAE, Israel normalization“):

Similarly, Oman, yet another Gulf country, also spoke out in favor of the deal. AFP reported Aug. 14 (“Oman says back normalisation of ties between UAE and Israel”):

Oman said Friday it backed the normalisation of ties between the neighbouring United Arab Emirates and Israel, and hoped the move would help achieve a lasting Middle East peace.

A foreign ministry spokesman expressed the sultanate’s “support for the UAE’s decision regarding relations with Israel” according to a statement on Oman‘s official news agency.

Nor is it true that most other Arab countries opposed the Abraham Accords. In fact, the opposite is true. A Palestinian effort to extract an Arab League condemnation of the normalization failed; most Arab nations refused to condemn the normalization.
In addition, the Emirates announced its plans to normalize with Israel in August 2020, not September, as reported. (See, for example, “Israel and United Arab Emirates Strike Major Diplomatic Agreement,” Aug. 13, 2020, Peter Baker, Isabel Kershner, David Kirkpatrick and Ronen Bergman.)
Given the historic significance of Bahrain’s normalization, it’s startling that Cairo-based correspondent El-Naggar along with her editors missed the major event.

In response to communication from CAMERA’s Israel office, The Times yesterday published the following correction in print on page A17:

An article on Wednesday about a change in the workweek in the United Arab Emirates referred incorrectly to the normalization of ties between Arab countries and Israel. Both Bahrain and U.A.E did so last year; it is not the case that U.A.E. was the only Persian Gulf state to do so.

A similar correction was appended to the bottom of the online article Dec. 10. In addition, the amended worth within the digital article now states:

One landmark moment came in September 2020 when the emirates and Bahrain became the first Gulf States to agree to normalize relations with Israel, a step that most Arab countries had opposed or been reluctant to take.