An 8,000-word New York Times magazine cover story by Ben Ehrenreich, described by Ha’aretz’s Chemi Shalev as “pro-Palestinian,” embodies much that is wrong with the Times coverage of Israel and the Palestinians.

“Indicting Israel,” a CAMERA monograph analyzing New York Times coverage of the Palestinian-Israeli conflict, found “disproportionate, continuous embedded indictment of Israel that dominates both news and commentary sections. Israeli views are downplayed while Palestinian perspectives, especially criticism of Israel, are amplified and even promoted. The net effect is an overarching message, woven into the fabric of the coverage, of Israeli fault and responsibility for the conflict.”

While the CAMERA study provides quantitative documentation of The Times‘ systematic bias, the Ehrenreich piece gives a dramatic anecdotal illustration of the endemic bias. Shalev notes the “timing of the article [just before Obama’s upcoming visit], its prominent placement, its provocative headline and its undeniable one-sidedness.” He further observes of the article that “some may interpret [it] as encouraging a third intifada.”

There are many things wrong with the article, but one of the most notable is that, close to the end if the reader gets that far, the writer flatly states, “In mid-November, Israeli rockets began falling on Gaza.” Of course, the truth is very different. After years of incessant rocket attacks from Gaza, Israel finally undertook some action. The actual timeline of events can be found here.

The story is entitled “Is This Where the Third Intifada Will Start?” With all the cheerleading in the story, it seems the New York Times hopes so. 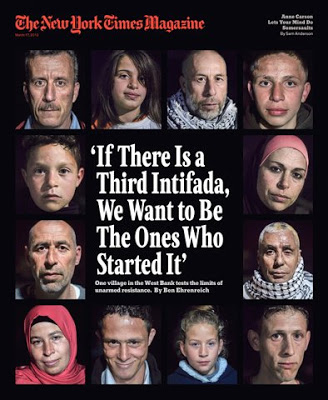 The New York Times Magazine cover reads: “If there is a third Intifada, we want to be the ones who started it: One village in the West Bank tests the limits of unarmed resistance.”
Testing the Limits of “Unarmed Resistance”?

CAMERA has long decried The Times‘ habit of downplaying the violence of Palestinian protests:

In the pages of The New York Times, Tom Friedman recommended that West Bank Arabs engage in rock-throwing as part of “nonviolent opposition”. Nick Kristof described how Palestinians are taking up “nonviolent peaceful resistance” of the type “inspired by the work of Mahatma Gandhi and the Rev. Dr. Martin Luther King Jr.” though, he reported, they sometimes define “nonviolence to include stone-throwing.”

In the Ehrenreich piece Gandhi is again referenced, “If the loincloth functioned as the sign of Gandhi’s resistance, of India’s nakedness in front of British colonial might, Bassem said, ‘Our sign is the stone.’” Throwing stones is portrayed as an insignificant threat. Describing the weekly protests, Ehrenreich writes:

The basic structure, though, varied little week to week: a few minutes of marching, tear gas fired, then hours of the village youth — the shebab, they’re called — throwing stones while dodging tear-gas canisters and rubber-coated bullets until the sun set and everyone went home.
[…]
The shebab put a great deal of thought into tactics, trying to flank and surprise the soldiers. But even when their plans were perfectly executed, they could not do much more than irritate their enemies.

Actually, stone throwers do much more than “irritate their enemies.” Currently, an Israeli toddler remains in critical condition after the car she was riding in collided with a truck swerving from its lane to avoid stones being thrown by Palestinians. In January, an Israeli child was injured when Palestinian Arabs heaved a rock through the windshield of the car he was riding in. In In 2011, Asher Palmer and his infant son Yonatan were killed when their car overturned after being pelted with boulders. The fact is, rocks can, and do, kill. According to a spokesman for the IDF, hundreds of Israeli soldiers have been injured in rock-throwing incidents in the last two years.

I asked one of the boys why he threw stones, knowing how futile it was. “I want to help my country and my village, and I can’t,” he said. “I can just throw stones.”

In truth, there may be other reasons as well. Ynet reported that “A senior IDF source told Ynet that intelligence indicates that pro-Palestinian activists pay Palestinian children from Nabi Salih and the nearby villages to confront the soldiers.”

Nature of the Protests

While Ehrenreich celebrates a famous incident where A’hd Tamimi confronted IDF servicemen, describing “the tiny, bare-armed blond girl facing down a soldier,” he never describes how the children are cynically used to attract media attention. CAMERA Israel Office Director Tamar Sternthal wrote an Op-Ed in the Times of Israel:

Rather than keeping their children at a safe distance from the often-violent clashes, the parents encouraged their children to play highly visible roles in the confrontation with the army.

T
he Times Magazine article asserts that the protesters do not have the support of the Palestinian Authority:

At times the Palestinian Authority acts as a more immediate obstacle to resistance. Shortly after the protests began in Nabi Saleh, Bassem was contacted by P.A. security officials. The demonstrations were O.K., he said they told him, as long as they didn’t cross into areas in which the P.A. has jurisdiction — as long, that is, as they did not force the P.A. to take a side, to either directly challenge the Israelis or repress their own people. (A spokesman for the Palestinian security forces, Gen. Adnan Damiri, denied this and said that the Palestinian Authority fully supports all peaceful demonstrations.)

In this case, the PA actually does support the demonstrations. The very incident described involving A’hd Tamimi earned her an award from PA President Mahmoud Abbas.
In fact, the PA has long incited violence against Israelis, including “the day of rage” and the waves of terrorist attacks known as the first and second intifadas. Of course, the PA does not encourage Palestinian Arabs to protest against the PA itself. These protests can be violently suppressed, not that you’d ever learn about that from reading The New York Times, which only covers —and seemingly supports and encourages— Palestinian protests against Israelis.
“The Occupation”

Ehrenreich describes the heavy burden of the occupation for Palestinian Arabs, writing “The checkpoints, the raids, the permit system, add up to more daily humiliation than Palestinians have ever faced.”

Yet, as “Myths and Facts” reports:

Barriers are not set up to humiliate Palestinians, but to ensure the safety of Israeli citizens. Frequently, when Israel has relaxed its policy and withdrawn checkpoints, Palestinian terrorists have taken advantage of the opportunity to launch new attacks on innocent Israelis. Still, Israel has dismantled more than 120 unmanned checkpoints and reduced the number of manned checkpoints from 41 to 14 in the last two years.

Even the United Nations confirmed that Israel has dismantled 20 percent of West Bank checkpoints.

While Ehrenreich asserts that, “In late November, [Israeli Prime Minister] Netanyahu announced plans to build 3,400 settlement units in an area known as E1, effectively cutting off Jerusalem from the West Bank,” The New York Times already clarified that the planned construction “would not completely separate [West Bank] cities from Jerusalem.”

Unfortunately, terrorists have used every Israeli attempt to ease restrictions on Palestinian daily life as an opportunity to renew their attacks on Israeli citizens.
[…]
It must be stressed that the purpose of the security precautions is not to unduly burden the Palestinian population, but rather to ensure the security of Israeli citizens facing daily threats to their very lives. The end to these restrictions, like peace itself, is dependent on an end to the violence and terrorism.

And while the article lavishes 8,000 words on the Palestinian Arabs of the West Bank, there is no mention at all of the fact that their leadership refuses to even try to negotiate a peace agreement with the Israeli government. Israel has agreed to, and United States policy demands, negotiations without preconditions. As of yet, PA leadership has refused.

The very first declaration in the newspaper’s code of ethics states, “The goal of The New York Times is to cover the news as impartially as possible.” This article clearly falls short of that goal. It is unmistakably partial to the Palestinian Arab narrative.

Barbaric acts of terrorism targeting civilians are equated with the legitimate rights of a democratic nation state to defend its citizens from those attacks:

Though everyone I spoke with in the village appeared keenly aware of the corrosive effects of violence — “This will kill the children,” Manal said, “to think about hatred and revenge” — they resented being asked to forswear bloodshed when it was so routinely visited upon them.

Worse still, the entire story seeks to romanticize the Palestinian protesters as endearing, sympathetic victims. Not one of the 8,000 words is used to even name, let alone humanize, any of their victims.

For example, the article relates:

In 1993, Bassem told me, his cousin Said Tamimi killed a settler near Ramallah. Eight years later, another villager, Ahlam Tamimi escorted a bomber to a Sbarro pizzeria in Jerusalem. Fifteen people were killed, eight of them minors. Ahlam, who now lives in exile in Jordan, and Said, who is in prison in Israel, remain much-loved in Nabi Saleh.

One of the minors killed was Malka Chana Roth, 15, a daughter, sister and friend. Her family describes her as “caring, sweet-natured, talented, vivacious, musical and deeply devoted to doing everything in her power to help children with disabilities, Malki, as she was known to everyone, brought happiness into many lives.”

CAMERA has reported on The Times‘ tendenc
y to humanize the perpetrators of Palestinian terrorism and to virtually ignore their Israeli victims. This article is certainly not the first instance. In a blog post, Malki’s father Arnold Roth astutely evaluates Ehrenreich, Times editors and the activists who seem to view those who support and initiate terror and murder as heroes:

We wonder how often public opinion about the complex lives and unwanted war in which we and our neighbours live is formed by people who don’t speak the local languages, and don’t know much of its history or geography. Lacking the ability and sometimes the will to actually delve, they are left to read romanticized narratives, signs painted onto walls, political analysis crafted by full-time practitioners of public relations, staged photographs and other tendentious imagery.

The result is a kind of entrancement: messy, nasty complexity reduced down to simple pill form. Swallow this, and join us.

While Sunday’s New York Times Magazine cover story sought to put a sympathetic face on those who commit and condone violence, we leave you with the real face of one of their victims, Malki Roth.