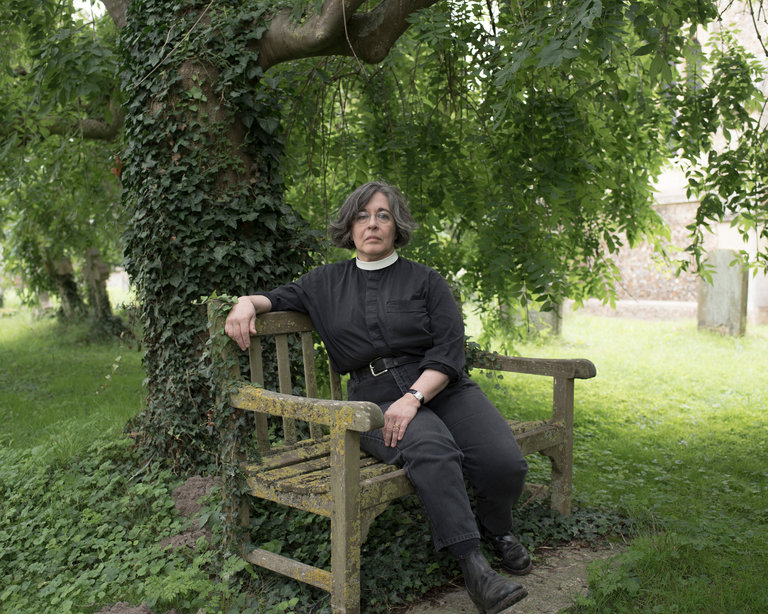 “But I don’t want to go among mad people,” Alice remarked.
“Oh, you can’t help that,” said the Cat: “we’re all mad here. I’m mad. You’re mad.”
“How do you know I’m mad?” said Alice.
“You must be,” said the Cat, “or you wouldn’t have come here.”
(from an Alice Goodman childhood favorite, Lewis Carroll’s Alice’s Adventures in Wonderland)

The Aug. 23, 2017 Times arts section of the newspaper featured a reverential description (“The Words of Opera’s Nixon”) of opera librettist Alice Goodman, who had turned her back on her American Jewish ancestral roots by converting (during her writing of a 1991 anti-Israel opera) to Anglican Church Christianity, the mother church of which is known for its hostility toward Israel. Goodman is now a parish priest in England.

Now 59, she [Goodman] serves around 6,000 people in a group of parishes in Cambridgeshire, driving a battered car festooned with flinty, expletive-strewn bumper stickers with mottos like “Doing my part to piss off the religious right.”

Goodman’s proclivity for profanity had been demonstrated by use of the F-word in her “Nixon in China” (first performed in October 1987) opera libretto.

The article mentions in glowing terms the partnership of Goodman with opera composer John Adams in “The Death of Klinghoffer” and the Nixon opera. Mention is also made of Peter Sellars’ collaboration as librettist with Adams in “Doctor Atomic.”

In 1991, the “Nixon” team created “The Death of Klinghoffer,” which addressed the real-life hijacking of a cruise ship by Palestinian terrorists and their murder of a Jewish-American passenger in a wheelchair. Much of the action is stylized, but the opera has been dogged since its premiere by accusations that it is problematic, and even anti-Semitic, in its attempt to depict the deep historical roots of the terrorists’ anger.

“Anything I might say about the controversy would pour gasoline on the embers,” Ms. Goodman said, adding, “I doubt I’ll ever write anything better than the libretto of ‘The Death of Klinghoffer.’”

However, Times readers should have been informed that both Adams/Goodman operas exhibit an obsession with what they imagine to be Jewish guilt. In the Nixon opera, the only villain is Henry Kissinger, former Secretary of State, portrayed as cruel and cunning. In the Adams/Sellars “Doctor Atomic,” real-life physicist J. Robert Oppenheimer (known as the “father of the atomic bomb”), the opera’s central character, is portrayed as tortured by feelings of guilt about the atom bomb. But the most egregious example of the obsession is demonstrated in the controversial anti-Israel Klinghoffer opera.

So important, presumably, was the need to pursue a political agenda related to their obsession, that Adams and Goodman gave up the opportunity to have a catchy (and accurate) title, “The Killing of Klinghoffer.” Instead, they used “Death” rather than “Killing” thereby falsely suggesting a sort of happenstance death.

That opera repeatedly defames Israelis and Jews as a group. But nowhere does it criticize Arabs or Muslims as a group.

The opera’s plot is based on the 1985 murder of a 69-year-old disabled American Jew, Leon Klinghoffer, a passenger, with his wife Marilyn, celebrating their 36th wedding anniversary, on the Achille Lauro Italian cruise ship. Klinghoffer was shot in the head by Palestinian Arab terrorists and they dumped the body and wheelchair into the Mediterranean Sea.

The opera’s story line can be characterized fairly as “Understandably aggrieved Palestinian Arabs wreak vengeance on Jew standing in for all his perfidious co-religionists.” This is the opera’s obscene inversion of the reality that was a cruise ship hijacking and subsequent murder of an American Jew by Arab terrorists.

The words of the opera’s opening choruses set the tone for the opera. The opera begins with the “Chorus of Exiled Palestinians.” The words describe the Palestinian Arabs as righteously angry, helpless victims of the Jews who steal their land and wreak death and destruction upon them (entirely a false propagandistic characterization). They declare that ultimately their faith (Islamic) will help them to punish and defeat the Jews.

My father’s house was razed
In nineteen forty-eight
When the Israelis passed
Over our street[…]Israel Laid all to waste[…]Let the supplanter look
Upon his work. Our faith
Will take the stones he broke
And break his teeth.

On the other hand, the Chorus of Exiled Jews derogates Israeli Jews, ascribing to them a sense of guilt and a dark pathology merging sexual lust with lust for the land:

When I paid off the taxi, I had no money left,
And, of course, no luggage. My empty hands shall
Signify this passion, which itself remembers.
O Daughter of Zion, when you lay upon my breast
I was like a soldier who lies beneath the earth
Of his homeland, resolved.
You said, “I am an old woman. I thought you were dead.
I have forgotten how often we betrayed one another.[…]Let us, when our lust is exhausted for the day …R>[…]Your neighbour, the one who let me in,
She was brought up on stories of our love.

Elsewhere in the opera, “Wherever poor men — Are gathered they can — Find Jews getting fat” is another example of the opera’s baleful characterizations of Jews. Other such examples can be found in the complete libretto. The opera’s supporters typically stress and praise the opera’s music. But in fact, arguably the music is generally unremarkable except for the clever way it’s used by Adams to underscore words of the Palestinian hijackers. This was pointed out by the eminent American musicologist Richard Taruskin in a New York Times article condemning the Adams opera, “Music’s Dangers And The Case For Control” (Dec. 9, 2001). The New York Classical Review said the opera “makes a devastating impact … [although] there are stretches of mediocre and even outright bad music.”

Why all this matters
Typically ignored by the opera’s apologists led by New York Times is the crux of the problem — the actual incendiary wording sung in Klinghoffer. Instead, the apologists tend to resort to a high-minded sounding defense of artistic freedom while either affirming or rationalizing away the propagandistic storyline.
But just as freedom of speech is not a legally acceptable defense for incitement to either violence or panic, artistic freedom is not a morally acceptable defense for potentially harmful lies and demonization contained in propagandized works by “artists” like Alice Goodman.
Donate Now