The New York Times isn’t directly praising Hezbollah’s “inclusivity” and Iran’s “respect for other cultures.” But the newspaper, in a Dec. 25 story about Christmas in Lebanon, does relay such ideas without the counterweight of journalistic skepticism, resulting in a skewed, sugar-coated account of the role Hezbollah and Iran play in Lebanon.

According to Times reporters Vivian Yee and Hwaida Saad, who attended and reported on speeches and musical performances organized by Iran,

Even Hezbollah, the Shiite political movement and militia that the United States has branded a terrorist organization, has helped ring in the season.

In previous years, it imported a Santa to Beirut’s southern suburbs to distribute gifts. On Saturday, Hezbollah representatives were on hand for the Iranian Christmas concert, an event also featuring handicrafts by Iranian artists, but the organization skipped Santa this year because of financial constraints.

These demonstrations of Christmas spirit seem intended, analysts said, to demonstrate Hezbollah’s inclusivity as a major political and military force in Lebanese society and to highlight its political alliances with Christian parties.

Later in the piece, the authors evoke pluralism when quoting a journalist for Iran’s state television:

“We follow Imam Ali, who told us to respect other cultures,” said Ahmad Tarjoman, 48, a Beirut-based correspondent for Iranian state television who attended Saturday’s Christmas concert with his wife and his daughter, Tasnim, 5, who wore a pair of small reindeer antlers.

The image of a 5-year-old with reindeer antlers serves as a touching visual to go along with the references to respect and inclusivity, which make Iran and Hezbollah seem like benevolent forces in Lebanon, and might seem to discredit the U.S. “branding,” per the article, of Hezbollah as a terror organization.

Less warm and fuzzy, though, is the actual role played by Iran’s state media. According to the Associated Press, the country’s state-backed broadcasters are engaged in an “information offensive,” and have “churned out a blitz of policy statements, negotiating points and news breaks as the main soapboxes for Iran’s public diplomacy.” In other words, Iranian state media, including the Islamic Republic of Iranian Broadcasting (IRIB) division, is a propaganda arm of the regressive, authoritarian regime led by Ayatollah Ali Khamenei. IRIB’s English language broadcaster Press TV, in fact, goes well beyond pro-Iranian policy statements and into rank anti-Semitism (for example by offering “analysis” on Jewish control by former KKK grand wizard David Duke), as documented by the ADL and others. So much for respecting other cultures.

And Hezbollah, that purported demonstrator of inclusivity, makes Press TV look like Ghandi. The terror organization — Hezbollah is viewed as a terrorist group not only by the U.S., but also, in its entirety or partially, by Australia, Canada, the European Union, United Kingdom, Israel, Japan, New Zealand, and even parts of the Arab world — is believed to be responsible for the bombing of a Jewish community center in Buenos Aires, which killed 85 people. The organization’s leader, Hassan Nasrallah, has insisted Israel exists only because “Allah the Glorified and Most High wants to save you from having to go to the ends of the world” to do battle against “the Jews.”

Not only do the New York Times reporters withhold skepticism about purported inclusivity and cross-cultural respect, but they fail to engage with the most basic context about the destabilizing role played in Lebanon by Iran and its well-armed creation, Hezbollah. Indeed, it is striking that a New York Times piece about activities in Lebanon by the Iranian cultural attaché would say nothing about widespread concerns that Iran is, in the words of Lebanese journalist Ali al-Amin, “turning Lebanon into … an Iranian base” for carrying out “military missions” in neighboring countries.

And it is astonishing that a story citing Hezbollah’s political and military “inclusivity” would exclude details about Hezbollah’s violent rejection of those who cross the group. Hezbollah activists, for example, are suspected of severely beating al-Amit, the journalist who criticized their group, when he ran against Hezbollah candidates in last year’s Lebanese elections. This was consistent with a long history Hezbollah’s political violence against Lebanese citizens. 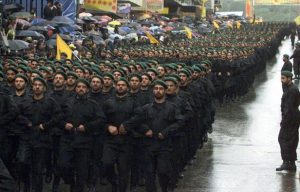 Members of Hezbollah’s parallel army, which is funded by Iran and doesn’t answer to state authority, march in Lebanon.

Hezbollah, though, doesn’t limit itself to beatings and the intimidation of minor political candidates. The party dominates swaths of Lebanon with a parallel, non-state army that isn’t answerable to Lebanon’s leaders or voters. A United Nations tribunal has indicted Hezbollah officials in no less than the assassination Rafic Hariri, a former prime minister of Lebanon. A state investigator who zeroed in on evidence linking Hezbollah to the car bombing that killed Hariri and dozens of others, and who helped the U.N. understand the evidence, was himself killed in a subsequent car bombing. Is this really irrelevant to Hezbollah’s display of peace on earth and goodwill to all men?

New York Times journalists should surely understand that the the destabilizing role played by Hezbollah and Iran are, in fact, directly related to, and even the reason for, their public relations activities in Lebanon. Iranian programming aimed at a Lebanese-Christians is inseparable from its meddling in Lebanese affairs, which itself is inseparable from the Islamic Republic’s military ambitions in the Middle East.

The same goes for Hezbollah. When the France 24 wrote of Hezbollah’s Christmas programming back in 2013 — their “demonstrations of Christmas spirit,” as the New York Times enthusiastically put it, is hardly new — the French outlet’s reporters, unlike those responsible for the Times article, at least managed to find a skeptic of the Christmas outreach. Journalist Ali Hamade told France 24 that Hezbollah is engaged in a “PR campaign” meant to support its power grabs domestically and legitimize its military activities in Syria, where it backed Syrian president Bashar al-Assad’s brutal war targeting both civilians and Sunni terror groups:

Hezbollah wants to be seen as a moderate party that opposes radical Sunni groups like the Al-Nusra Front and the Islamic State of Iraq and the Levant.

I am actually surprised that this PR campaign came about so late. Through this positioning, Hezbollah is trying to legitimise its military engagement in Syria alongside Bashar al-Assad’s regime, by endowing it with a noble cause.

On the domestic front, we must remember that the president’s term will be ending soon, in May. Through this rebranding campaign, Hezbollah is trying to gain the support of undecided Christians. But this image of a moderate party and trusted interlocutor for the Christian community is being acquired through manipulation.

This approach echoes Iran’s new communication strategy since the election of President Hassan Rohani. The Iranian authorities are trying to play the “alliance with regional minorities” card, knowing perfectly well that this will please western audiences.

It’s no surprise that Hezbollah, as a political force and a terror organization, would place high value on such propaganda. In the words of Colin Clarke, a political scientist with the RAND Corporation and an associate fellow at the International Centre for Counter Terrorism-The Hague, “Hezbollah maintains a unit solely dedicated to psychological warfare that specializes in burnishing Hezbollah’s public image,” including by advertising benign activities like “summer camps for children and a robust public works program.” The point, Clarke continued, is to keeps its political legitimacy while “pursuing a militant agenda.”

By reporting so sympathetically on Hezbollah and Iran’s activities, zooming in on “twinkling Christmas trees,” “twinkly lights,” and “inclusivity” while glossing over the ugly side of those actors and their propaganda campaigns, the New York Times fails to provide the quality, in-depth reporting readers demand. Worse, its coverage inadvertently takes part in the very propaganda campaign that the paper should be exposing with clear eyes and unflinching scrutiny.