With Israeli plans to apply sovereignty in parts of the West Bank in deep freeze since September, National Public Radio’s Dec. 8 broadcast relies on a flimsy pretext to level the baseless apartheid smear at the Jewish state, falsely claiming that the plan prompted an Israeli “debate” about whether West Bank Palestinians live under apartheid (“Do Palestinians in Israel-Occupied West Bank Live Under Apartheid?”).

Do Palestinians in the Israeli-occupied West Bank live under apartheid? That word is taboo in Israel, but Israelis confronted that question when Prime Minister Benjamin Netanyahu promised to annex parts of the territory this summer. NPR’s Daniel Estrin reports on the debate.

Only half-way through the story does Estrin even acknowledge: “Israel has now shelved annexation plans,” and then immediately hastens to recapture relevancy: “but [Israel] has not ruled it out for the future.”

Israel has occupied the West Bank for 53 years, and Palestinians there don’t have the privileges and rights that their Israeli neighbors have in settlements guarded by the military. Most Israelis says it’s wrong to compare this to apartheid, defined by international conventions as one racial group dominating another. But I drove through the West Bank with out Israeli who’s changed his mind. 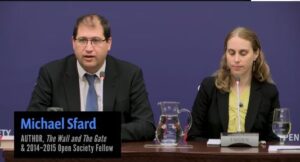 Sfard then opines, “You see we have here a great view of the apartheid,” citing “This the road for Jews” [sic]. While the suggestion that Sfard is a recent convert to the apartheid smear serves NPR’s need for a current news hook, it’s completely misleading. In a 2018 interview for George Soros’ Open Society Foundation, he averred:

I’ve—I looked— you know, directly at the— at the reality, I got to conclusion that yes—the reality in the West Bank does meet at least the legal— definition of—the crime of apartheid.

So Sfard’s determination that Israel is imposing apartheid on the West Bank is old news, just like the moribund annexation plan.

Also old is the falsehood that there are West Bank roads for Jews only. The canard has been long debunked, and multiple media outlets have corrected the point. While limited sections of West Bank roads are barred to Palestinian traffic, they are open to all Israelis, Jewish, Christian and Muslim alike. But Estrin nevertheless tries to salvage the discredited apartheid roads smear and even takes it to a new nadir, reporting:

There’s no law making this an Israeli-only road, but it’s designed to skirt Palestinian villages. [Sfard] says the separation is a hallmark of apartheid.

Remarkably, by Sfard’s expanded definition of apartheid, even this particular road, which is open to Palestinian traffic as well as Israeli traffic, qualifies. 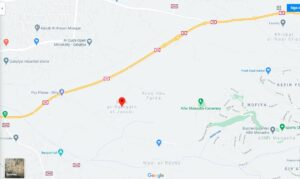 We make our way to the village of Arab Ramadin. Israeli officers have come here and asked villagers to pack up and leave. The Israeli lawyer thinks Israel wants the land to expand a nearby settlement.

Village leader Kasab Sha’ur claims: “They come here and promise us money and land somewhere else. There is daily pressure on people here to try to get us to leave.”

Estrin continues:”He hands me the permit paper he has to show Israeli guards whenever he comes and goes.”

A source from COGAT, Israel’s Coordinator of Government Activities in the Territories, disputed NPR’s claims about Arab Ramadin. Speaking to CAMERA, the COGAT official said most of the homes in Arab Ramadin are legally built and there is no threat of expulsion, no pressure to leave for these residents. A few individual buildings were built without permits, and therefore have demolition orders. He emphasized that evacuation orders are issued when buildings lack permits, and contrary to Sfard’s speculation. have nothing to do with settlement expansion.

Moreover, the assertion that Kasab Sha’ur must show a permit “whenever he comes and goes” is inaccurate. Arab Ramadin lies in what’s called the “seam zone,” meaning that it is located west of Israel’s separation barrier. If its residents would like to cross the barrier, they show a permit and passes through, said the COGAT official. All residents of Arab Ramadin automatically receive these permits, enabling them to pass.

Later in the broadcast, Israeli political science Avraham Diskin rejects the apartheid charge as “nonsense,” saying: “We all work with Arabs. I have Arab students. I have Arab colleagues.”

To which Estrin responds:

He’s mostly talking about the fifth of Israel’s population who are Arab citizens with Israeli voting rights. Palestinians in the West Bank are different. They can’t enter Israeli without permission. They’re separated by a cement wall and high-tech fences.

While Palestinians have a different status than Israeli Arabs, that does not make them victims of apartheid, contrary to Estrin’s implication and Sfard’s explicit assertion. Internationally recognized definitions make clear that the term apartheid applies to separation along racial lines. The fact that Israeli Arabs pass freely through Israel’s separation barrier into the West Bank while Palestinians require a permit to do so underscores that the separation is along national, not racial lines, and is therefore definitionally not apartheid.

Notably, Palestinians have the right to vote for their own government in Palestinian elections — when they take place (Palestinian President Mahmoud Abbas is now 15 years into his four-year term).

Estrin also interviews Benjamin Pogrund, a prominent anti-apartheid in South Africa who moved to Israel and long argued that Israel’s presence in the West Bank is not apartheid, but who voiced fears last summer that apartheid would result from annexation. Introducing Pogrund, Estrin states:

The debate shifted this year when Prime Minister Benjamin Netanyahu vowed to annex some of the West Bank into Israel without giving Palestinians there voting rights in Israel. That got some Israelis reconsidering the apartheid questions.

Once you annex, though, and you then have people subject to your control who don’t have a say in their lives, that’s apartheid.

But, the plan that Prime Minister Netanyahu considered and then abandoned had proposed that the Palestinian population, concentrated in the city of Jericho, would remain as a Palestinian enclave outside Israeli control. Thus, voting rights would not have been extended to Jordan Valley Palestinians, because the sovereignty would not be applied to them. He stated:

They will remain as a Palestinian enclave. There’s no need to annex Jericho. There are one or two clusters. You don’t need to impose sovereignty over them, they will remain Palestinian subjects if you want. But there will be security control over this too.

As Area C of the West Bank, Israeli already has security control over the Jordan Valley.

Thus, Pogrund’s fear of Israeli annexation of Palestinians who would be denied voting rights was not part of the shelved plan.

In an Associated Press article, “Israeli annexation plan draws apartheid comparisons,” Pogrund was extensively quoted warning about what he saw as the potential for apartheid in the West Bank in the event of Israeli application of sovereignty over Palestinians. That article was back in June, when the sovereignty plan was on the table and dominating news headlines. Six months later, with sovereignty long off the agenda, what justification is there for NPR conflating Pogrund’s fears of what might have been had annexation gone forward in a specific way with a supposed “debate” on whether Palestinians do currently live under apartheid?

On the latter, there is no debate among mainstream Israelis. As AP put it, Pogrund believes the apartheid word is “uniquely evil.” “It’s a deadly word,” he told the wire service.

And yet NPR so casually, so glibly tosses about that “deadly word,” manufacturing a fake Israeli “debate” about whether it exists in the West Bank. “Whatever apartheid means to the world,” Estrin breezily intoned in the broadcast’s conclusion, discarding the internationally accepted definitions which most definitely don’t apply to Israel’s case despite Sfard’s best efforts.