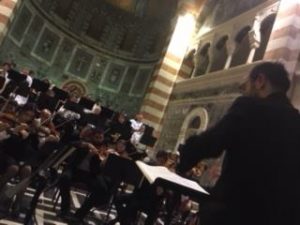 On Sept. 11 2018, NPR aired another one-sided piece that cast Israel in a negative light. The segment, “Palestinian Orchestra Finds Way Into Jerusalem To Perform Beethoven’s 9th Symphony,” which aired on NPR’s afternoon news show, All Things Considered, is ostensibly about a Palestinian orchestra and its members finding a new way to fight Israel’s occupation, through music. But in typical fashion, only one side of the story is explored — through the lens of a  Palestinian activist. The activist-musician, Ramzi Hussein Aburedwan, is portrayed as a musician on a peaceful mission that requires him to evade Israeli security measures in order to perform in the eastern section of Israel’s capital city of Jerusalem. 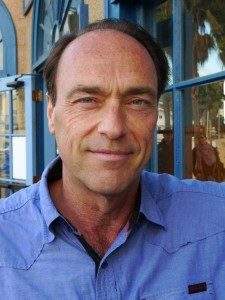 NPR’s Sandy Tolan reported the story. Tolan has a history of stories slanted against Israel. His partisanship on the topic is not a secret. For example, a April 28, 2015 talk by Tolan at Zaytuna College in Berkeley, California was co-sponsored by supporters of the BDS movement which advocates cultural and economic boycotts of Israel and whose leaders admit they seek Israel’s disappearance.

In the NPR segment, Tolan describes how Aburedwan used to engage in stone throwing at Israeli troops, but now fights peacefully with music. Tolan paints Israeli security measures as arbitrary and mean-spirited. Listeners are told of the difficulties encountered by Palestinian musicians as they try to reach Jerusalem.  Nowhere is Israel’s side of the story spelled out, i.e.  that the purpose of Israel’s measures, its security barrier and checkpoints, is to prevent Palestinian terrorists from murdering Israelis. These measures were established as a response to the murderous Palestinian suicide bombing campaign from 2001-2004 during the al-Aqsa intifada in which more than 1,000 Israelis – Jewish and Arabs, mostly civilians – and foreign visitors, were murdered by Palestinian terrorists, who crossed unimpeded from the West Bank. The barrier’s completion along with the checkpoints and raids on suspected terrorists has resulted in a 95 percent decrease in lethal attacks  from the West Bank. Nor does the segment indicate that continuing attempts by Palestinian terrorists to kill Israelis are thwarted by Israel’s security measures. (See, for example, here, here, and here.)  It is similarly noteworthy that NPR has failed to cover the recent murders of Israeli citizens by Palestinian terrorists, including the murder of Ari Fuld, an American-Israeli.

Tolan also relates that “Three American musicians [of the Ramallah Orchestra] were refused entry by Israel when they admitted why they’d come [to play in the orchestra],” but  offers no Israeli explanation as to why the individuals were denied access. What were their concerns? What intelligence might they have had? NPR interviews no Israeli to provide another perspective.

NPR has a long history of biased-against-Israel reports and a reach of approximately 30 million listeners weekly through more than 1000 public radio stations. Unfortunately, the network’s listeners are deprived a thorough analysis of the complex issues confronting Israeli security personnel as they weigh threats from  would-be terrorists on a daily basis.