Update: On Wednesday evening, after the publication of this article and two full days after Abbas’s speech Monday afternoon, the New York Times published a story and a critical editorial on the Palestinian president’s comments.

On Monday, the Palestinian president blamed the Holocaust and anti-Jewish pogroms throughout history on the Jews themselves. Jews weren’t massacred because they’re Jews, he insisted during a televised speech. They were massacred because Jews were bankers, charged usury, “and so on,” Mahmoud Abbas said.

He added that there were no attacks on Jews in Arab countries. At least, none targeting Jews for being Jews. “I challenge you to find a single incident against Jews, just because they were Jews, in 1,400 years, in any Arab country,” he said. Apparently in the Arab world, too, Jews brought upon themselves the anti-Jewish persecution and violence they so often faced.

Abbas’s latest bout of Holocaust revisionism drew rebuke not only from the Israeli prime minister, but also the German foreign minister, the European Union, the US Holocaust Memorial Museum, UN Special Coordinator for the Middle East Peace Process, the ADL, Donald Trump’s Middle East envoy, Barak Obama’s ambassador to Israel, Americans For Peace Now, and many, many others.

His comments and the forceful international reaction were widely covered in the international press, including by the Associated Press, Reuters, the BBC, AFP, Xinha, Deutsche Presse-Agentur, Deutsche Welle, The Guardian, The Independent, Time, and beyond.

The most prominent American newspaper, though, passed on the story. The New York Times, normally so vigilant its coverage of the Arab-Israeli conflict, and which even jumped on a gossip-column story focused on a recording of Sarah Netanyahu, the wife of Israeli prime minister Benjamin Netanyahu, losing her temper, didn’t see this latest example of vile rhetoric by the Palestinian president as worth sharing with readers. 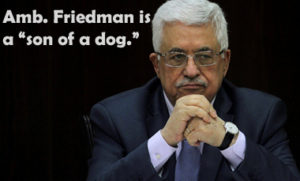 There’s a pattern here. After Mahmoud Abbas said, in reference to Jews, that there is “no one better at falsifying history or religion than them,” citing a verse from the Koran about Jewish perfidy to underscore his point, the New York Times, which covered the meeting at which Abbas made the comments, did not report his anti-Semitic words.

Later, when Abbas absurdly claimed European Jews preferred “murder and slaughter” during the Holocaust over emigration to the land of Israel, the newspaper ignored that part of his speech. And the portions of his speech in which he trafficked in conspiracy theories — Oliver Cromwell hoped to ship off Europe’s Jews to the Holy Land, Theodore Herzl wanted to “wipe out Palestinians” from Palestine, and historical Jewish immigration to Israel has “nothing to do with Jewishness” — were described by the newspaper as a “history lecture,” a stark departure from its overzealous fact-checking of various Israeli assertions.

Likewise, when Abbas called the US ambassador to Israel a “son of a dog,” his outburst was overlooked by the newspaper. By contrast, when Netanyahu had criticized a statement by the previous ambassador as “unacceptable and incorrect,” the Times covered the Israeli prime minister’s comments and an editorial slammed them as “unusually personal and unfair.”

Over the past twelve years of Abbas’s four year term as president, the New York Times has put much effort into portraying the Palestinian leader as moderate and the Israeli government as immoderate. Now, it appears the newspaper has granted Abbas a sort of “undiplomatic immunity” with its habit of looking the other way when he exposes his more immoderate, erratic, and anti-Jewish tendencies.