(Note: A slightly different version of this Op-Ed appeared in JNS on April 26, 2018)

For several weeks now, Hamas, the U.S.-designated terror group that rules the Gaza Strip, has been sending terrorists—interspersed with unarmed civilians serving as human shields—to try and infiltrate the Israel-Gaza border in a propaganda push that they call the “March of Return.” Hamas has been aided by a frequently uncritical press that, more often than not, serves the terrorist organization’s objectives, often by omitting crucial details.

No nation on earth would allow a terrorist group committed to its destruction to mass on its borders and violate its sovereignty. But no other country is held to the double standard that the Jewish state is. And no other nation is the victimof such pernicious—and unmistakable—media biasSubscribe to The JNS Daily Syndicate by email and never miss our top s

Take, for example, the swastika. 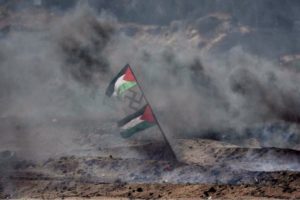 During the so-called “Great Return March,” Palestinians at the border have displayed flags embroidered with the Nazi symbol. Images, including video, of these flags have been published by The Times of Israel and were highlighted by the Israeli Defense Forces spokesperson in an April 6 tweet captioned: “No words needed.”

And indeed, major U.S. and international news outlets offered precisely that: no words.

The presence of that flag during the violent demonstrations went unmentioned in the dozens of reports filed by major U.S. news outlets, including The Washington Post, The New York Times, USA Today and others. Dozens of reporters, photographers and film crews have been present at the border, providing coverage. The Washington Post alone has published no fewer than seven reports and one editorial on the “march.” Yet not one noted the Nazi flag, which offered a good indication of what many of those massed at Israel’s border want: the genocide of Jews, which Hamas’s Mein Kampf-quoting charter calls for.

Other seemingly hard-to-miss indicators have appeared. On April 20 (Hitler’s birthday), “Palestinians at the Gaza border flew a kite marked with a swastika and carrying a petrol bomb into Israel,” The Times of Israel reported. Once again, the IDF Spokesperson’s Unit distributed pictures and video of the kite. And yet again, major U.S. news outlets failed to report it.

Similarly, on March 30, Hamas-led crowds chanted “Remember Khaybar, O Jews. Muhammad’s army will return.” As Ofir Gendelman, the Arab media spokesperson for the Israeli Prime Minister’s Office, noted the next day: “This is an Islamist Jihadist genocidal call to annihilate the entire Jewish people.” The Western press reported neither Gendelman’s comments nor the violent incitement. Ditto for Hamas leader Yehya Sinwar’s calls before the march to “eat the livers” of Israelis.

In fact, many in the press have whitewashed the violent nature of the demonstration. Hamas, Palestinian Islamic Jihad and other terrorist groups orchestrated the march, and their leaders have been clear on their ultimate objective: destroying the Jewish nation of Israel. And they’re counting on a compliant and gullible media.

Although many reporters have uncritically repeated Hamas’s false claim that the “Great Return March” is nonviolent, photographic and video evidence has shown several protesters carrying firearms, explosives, Molotov cocktails and other weapons.

Indeed, more than half of the Palestinians who have been killed by the IDF have been linked to terrorist groups. To camouflage their violent actions and score propaganda points against Israel, Hamas and its allies have been using Gazans as human shields, as well as burning tires and using mirrors in an attempt to thwart the accuracy of IDF snipers seeking to target terrorists hiding among unarmed Palestinian civilians.

The Times of Israel, Haaretz and other newspapers have published pictures of Hamas using children as human shields, yet these images—and the double war crime they illustrate—go unmentioned by major U.S. press organizations.

Clear evidence of Palestinian violence exists, but many news outlets either ignore it or present it as merely an “Israeli claim.” By contrast, some in the media have had no problem regurgitating Hamas statements. For example, Brian Stelter, who hosts a CNN show called “Reliable Sources,” treated the Hamas-run Gaza Health Ministry as credible, repeating casualty figures supplied by that terrorist-controlled entity. In an anti-Israel screed masquerading as a “World Views” analysis, The Washington Post’s Ishaan Tharoor presented dead Palestinian terrorists as nonviolent civilians indiscriminately slaughtered by the IDF—long after they were publicly identified as belonging to terror groups.

But many in the media already have their talking points.

As Bassam Tawil noted in an April 18 Gatestone Institute report, Hamas’s “press office” has issued guidelines for how journalists should be covering the demonstrations. According to Tawil, “the first order that Hamas requires the journalists to obey is to refrain from focusing on the actions of individuals participating in the demonstrations.”

The directives, issued by a group with a history of kidnapping and intimidating journalists, require that the march be presented as a “peaceful and nonviolent civilian uprising.” The participation of terrorists must go unmentioned. Palestinian journalists—many of whom serve as producers, translators and “fixers” for international news organizations—are instructed to highlight “the various personal and social aspects” of those killed at the border.

The goal is to single out Israel for international opprobrium while securing greater aid relief for the Gaza Strip, despite the fact that Hamas has a long and documented history of pocketing aid money or using it to build “terror tunnels” to attack the Jewish state.

And some outlets have played along more than others. The Washington Post, for example, has filed several dispatches that echo Hamas talking points. An April 28, 2018 report “Blasted Limbs, Broken Dreams,” by reporters Erin Cunnigham and Hazem Balousha offered a striking example.

In more than 1500-words, with seven pictures and an online video, The Post focused on young Palestinian Arabs who have been injured in the violent demonstrations at the border. Once again, the paper uncritically quoted casualty claims by the “Palestinian Health Ministry”—failing to inform readers that it’s a Hamas entity. Cunningham and Balousha also reported that “since the protests began, Israeli troops have killed 43 Palestinians”—omitting that the majority of these casualties have been linked to terrorist groups; a fact substantiated by the Meir Amit Intelligence and Terrorism Information Center in a report published two days before The Post’s article (“Think Tank: Majority of Gazans Killed During the ‘Great Return March’ Were Terrorists,” CAMERA, April 26, 2018). And once again, The Post minimizes the fact that the demonstrations were violent, writing “Israeli officials say the protest along the border fence were violent…”

Yet, the report evidenced more troubling flaws. As the blog Israellycool noted (“Washington Post Should Win a Medal for this Media Bias,” April 29, 2018), it’s deeply suspicious that a majority of the injured Palestinians that The Post found to interview were budding athletes. How convenient. Additionally, one of those reportedly injured, Alaa al-Daly, told The Post that he was injured while rushing to help a wounded demonstrator. But as Israellycool pointed out, al-Daly told another outlet, Middle East Eye, that he was shot while standing around.

Similar to another nearly 1500-word Post dispatch, the paper claimed that economic despair—purportedly the result of an Israeli blockade—was motivating the protests (“Behind Bloody Gaza Clashes, Economic Misery and Piles of Debt,” April 23, 2018). Yet, neither report informed readers that the Israeli blockade is a security measure designed to prevent weapons and harmful material from reaching Hamas. Israel allows other supplies, including those for medical needs in. Of course, if Hamas would just give up its commitment to destroying Israel, the blockade and state of war would end. But this option—and Hamas’s continual refusal of such a possibility—is not discussed by The Post.

While many in the media have fixated on the “economic misery” of everyday Palestinians as a chief factor in the demonstrations, few have noted that a violent anti-Semitic terrorist group is clearly ill-suited to governing. To do so would require discussing Palestinian Nazi flags, kite bombs and human shields. And that would mean departing from the Hamas-approved scripts.