After twice publishing a book review which erroneously referred to Israel’s government as “the government in Tel Aviv,” The New York Times has corrected, first online and finally, yesterday, in print as well. Yesterday’s print correction stated:

A review on Dec. 19 about “Master of the Game: Henry Kissinger and the Art of Middle East Diplomacy,” by Martin Indyk, referred imprecisely to Tel Aviv, implying that it was the seat of Israel’s government. Israel’s government is in Jerusalem, not Tel Aviv.

At the time, CAMERA contacted The Times to point out that Suri wrongly referred to Tel Aviv as the capital of Israel with use of the common journalistic practice of referring to a nation’s capital as shorthand for the country’s government. Suri, a history professor at the University of Texas, Austin, and the Lyndon B. Johnson School of Public Affairs, erred:

As Washington sent billions of dollars to Israel and Egypt, many groups in the region turned their anger against the United States. When the dictator in Cairo suppressed dissidents and the government in Tel Aviv sponsored new Jewish settlements, Washington became a target for the discontented.

Of course, Israel’s capital and seat of government is in Jerusalem, not Tel Aviv. 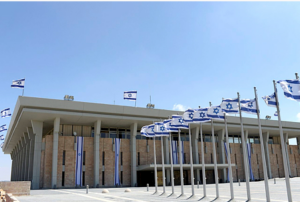 The Knesset in Jerusalem, Israel’s capital and seat of government (Photo by Kobi Gideon/GPO)

Not only did The Times at that point fail to set the record straight about such a basic fact as Israel’s capital after editors were alerted to the problem, but incredibly, the paper republished the review, including the falsehood, again on Dec. 21.

With the review’s republication last month, CAMERA again reached out to the Paper of Record, reiterating that Israel’s government sits in Jerusalem, and not Tel Aviv, as reported. This time, the message got through. The following day, editors changed the digital article to state “the Israeli government,” as opposed to “the government in Tel Aviv.” Moreover, they commendably appended the following straightforward correction to the bottom of the article:

For whatever reason, the correction in the print edition was delayed until just yesterday.