After corresponding with CAMERA staff, the New York Times corrected a story that had falsely characterized the BDS campaign as seeking only an Israeli withdrawal from the West Bank.

The Aug. 21 article had claimed BDS, an anti-Israel boycott, divest, and sanction campaign, “advocates cutting ties with Israel until it ends its occupation of the West Bank.”

BDS, which targets Israelis for boycott but has also taken aim at non-Israel Jews, seeks to impose a range of demands that, according both to proponents and opponents of the campaign, would lead to the destruction of Israel.

The New York Times correction, published in print on Aug. 29, removed the passage casting BDS as merely anti-occupation and replaced it with language that, though less precise, is more accurate:

An earlier version of this article referred incompletely to the Boycott, Divestment and Sanctions movement. It is an organization that promotes strong advocacy for Palestinian interests and hostility to the policies of the Israeli government.

The correction is an imperfect improvement. The paper has a long history of mischaracterizing BDS by downplaying its extreme goals and suggesting it seeks only to influence Israeli policy in the West Bank. For editors to now acknowledge BDS isn’t just an anti-occupation group is an important step, and will hopefully lead to more complete and informative descriptions of the campaign in the future. (That said, readers should have been informed that the campaign isn’t just hostile to the policies of this Israeli government, as the correction put it, but to the Jewish state’s very existence.)

BDS leaders have repeatedly made clear, and have even explained in the pages of the New York Times, that it’s not enough for Israel to “end its occupation of the West Bank.” To quote BDS co-founder Omar Barghouti’s rhetorical question-and-answer to himself, “If the occupation ends, let’s say, would that end your call for BDS? No it wouldn’t.” (The video was uploaded to Youtube on Feb. 24, 2010 but subsequently removed.) 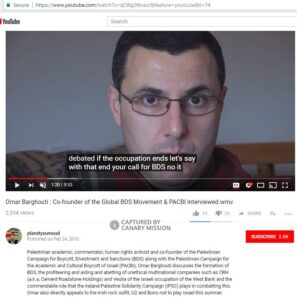 BDS’s intent to continue targeting Israel even if Palestinians have their own state in the West Bank is underscored, too, in the BDS manifesto, and reiterated in a letter Barghouti wrote to the New York Times protesting the paper’s depiction of his campaign as being merely opposed to the occupation. That letter to the editor states in part:

Regarding your editorial opposing Israel’s latest anti-boycott law, the goal of the global Palestinian-led B.D.S. movement … is not only to end the ”occupation of the West Bank” …

… B.D.S. has consistently called for … [the] right of Palestinian refugees to return to lands from which they were forcibly displaced during Israel’s establishment in 1948.

The “return” demand, which calls for the children and grandchildren of Palestinian refugees from the 1948 war against Israel to migrate en mass not to a future Palestinian state but to Israel, is broadly understood as a way to demographically eliminate the Jewish state. Don’t take it from Israel and the international community. BDS leaders are perfectly open about the consequence of their goal. As the same Omar Barghouti acknowledged, “a return for refugees would end Israel’s existence as a Jewish state.”

The BDS manifesto further demands that Israel dismantle all of its security barrier, which was built in response to a campaign of Palestinian suicide bombings targeting Jewish civilians.

So again: as the New York Times commendably acknowledged, BDS is not about “cutting ties with Israel until it ends its occupation,” and it’s wrong for any journalist to suggest as much. Reporters have an obligation, instead, to forthrightly explain BDS’s other demands — particularly the demand for a “return” of millions who have never set foot in Israel, which is meant to gerrymander into oblivion the Jewish voting block and eliminate Jewish self-determination.

This demand is central to BDS’s aims, and central to why the largest Jewish organizations, from the ADL to the AJC to the Conference of Presidents of Major American Jewish Organizations, have described BDS as antisemitic.