You’d have a hard time finding anyone who would deny that Students for Justice in Palestine (SJP) is an anti-Israel group. 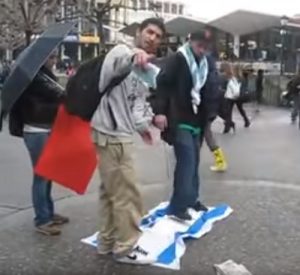 SJP activists at Berkeley standing on an Israeli flag.

According to the Anti-Defamation League, a prominent civil-rights NGO dedicated to fighting anti-Semitism and other forms of bigotry, SJP is “the primary organizer of anti-Israel events on U.S. college campuses,” and “has consistently demonized Israel.” Indeed, it is among “the worst of the worst” of radical groups that slur the Jewish state, the ADL argued in a document about anti-Israel activism. Jonathan Schanzer, a senior official with the Foundation for the Defense of Democracies and a former terror finance analyst with the U.S. Treasury Department, has documented disturbing links between SJP and Hamas-affiliated organizations.

But according to the New York Times, even being the president of an SJP chapter isn’t quite enough to establish one’s anti-Israel bona fides. In a piece about Lara Alqasem, a former SJP president at University of Florida who was controversially barred from entering Israel earlier this month, the Times told readers that “Ms. Alqasem’s credentials as an anti-Israel activist are far from clear-cut.” The article cited Alqasem’s study of Hebrew and her attendance at a lecture by a Holocaust survivor, though it did not elaborate on why a well-credentialed anti-Israel activist wouldn’t want to learn Hebrew or about the Holocaust.

Nor did the piece mention the ADL’s unflattering assessment of SJP, or share that Alqasam’s branch of SJP approvingly quoted the assertion that Israel’s “days are numbered” right around the time Alqasem was preparing to run for the group’s presidency. To many observers, this is information that certainly points to Alqasam being a “clear-cut” anti-Israel activist.

The New York Times, for its part, could conceivable respond that in a world full of nuance, nothing is really so clear cut. Or could it? Just a few weeks earlier, this same newspaper had no problem slurring Kenneth Marcus, a U.S. government official whose previous work focused on countering anti-Semitism, as supposedly a “longtime opponent of Palestinian rights causes,” a clear case of opinion and advocacy appearing in the news pages and an egregious violation of the newspaper’s promises of impartiality.

Lara Alqasem’s branch of SJP insists on Facebook that Israel’s days are numbered.

In the pages of the New York Times, radical anti-Israel activists who led organizations dedicated to the elimination of the Jewish state are not necessarily anti-Israel activists, but people who defend Jews are certainly “anti-Palestinian.” This isn’t about nuance, then. It is about a newspaper whose editors are taking sides, tilting the scales, and telling people what they should think instead of arming them with facts that allow them to reach their own conclusions.

The same article misinformed readers in multiple ways when asserting, “Israeli officials consider the B.D.S. movement to be anti-Semitic and bent on Israel’s destruction, since it also promotes the right of return for millions of Palestinian refugees to their former homes.”

It isn’t only Israeli officials who consider the B.D.S. movement to be anti-Semitic. Indeed, on the very day the news story about Alqasem appeared in print, a piece on the New York Times website by two American Jewish columnists — columnists who are critical of Israel’s decision do deny entry to Alqasem — supported the view that BDS is “a thinly veiled form of bigotry.”

And it is incorrect to cite millions of Palestinian refugees wanting to return “to their former homes.” Those reading the passage are likely to understand, wrongly, that millions of refugees today were themselves displaced from homes they owned or lived in. In fact, nearly all of those “millions” are the descendants of those who fled or were forced from their homes as a result of the the 1948 war; they never lived in the homes in question, and were born decades after the homes were owned or occupied by their parents or grandparents. Only about 30,000 of those designated as refugees, and not “millions,” have former homes in Israel.