On May 17, in the midst of fighting between Israel and Hamas, France24 analyst Khaled Gharabli made a series of assertions – unreserved yet unfounded – on the network’s Arabic channel. 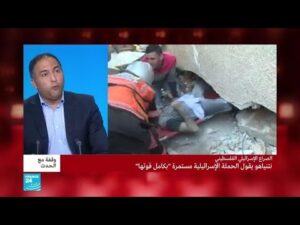 When asked by the host why a ceasefire still seems hard to reach, he answered: “Because the United States provides coverage for Israeli PM Netanyahu to continue doing whatever he wants in Gaza.”

He then framed the entire debate regarding the anticipated ceasefire as if it depends solely on Biden taming Israeli aggression and ending American support of Israel at the United Nations.

Explaining why Israel’s actions in which Palestinian civilians were inadvertently harmed are “perhaps graver” than Hamas targeting Israeli civilians, he claimed:

[In addition to the greater number of Palestinian casualties,] it is also graver because – if Hamas is being presented in the international community, in the West, in the United Stated it is classified as a terrorist organization – Israel is a democracy, meaning a law-abiding state, respecting international law, which is presumed to be more compliant with that international law when carrying out attacks. It also possesses advanced technology which allows it to […] better avoid civilian casualties.

The Israeli excuses which are now issued, that Hamas uses civilians as human shields, truthfully, no longer convince many [people], these excuses.

Gharabli went on to quote the Associated Press (AP) denial of any Hamas activity taking place inside the destroyed al-Jalaa tower, which hosted AP’s and al-Jazeera’s headquarters in the Strip, and the agency’s demand from Israel to present evidence for this claim.

As a matter of principal, any side to a conflict, when accusing the other side of such a severe allegation, is put under doubts. Eventually, [it is] an international investigation that would determine whether civilians have indeed been taken as human shields, or not.

But facts [on the ground] also negate the Israeli version, what AP said, and the facts we see, when we see the views, children that are taken out from beneath the ruins, we see entire families being taken out, children with their mothers, an entire household can be taken out – and we see neither weapons nor Hamas militants, and we do not hear from the Israeli authorities names of Hamas officials killed in this attack, or of Hamas leaders killed in this attack.

Therefore, in truth, what has been going on amounts to a war crime, I say “amounts,” because these views appear to be a war crime, but it is assumed that an investigation committee will confirm and clearly announce this. On the international level, it is peculiar that we hear, truly, it is reasonable, acceptable and understandable of course, to criticize Hamas and to lay responsibility on Hamas and the Palestinian factions for firing bombs on Israeli civilians, but we do not hear these critiques aimed at Israel, nobody says that Israel is suspected to have broken international law, that Israel does not respect international law and that Israel should comply with that law.

Very little of Garabli’s “analysis” hold up to scrutiny:

He claimed that Israel’s actions are graver because of its democracy and law-abiding conduct;

He maintained that these actions “amount to a war crime” and an international investigation will prove it;

He argued that US support for Israel is the sole obstacle towards a ceasefire;

And that the verified fact that Hamas regularly uses Palestinian civilians as human shields is merely “an Israeli excuse” that is “negated” by reality.

He also castigated the international community’s alleged silence about Israel’s actions, which he put on the same footing as Hamas’ war crimes, as “peculiar.”

In his rant, Gharabli heavily compromised the quality of journalism. France24 should strive for higher standards of analysis and commentary, including in Arabic.