Every so often a story emerges of another sneaky attempt by anti-Israel activists to inject their biased dogma into the classroom. One of the more alarming features of this stealth campaign is the targeting of ever younger children. Such incidents are much more common than the occasional reporting on them would suggest. These devious activities usually only come to light when an outraged parent of a child in the classroom decides to publicly complain.

In Ithaca, New York, a cultish anti-Israel group known as Jewish Voice for Peace conspired with a local activist teacher to slip Palestinian agitator Bassem Tamimi into what was supposed to be a session introducing third graders to the concept of human rights. The event occurred at the Beverly Martin Elementary School on September 18, 2015. Afterwards, Jewish Voice for Peace gloated about their little coup on Facebook.

At nearby Cornell University, law professor William Jacobson got wind of the affair and wrote about it in his blog, Legal Insurrection. Tamimi’s gig is to use his children, especially, his little blond daughter, to entrap Israeli soldiers by provoking them until they are forced to react. Jacobson reports,

Tamimi’s children and other children from the village of Nabi Saleh are encouraged to confront Israeli soldiers in the hope of provoking a reaction. The children are surrounded by a phalanx of photographers and videographers waiting for the viral moment when the Israeli soldier reacts, which then is fed to the media through the Tamimi media operation and international activists who often participate. 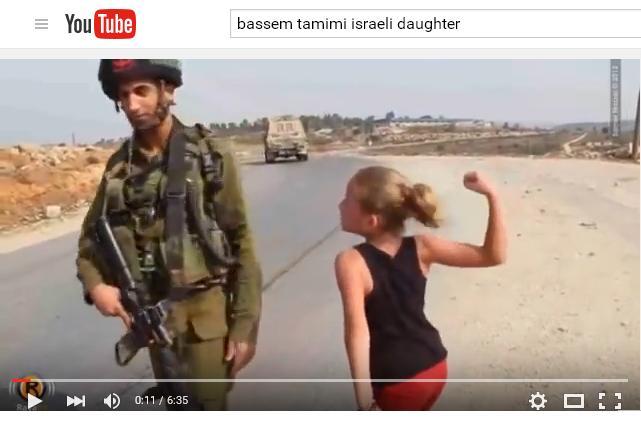 In one video Tamimi’s daughter taunts and eventually punches an Israeli soldier while videographers film the provocation.

The connection to the Ithaca school was made through Ariel Gold, an agitator with Jewish Voice for Peace. Jewish Voice for Peace is an organization that tries to conceal its anti-Israel vehemence with a deceptive name. It defames and tries to delegitimize Israel wherever it can, spreading hoax stories about atrocities allegedly committed by Israelis. Nine years ago, the author of this piece refuted a guest editorial in a Detroit newspaper by Jewish Voice for Peace alleging a massacre committed by Israeli soldiers that had already been refuted and repudiated by the original accuser in a court of law. Like Tamimi, Gold employs her own children in her agit-theater. Gold has helped arrange a tour through the United States for Tamimi. 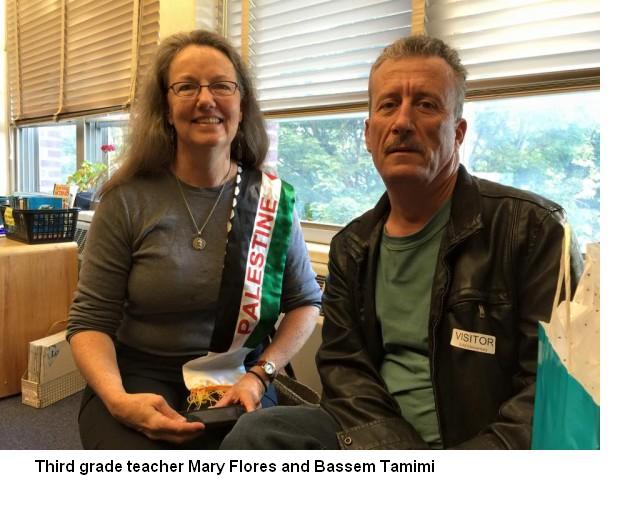 The teacher of the class exposed to Tamimi is Mary Flores, who according to Jacobson, is an activist in her own right. She is quoted as saying, “It was amazing how clear the children were about human rights. Bassem was so gentle with them.” Tamimi tells the children that the Israeli occupiers have stolen his land. He gives a sharply biased perspective, omitting crucial information.

It would be instructive to point out Bassem Tamimi’s family pedigree. Jacobson points out that Tamimi is the relative of Ahlam Tamimi, who escorted a suicide bomber to a Sbarro pizza parlor in Jerusalem, where he blew himself up, murdering 15 civilians, including seven children. You can be sure that particular episode never comes up in Tamimi’s presentation. Nor does any informed discussion of the importance of the separation barrier, in saving lives, both Israeli and Palestinian. The “apartheid wall,” as it is referred to by anti-Israel activists, was constructed from 2002-2004, during a period of numerous horrific suicide bombings, Since its construction suicide bombings have diminished to zero. 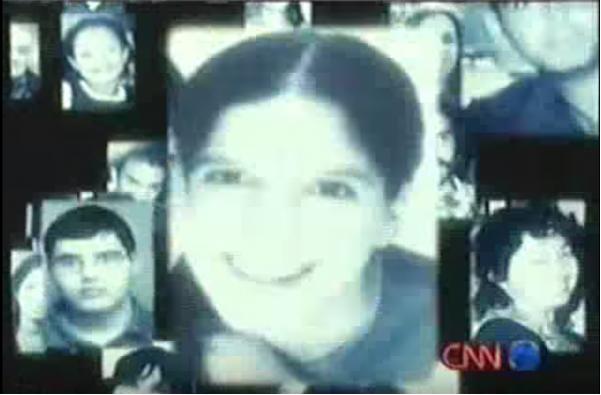 Delving further into the thicket, Jacobson reveals that the school had contact with a local anti-Zionist rabbi named Brian Walt and Amnesty International, the once venerable human rights group that has become a fixture among international organizations that demonize the Jewish state.

A statement released by the school after the Tamimi visit, whitewashes the affair, claiming that there was no anti-Israel or anti-Jewish stance presented.

The school’s superintendent, Luvelle Brown, was not impressed, nor was he comfortable with what happened. He called for a review of the procedures for inviting guests to speak in front of classes. He also agreed that there was no evidence that the Israeli perspective was presented to the children.

What occurred in the Ithaca elementary school is not unique. It is part of a larger effort to indoctrinate impressionable children under the pretense of presenting the Palestinian perspective. The starting point of the problem here is that the conflict is presented as simply competing perspectives, avoiding the responsibility to actually present an account substantiated by the facts. But that’s not where the problem ends. Indoctrination is the inevitable destination.

One example of this is a curriculum provided to schools free of charge, an important inducement, called the Palestine Teaching Trunk. The authors of this curriculum state: “The focus on Palestinians, rather than on Israelis, is a deliberate educational choice. Palestinians are much less written about, focused on, or humanized in our American press.” In reality, Palestinians receive inordinate attention, in the media, in schools, at universities, at art museums, at film festivals. Far more attention is paid to the several million Palestinians, than say to the tens of millions of Syrians, Iraqis, Yemenis, Sudanese, Congolese and entire regions of the world whose plight is far worse than that of the Palestinians by any objective measure (see the United Nations’s own statistics on longevity, child mortality, health, literacy, access to medical care, clean water, etc. and its annual “human development” rankings).

One only need review the resources used by the Palestine Teaching Trunk to understand the seriousness of the problem. For example, the materials include readings from the story of Rachel Corrie, a college student who joined the radical anti-Israel International Solidarity Movement and was manipulated into injecting herself into a dangerous and ultimately lethal situation by her mentors. Submissions by radical anti-Israel agitator Phyllis Bennis and another revisionist, Simha Flapan, are included in the History portion of the curriculum. The curriculum pays a lot of attention to alleged “war crimes,” and these are not referring to the terrorism of Hamas or Fatah. One discussion question asks, “Is Israel a democracy or an apartheid state?” Another discusses genocide. It doesn’t take much imagination to figure out what is going on here.

The problem perpetuates in part because activists are largely unopposed. The anti-Israel indoctrinators find teachers aligned with their viewpoint. Once they do, they encounter little, if any, resistan
ce from school administrators.

When alerted to the problem, the reflexive response of most school administrators is to sweep the problem under the rug and stonewall any complaints. Parents may be upset with what has occurred, but are often afraid to speak up for fear that teachers and staff will take it out on their children. Often there is the wish that local Jewish organizations will get involved. But in most cases, such hopes are in vain. For the most part, Jewish organizations and civic officials who are supposed to safeguard children’s education are AWOL. In some cases they even line-up behind the obfuscating administrators to help marginalize the complainants (review the controversy in the Newton, Massachusetts schools for an example of this phenomenon).

Unless parents are willing to come forward and persist with their concerns, or even better, to organize as a group and put pressure on school administrators and local school boards, increasing indoctrination of schoolchildren can be expected. Confused parents will then be left to lament over why their children rejected their values, beliefs and empathy with Israel.