Most recently, he did it in a sermon he gave on MLK day, two days after a hostage taking at a synagogue in Texas. During his sermon, Nelson declared that, “The continued occupation in Palestine/Israel is 21st century slavery, and should be abolished immediately.”

Nelson then called on American Jewish leaders, who were still reeling from the hostage-taking in Texas, to join his mendacious attack on the Jewish state, proclaiming: “I would also hope that the Jewish community in the United States would influence the call to join the US government in ending the immoral enslavement.”

As bad and offensive as his MLK sermon was, he used far worse rhetoric in a video posted on the PCUSA’s website on June 8, 2021. In the video titled, “This is Not What God Intended,” available here, Nelson declared that his fellow Christians need to start looking at Jewish individuals in the United States who are supporting “evil” Israeli policies, which he characterized as “20th century slavery” and “some of the worst atrocities the world has ever seen.”

This is beyond the pale. One can criticize Israel legitimately, but to portray the suffering caused by Israeli policies as “some of the worst atrocities the world has ever seen” is simply a lie.

Has Nelson not been paying attention to the mass murder of civilians by the Assad regime in Syria?

And why is it necessary to target American Jews with such hateful opprobrium? A significant majority of Americans support Israel. American Jews represent a small percentage of the American population and are dwarfed in number by Christians who support the Jewish state. 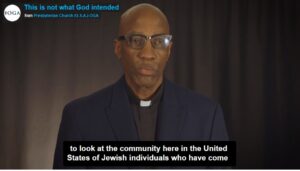 A screenshot from the video in question. (Vimeo.)

Why is Nelson singling out American Jews for their support for Israel in a video? Why direct the PCUSA’s animus toward Jews who live next to Presbyterians throughout the country? Why bring up “money” and “power” and juxtapose it with the rewards of a Christian death, unless of course one was intent on implicitly invoking the notion of carnal Jews polluting the American body politic?

Is this what God intended? Is this “effective” peacemaking?

What we see here is an echoing of CAIR’s targeting of American Jews.

Nelson’s statement in this video is outrageous.

Here is a full transcript of Nelson’s dishonest, hateful and outrageous remarks.

We must deal with this issue of Israel-Palestine and do it in a way that is effective. We must begin to look at the community here in the United States of Jewish individuals who have come throughout and are supporting this particular, these particular activities that are going on.

And we must hold accountable our government over and over again, to do what is right.

What I witnessed in my visit to Israel was in fact evil. It was evil. And it remains evil.  And the Church of Jesus Christ must call it just that. And we must call the current regime to step down and we must call our President and our Congress to denounce what is taking place in Palestine-Israel

It is 20th century slavery and some of the worst atrocities that the world has ever seen. And our handprint is all over it — through all that we see in that particular region.

Particularly with the surveillance and everything else, we have found a way to help surveil that as well as taking an opportunity to support them with armaments to kill and maim and to, in all things, shame individuals who they see as less than.

That’s not the world God intended.

Note: In watching the video, viewers should pay close attention to how Palestinian stone throwers are juxtaposed with Israeli jets. This is a propaganda film intended to demonize Israel and its Jewish supporters in the U.S., pure and simple.