With “Generation Gaza: The Young Have Pride Despite Privations,” Janine di Giovanni proves that neither age nor time spent in the field dictates journalistic mastery. Antipathy can be a much more compelling influence. Thus, the veteran war correspondent’s lengthy piece in Vanity Fair yesterday is studded with basic factual errors. Her suspicion of the Jewish state’s right to exist, exposed by a few revealing words, was apparently the driving force shaping the piece, overriding decades of experience in the profession. 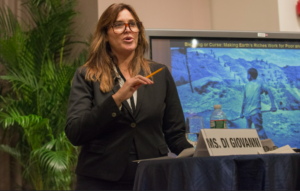 By way of introduction, di Giovanni fabricates: “After Israeli police tried to expel longtime Arab residents from East Jerusalem . . . ” Because of the Supreme Court’s May 9 move to delay any decision on eviction, the Israeli police did not try to expel residents. Therefore, her claim about a police effort to evict is sheer invention. (In fact, to this day police have not tried to evict the families; in November, the residents were offered and rejected a compromise which would have secured their ongoing residence for the next 15 years.)

Hamas and Islamic Jihad launched rockets at cities and communities within Israel’s pre-1967 boundaries, that is, within Israel itself, and not at settlements, as di Giovanni reported.

As the Associated Press reported May 9 (“More Jerusalem clashes on the eve of contentious Israeli parade”):

Late Sunday [May 9], Palestinian militants in the Gaza Strip fired four rockets toward Israel, setting off air raid sirens in southern city of Ashkelon and nearby areas, the Israeli military said. It said one rocket was intercepted, while two others exploded inside Gaza. There were no reports of damage or injuries.

Ashkelon is a large city on the coast in southern Israel, internationally recognized as part of Israel, not a settlement. There are no settlements in “nearby areas.” 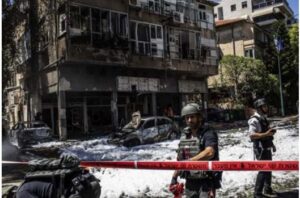 Ramat Gan, central Israel (not a settlement), hit by a rocket from Gaza in May 2021 (Photo from PalInfo Twitter account, May 16, 2021, via Amit Meir Intelligence and Terrorism Information Center)

The next rocket attacks came May 10 in the morning, with three rockets fired at southern Israel, not West Bank settlements. Then, that evening, Hamas fired at Jerusalem — also not a settlement — and followed up quickly thereafter with barrages on Ashekelon, the southern city of Sderot, and other southern communities. Not West Bank settlements. AP reported (“Hamas launches new attack on Israel after Jerusalem clashes”):

The Hamas militant group on Monday launched a rare rocket strike on Jerusalem . . .

Shortly before midnight, the Israeli army said at least 150 rockets had been fired into Israel. That included a barrage of six rockets that targeted Jerusalem , some 100 kilometers (60 miles) away. It set off air raid sirens throughout Jerusalem, and explosions could be heard in what was believed to be the first time the city had been targeted since a 2014 war.

When violence spread to the Al-Aqsa mosque in Jerusalem, one of the holiest sites in Islam, Israeli security forces clamped down, using rubber bullets and stun grenades on worshippers.

Israeli security forces did not use rubber bullets and stun grenades on “worshippers” in the Al Aqsa mosque. At the end of prayers, hundreds of Palestinians began attacking Israeli police. As Haaretz‘s Nir Hasson and Jack Khoury reported May 8:

Tensions boiled over after the evening ​​​prayer, when hundreds of Palestinian worshippers began hurling stones and other objects at the Israeli forces, who responded with riot gear. (Emphases added.)

In other words, the police cracked down on Palestinians who were rioting, not praying. According to the police, the rioters also fired off fireworks at the police. Why does Di Giovanni fail to report the Palestinian violence carried out against police which prompted the police’s riot control response?

Separately, she refers to the Al-Aqsa mosque as “one of the holiest sites in Islam,” but ignores that it is built on the Temple Mount, which has been the most sacred site in Judaism since long before the advent of Islam and the Muslim conquest of Jerusalem. (This ancient Jewish connection to the Temple Mount in particular, and Israel in general, speaks directly to the question of the Jewish homeland, the final point below.)

Indeed, the World Bank cites Hamas’ 11-day war against Israel along with covid-19 as the primary causes for the Gaza Strip’s high unemployment compared to the West Bank. The World Bank reported in November:  “The overall rate masks a wide regional divergence whereby unemployment in the West Bank reached 16.9 percent in Q2 2021 while in Gaza it was 44.7 percent, reflecting the effect of the 11-day conflict compounded with worsening COVID-19 conditions.”

Further on, the World Bank expounds on a myriad of factors:

External trade and mobility restrictions are among the main constraints to job creation in Gaza. In addition, domestic factors such as poor governance and a fragmented regulatory environment for business exacerbate the lack of jobs.36 While youth struggle to find opportunities, employers in Gaza also complain that workers lack relevant digital, language, and soft skills.37 More and better jobs require solid human capital and a competent workforce that match the skills’ requirements of the 21st century labor market needs, especially in ICT. Investing in human capital will support a sustainable growth strategy of a modern knowledge-based economy.

While one could attribute high unemployment generally in the territory to the external trade and mobility restrictions, those factors are tied to the Egyptian-Israeli blockade, not “Israeli occupation.” Furthermore, the World Bank specifies that particularly high unemployment among Gaza’s youth is the result of the lack of digital knowhow, language and soft skills, not the blockade or occupation.
Fifth, di Giovanni bizarrely whitewashes Hamas, citing the organization “which the U.S. and Europe have designated as promoting terrorism.” The U.S. and Europe, and many others, have not designated Hamas as “promoting terrorism.” They have designated Hamas as itself a terror organization.
Sixth, regarding the 1948 war, di Giovanni misleads “that Palestinians were expelled from their land following the Israeli War of Independence,” ignoring that the vast majority of Palestinians who left fled voluntarily, including at the behest of their own leaders, a point that Reuters Arabic was careful to correct.
Finally, in an appalling dig at the legitimacy of Israeli statehood in any borders, di Giovanni writes that Israeli Dani Rahamim “felt compelled to assert his right, as a Zionist, to what he considered his homeland.” (Emphasis added.) Would Vanity Fair similarly call into question whether citizens of any other internationally recognized country have a rightful claim on their own homeland?
Significantly, the International Holocaust Remembrance Alliance’s definition of antisemitism, which is embraced by more than 30 countries, includes “Denying the Jewish people their right to self-determination.” Di Giovanni’s calling into question an Israeli’s identification of Israel as his homeland smacks of denial of the Jewish right to self-determination.
About Palestinian claims to their homeland, in contrast, di Giovanni has no doubts. “Like other expat Palestinian intellectuals before him—Edward Said, Rashid Khalidi among them—he has a profound longing for his family and homeland,” she writes of a young Gazan ex-pat living in Turkey. Notably, she did not refer to the Palestinian’s longing “for what he considered his homeland.”
More than decades of professional experience, di Giovanni’s hostility to the very notion of a Jewish homeland, as exposed by the revealing double standard, shaped her coverage.

In response to a complaint from CAMERA laying out many of the aforementioned factual errors, Vanity Fair on Jan. 27 stated: "Respectfully, we stand by our reporting."