CAMERA Arabic last week prompted correction of a Reuters report which in Arabic inaccurately characterized all Arabs who left Israel in 1948 as having been expelled, ignoring that the vast majority fled, often at the urging of their own leaders.

Reuters’ Feb. 22 Arabic article (“Palestinian boy killed by Israeli gunfire during protest against Gaza border”) had originally stated that the protests “call for the right of the Palestinians to return to the lands from which their fathers were expelled in 1948” (CAMERA’s translation.) The original Arabic states:

It only uses the termطُرد (“were expelled/exiled/removed”). In contrast, the English version of the same article also rightly notes those who fled, stating that Gaza border protests “call for the right of return to lands from which their ancestors fled or were forced to flee in 1948.”

Recent Reuters Arabic reports have accurately noted that Arabs either fled or were expelled in 1948. Two reports from January refer to “their [the Palestinians’] homes, from which their fathers and forefathers were expelled, or from which they fled.” (Emphases added.)

In response to communication from CAMERA Arabic, Reuters editors commendably amended the copy to refer those who fled. The amended sentence states:

The protests … call for the right of the Palestinians to return to the lands from which their fathers either fled or were forced to flee.

In addition, editors commendably appended a note making clear that the article was republished with a correction to the fourth paragraph. The word “correction” was also added to the beginning of the article’s headline. 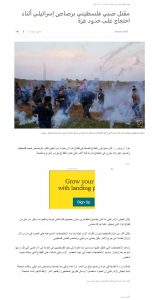 In a separate issue, the the Feb. 22 Arabic article also wrongly refers to the protesters’ “fathers” آباءhaving been expelled, as opposed to “ancestors/forefathers” أسلاف/أجداد . As noted above, Reuters’ Arabic reports from January more accurately referred to “fathers and forefathers,” as opposed to just fathers. Indeed, 70 years on, the young Gaza protesters are at least third generation after 1948. Reuters failed to correct this point.