CAMERA’s Israel office today prompted correction of an Agence France Presse feature out of Paris today (“Six key periods in Jewish history“) which initially incorrectly reported that Jerusalem became a city sacred to Jews during the Muslim conquest in the seventh century. In fact, Jerusalem held a sacred status in Jerusalem for some 1500 years prior to the Muslim conquest, and the city played a sacred role in Christianity since the first century of the common era.
The article had erred, in both English and French:

The Arab conquests began in the 7th century with the birth of Islam. In some cases, the Jews supported the conquests and in turn, were tolerated by the Arabs.

During this period, Jerusalem became a sacred place for Judaism, Christianity and Islam. 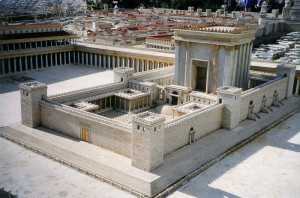 A model of the Second Temple, which was destroyed several hundred years before the Muslim conquest

Jewish ties to Jerusalem date back to the patriarch Abraham who prepared to sacrifice his son Issac on Mount Moriah, also known as the Temple Mount, Judaism’s holiest site. King David established Jerusalem as his capital city in 1004 BCE, a city that is mentioned hundreds of times in the Bible. The first Jewish Temple, built by King Solomon, was destroyed after the siege of Jerusalem in 587 BCE, some 1000 years before the Muslim conquest.  Jews from all over the ancient world would make pilgrimages to the Beit HaMikdash (Temple, which housed the Holy of Holies) three times a year to participate in worship and festivities, as commanded in the Torah.
The Temple was built, according to Jewish tradition, on the Even Hashtiya, the foundation stone upon which the world was created. This is considered the epicenter of Judaism, where the Divine Presence (Shechina) rests, where the biblical Isaac was brought for sacrifice, where the Holy of Holies and Ark of the Covenant housing the Ten Commandments once stood, and where the Temple was again rebuilt in 515 BCE before being destroyed by the Romans in 70 CE, hundreds of years before the Muslim conquest. The Temple Mount is mentioned frequently in the Bible.
In addition, Jerusalem’s centrality in Christianity pre-dates the Muslim conquest by several centuries. Jerusalem played a central role in Christianity in its first century: Christians believe that Jesus’ Last Supper took place in the city, he preached in the city, and was later crucified there.
In response to communication from CAMERA, AFP corrected the article. The amended version now accurately reports:

Jerusalem, which was already a holy site for Jews and Christians, also became revered by the emerging Islamic faith: the city was thus sacred for the three monotheist religions.

CAMERA’s timely action vis-à-vis today’s AFP article underscores the value of the organization’s work monitoring and responding to wire stories in the same news cycle as they appear. With this preemptive work CAMERA helps prevent misinformation from appearing in media outlets around the world.
CAMERA thanks Infoequitable for cooperation on the correction of the French article.