CAMERA’s Israel office today elicited Agence France Presse’s removal of a description of  Mehdi Nemmouche, charged with shooting four people dead at a Jewish Museum in Brussels in 2014, as a “‘very polite’ Frenchman.”

The trial opened Thursday of a ‘very polite’ Frenchman accused of shooting four people dead at a Jewish museum in Brussels, allegedly the first Syria jihad veteran to sate a terror attack in Europe. 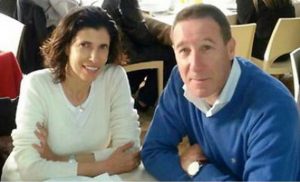 Miriam and Emmanuel Riva, Israeli tourists murdered at the Jewish museum in Brussels

CAMERA contacted AFP asking why this disputed claim about the suspected murderer’s personality warranted mention, let alone prominent placement in the very first sentence. Those readers who got as far as the 20th paragraph learned that a French journalist held captive in Syria, allegedly by Nemmouche, has a very different view of the suspected murderer. AFP buried the following:

“When I hear his lawyers say he is someone who can be very polite, very urbane, sure. He is a clever one,” former hostage Didier Francois told Europe 1 radio.

“But, as for me, I will never forget his capacity for violence.”

Notably, the first sentence of the French article does not describe Nemmouche as “very polite.” 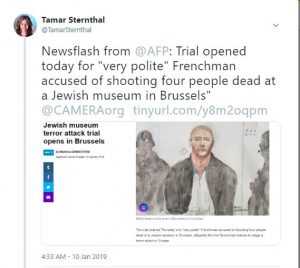 In response to communication from CAMERA, AFP editors commendably removed the description of Nemmouche as “very polite.”

CAMERA’s timely action vis-à-vis today’s AFP article underscores the value of the organization’s work monitoring and responding to wire stories in the same news cycle as they appear. With this preemptive work, CAMERA helps prevent misinformation from appearing in media outlets around the world.