Since when did Fox News start carrying water for terror groups in the Gaza Strip?

It’s a strange question that must be asked in light of the short segment broadcast by the network on March 5, 2019. In the segment, Fox News correspondent Trey Yingst relays warnings from unnamed security analysts that a war could soon break out between Israel and “factions” in Gaza Strip. The narrative that he offers to explain why war might happen places all the blame for the potential conflict on Israel. Yingst covers the story as if the “factions” in question — Hamas and Palestinian Islamic Jihad — bear no responsibility for the tensions along the boundary between Israel and the Gaza Strip.

He does this in a number of ways.

First, he reports that, “Each week, thousands of Palestinians gather at the Israel-Gaza border to protest the Israeli blockade of the Gaza Strip,” and that Israel has responded to these “protests” with “tear gas and live ammunition.” The way Yingst reports the story, it sounds and looks like Israel is arbitrarily gunning down peace protesters who pose no threat to Israeli security.

Yingst fails to report that these protesters don’t just “protest” the blockade, but have sought to break through the security barrier between Israel and the Gaza Strip. He also fails to note that Hamas leaders have called on participants to invade Israel and murder civilians who live nearby.

The protests are part of what Hamas has called the “March of Return.” That’s not about protesting a “blockade,” but a call to invade Israel. And that’s what the rioters at the boundary between Israel and the Gaza Strip have done. Yingst’s “protesters” have placed explosives on the fence and have entered into Israel territory. The rioters have also shot at Israeli soldiers with rifles. Clearly, their intentions are not good. Hamas leader Yahya Sinwar declared in April 2018, soon after riots started: “We will tear down the border and we will tear out their hearts from their bodies.”

All of this helps explain why Israeli soldiers have used “tear gas and live ammunition” against the Palestinians who are indeed trying to “tear down the border.” 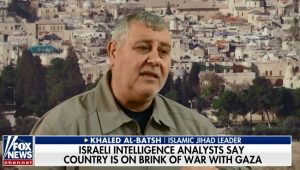 Yingst also relays complaints from Khaled Al-Batsh, a leader from Palestinian Islamic Jihad, about Israel killing “civilians” involved in the “protests.” Through an interpreter, Al-Batsh is quoted as saying, “The continuous killing of Palestinian civilians by Israeli snipers on the fence. This may cause a reaction from individuals, relatives of the killed people and this could escalate the clash and the fighting.”

In relaying Al-Batsh’s accusation that Israel is engaged in “continuous killing of Palestinian civilians,” the report fails to acknowledge that many of the Palestinians killed during the assaults on the security barrier have been members of Hamas and other terror organizations in the Gaza Strip. Last April, the Meir Amit Intelligence Center reported that most of the casualties associated with the March of Return were terrorist operatives or members of terror organizations. The report states:

The ITIC’s interim findings clearly show that terrorist operatives (especially Hamas operatives), or Palestinians affiliated with terrorist organizations, play a key role in the front lines of the “great return march” demonstrations near the fence. They are primarily involved in violent clashes with the IDF and on occasion carry out terrorist attacks. Conspicuous is the small number of civilian activists and ordinary civilians, who were involved in organizing the march, involved in rioting with the IDF. They were left behind when the violence began.

This is simply irresponsible.

Qatar has paid for the cost of the diesel fuel to increase the output of the electrical plant in the Gaza Strip in an effort to alleviate the suffering (and to decrease tensions between Israel and Hamas). To this end, Qatar has paid $10 million a month in fuel costs since late last year, which has resulted in people enjoying eight hours of electricity a day instead of the previous four hours.

Leaders in Doha have reportedly grown tired of footing the bill in the face of Hamas’s failure to improve its infrastructure. The Times of Israel reported on Feb. 19, 2019 that Qatar is frustrated “with Hamas’s foot-dragging on several large projects in the Strip, including a long-delayed high-voltage power line from Israel that could double the Strip’s power.”

Despite all this, Yingst allowed Palestinian leaders to use a shortage of electricity in the Gaza Strip — which is their fault — as a pretext for more violence against Israel.

Moreover, Yingst’s report also omitted any reference to the incendiary balloon attacks emanating from the Gaza Strip. These attacks, which had stopped for a while, started up again two days before Fox News aired its report. These attacks have caused massive damage to Israel’s natural and agricultural resources.

In May, 2018, Hamas leader, Mahmoud Al-Zahar declared that when Hamas talks “about ‘peaceful resistance,’ we are deceiving the public.”

Why is Yingst assisting in Hamas’s efforts to deceive the world about the purposes of the March of Return? And why is Fox News letting him?