CAMERA’s Israel office today prompted correction of Associated Press photo captions which had confused two Muslim pilgrimages, erroneously stating that pilgrims from Gaza have not been able to participate in the major hajj journey to Mecca for five years.

An example of the multiple AP captions yesterday which confused the major hajj pilgrimage with the minor umra pilgrimage follows: 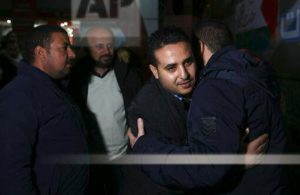 A Palestinian Muslim pilgrim hugs a relative before leaving for the hajj pilgrimage to the holy city of Mecca, while waits for a bus en route to Rafah border between Gaza Strip and Egypt, in Gaza City, Saturday, March 2, 2019. Gazan residents resume minor pilgrimage to Mecca after five years of Egyptian ban. (AP Photo/Adel Hana)

Gazans have traveled consistently to Mecca for the hajj since 2014. This is the first time in five years that Egypt has allowed Gazans to cross for the umra pilgrimage. Both pilgrimages are to Mecca, but the umra, unlike the hajj, can be carried out at any time of the year. The Gazan in the picture was leaving for the umra journey.
In response to communication from CAMERA, AP promptly corrected the captions. The corrected captions commendably make clear:

CORRECTION: IT IS THE UMRA, OR MINOR PILGRIMAGE, NOT THE HAJJ – A relative kisses a Palestinian Muslim pilgrim while waiting for a bus to the Rafah border between the Gaza Strip and Egypt, en route to the holy city of Mecca, for the umrah, or minor pilgrimage, in Gaza City, Saturday, March 2, 2019. Gazan residents resumed the umrah pilgrimage, that can be undertaken at any time of the year, after nearly five years of an Egyptian ban. (AP Photo/Adel Hana)
Donate Now