Note: The following article was published in The Algemeiner on May 13, 2021. The inaccurate and hostile Tweets documented below have since been deleted by Sebei. 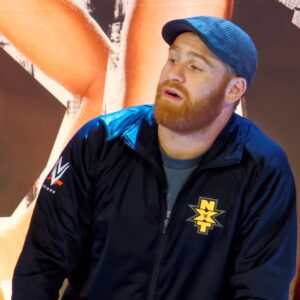 Rami Sebei, an entertainer who performs under the name “Sami Zayn” for World Wrestling Entertainment (WWE), headquartered in Connecticut, has taken to the Internet to condemn Israel, falsely accusing the Jewish state of ethnically cleansing Arabs living in Jerusalem, and seemingly supporting rocket attacks and violence against innocent Israeli civilians.

In a Tweet posted on Sunday, May 9, 2021, Sebei declared, “There is no viable moral defense for stealing people’s homes based on their ethnicity.” He then invoked the “SaveSheikhJarrah” hashtag to tell his 1.2 million Twitter followers that he was talking about Israel.

The defamatory Tweet has been retweeted more than 1,200 times and has received more than 5,600 likes on the social network, which has become synonymous with anti-Israel incitement and Jew-baiting in recent years.

There is no viable moral defense for stealing people’s homes based on their ethnicity.#FreePalestine #SaveSheikhJarrah

By accusing Israel of stealing land based on ethnicity, Sebei is broadcasting a complete and utter falsehood.

At issue is the ownership of a small number of properties in the neighborhood of Sheikh Jarrah. These homes were built on land purchased and owned by Jews since the 1870s.

The Jordanian Custodian of Enemy Property took control of the property after the 1948 War of Independence, as it did with other West Bank property owned by Jews (and Arabs) living in Israel after the war. In 1956 the Jordanian Government reached an agreement with UNRWA to use the vacant portion of the Jewish land in Sheikh Jarrah to build houses for 28 Palestinian refugee families, who in return for tenancy on the property, agreed to give up their refugee assistance and ration cards and would pay nominal rent for a probationary period of three years and three months. Those tenants who lived up to the lease terms would be allowed to sign a long-term lease of 30 years, and after that a further 33 years.

The ownership of the land was continued to be held in trust for the Jewish owners by the Jordanian Custodian. After the Six-Day War in 1967, the successors to the Jewish owners successfully filed to get their property back and asked the Palestinian tenants to pay their rent. The Arab residents at first refused, but in 1982 they and their lawyers agreed in a 1982 court settlement to recognize the Jewish owners and pay rent, in return for being considered “protected tenants,” meaning they could not be evicted if they lived up to the lease terms. Unfortunately, soon afterwards, the tenants again refused to pay their rent, and the Jewish owners began eviction proceedings, which have been ongoing for almost 40 years.

Hamas is using the Sheikh Jarrah libel to justify its efforts to kill innocent civilians with barrages of rocket attacks from the Gaza Strip, and both Hamas and the Palestinian Authority (PA) are inciting Israeli Arabs to riot against their Jewish neighbors in mixed cities throughout Israel.

This was not a spontaneous “revolt.” Hamas has been laying the groundwork for this for years, by building up their rocket arsenal, inciting their citizens (and children, via the education system) to murder Israelis, committing terror attacks against Israelis, and by remaining committed to the organization’s founding goal: to destroy Israel, and push its Jewish inhabitants into the sea.

None of this has stopped Sebei from using his WWE-trademarked identity to broadcast misinformation that is helping to incite what some experts are describing as a “Third Intifada” in the Holy Land. [Note: Since the publication of this article in The Algemeiner, Jews have been physically assaulted and targeted with venomous threats at anti-Israel rallies in Europe where the Sheikh Jarrah libel has been retailed.]

Sebei’s corporate sponsors, WWE, NBCUniversal and Fox, which broadcast his appearances, aren’t responding to queries regarding his anti-Israel propaganda on Twitter. Sebei appears every single week on Fox broadcast television on the show “WWE Smackdown.”

The day after falsely accusing Israel of ethnically cleansing Arabs from Jerusalem, Sebei attacked Andrew Yang, mayoral candidate for New York City, for supporting Israel during its time of trial.

After Yang expressed his solidarity with Israelis dealing with rocket attacks, Sebei declared that the candidate’s Tweet was “not the most tasteful statement to make within hours of Israel bombing Gaza and killing 20 Palestinians, 9 of whom were children. But then again I’m not a soulless piece of shit politician so what do I know?”

Maybe not the most tasteful statement to make within hours of Israel bombing Gaza and killing 20 Palestinians, 9 of whom were children. But then again I’m not a soulless piece of shit politician so what do I know?

Sebei has not responded to an attempt to reach out to him via his Twitter account. And his corporate employers seemingly have no issue with his behavior, as he continues to Tweet anti-Israel lies (and implicit support for Palestinian violence) on a regular basis.

Note: This article was updated on May 18, to provide more detail about the Sheikh Jarrah legal proceedings.