For decades, attention has been lavished on the Palestinians, bestowing upon this small segment of the Arab world an exaggerated importance. As a result, in media, academic and diplomatic circles, addressing Palestinian grievances was elevated to the status of the most urgent political and humanitarian cause in the Middle East.

At the United Nations, Muslim and European blocs apply a harsh and unfair double standard to the actions and policies of the Jewish state. In 2016, the Human Rights Council (HRC), over which some of the worst human rights abusers preside, passed 20 anti-Israel resolutions and only 6 against all other countries (UN Watch), even as mass atrocities –including the use of chemical weapons – continue unabated just north of Israel’s border, in Syria. This lopsided record in 2016 is typical for the HRC. Taking their cue from the Council’s agenda, compromised human rights watchdogs, like Amnesty International and Human Rights Watch, and numerous media and academics that cite reports produced by these groups, raise a clamor whenever Israel vigorously responds to cross-border attacks by terrorist organizations.

The upheavals that shook the Arab world from one end to the other starting in 2010 should have discredited the erroneous perception of the central role of the Israeli-Palestinian conflict in the region’s problems. Yet, for many observers, events of the past six years have not altered their priorities.

In 2013, U.S. Secretary of State John Kerry was determined to make restarting the Israeli-Palestinian peace process the signature achievement of his Middle East policy. In December 2016, after three years of fruitless effort, a frustrated Kerry and President Barack Obama, helped shepherd the United Nations Security Council into passing a resolution condemning Israeli settlements in the West Bank as illegal in what many saw as a parting shot at Israeli Prime Minister Benjamin Netanyahu.

Wildly distorted perceptions of the magnitude of the Israeli-Palestinian conflict prevail even among those who should know better, like foreign policy officials of the EU and its constituent states. Ron Dermer, Israel’s ambassador to the United States, in a speech to the Committee for Accuracy in Middle East Reporting in America (CAMERA) in April 2016, recounted his dismay to discover that some of his fellow European ambassadors believed the conflict to have cost millions of Palestinian lives, orders of magnitude greater than the actual toll which he estimated at 20,000.

Quantitative estimates of the human toll of other conflicts demonstrate that contrary to commonly held perceptions the Israeli-Palestinian conflict contributes minimally to violence afflicting the region. Despite persisting for 70 years, the conflict accounts for less than one percent of the estimated human toll due to wars in the Middle East/North Africa region over that time frame.

The charts and associated tables below illustrate two important facts about the conflict:

1. The Israeli-Palestinian conflict is dwarfed by other conflicts in the region; and

2. Groups identified with the Palestinian national movement have destabilized societies wherever they have established a significant presence.

Map 1 graphically shows the numerous wars and upheavals, with estimated lives lost in the region stretching across North Africa, the Middle East and South Asia, that encompasses Arab and other Islamic states. 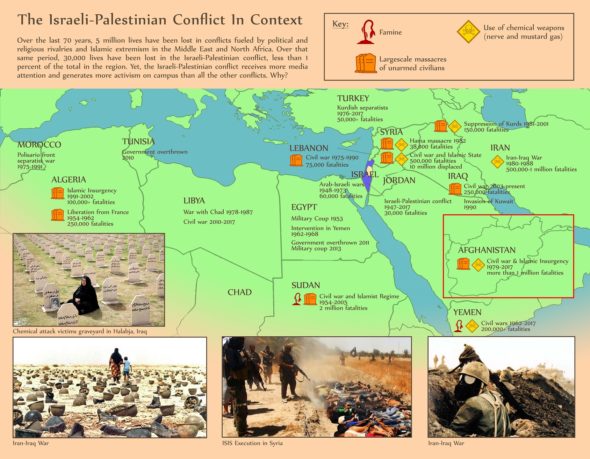 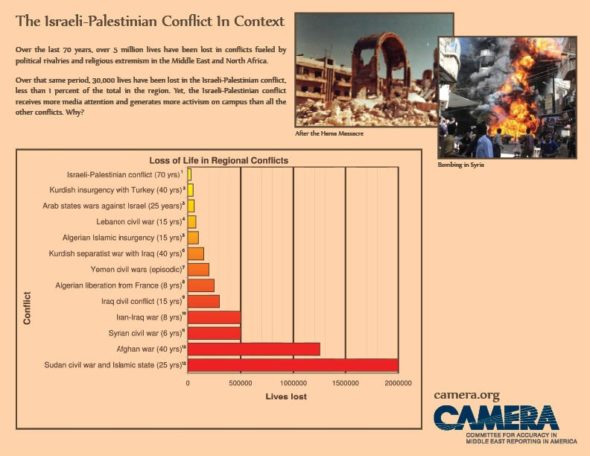 Across North Africa, the Middle East (also including Iran and Afghanistan), more than five million have perished in wars since World War II. These wars reflect common features of sectarian animosity and dysfunctional political regimes that deny their own citizens basic human rights.

It is important to note that the comparatively limited toll of the Israeli-Palestinian conflict despite its long duration is not due to Palestinian forbearance; Palestinian political discourse is replete with incitement and inducements to committing acts of indiscriminate violence against Jews and calls to extirpate the Jewish state. Rather, it is due to the restraint shown by Israel in how it uses its resounding military superiority.

Even if one focuses only on the Palestinians, a frequently overlooked element has been the destabilizing impact of Palestinian “resistance” groups on other Arab countries. Map 2 and Diagram 2 graphically show the extent to which the aggressive activities of the PLO (and its affiliates) in host countries have provoked violent reactions that led to victimization of both the host country’s civilians as well as Palestinian civilians. Lebanon in the 1970s provides the most striking example. The PLO’s attempt to create a state-within-a-in-state in Lebanon and assert itself into Lebanese politics disrupted the precarious sectarian balance existing there and led to a civil war that claimed 60,000-100,000 lives, mostly civilians. 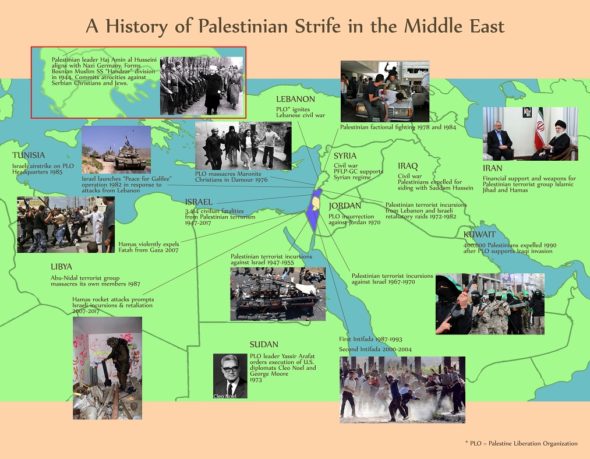 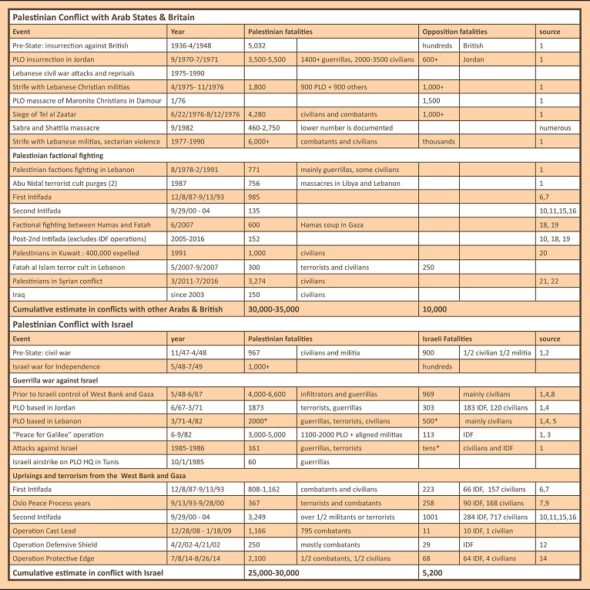 Among the Palestinian factions within the PLO itself there is sharp discord marked by violent purges and assas
sinations. As Map 3 shows, the various factions have received considerable support throughout the region. 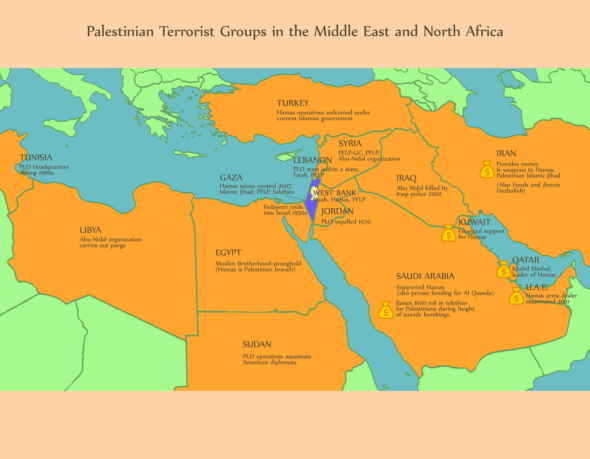 Such contextual and quantitative information is crucial to impart to a public and especially to students, who have not been provided a thorough and unbiased history of the region. It also offers insight to those who have been misled as to the magnitude and importance of the Israeli-Palestinian conflict within the troubled Middle East.

References to  Map 1 and Diagram 1:

References to Map 2 and Diagram 2:

1 Yezid Sayigh, Armed Struggle and the Search for State, numerous  citations from book

7 B'tselem, Oslo before and after,  p. 9 : 1124 Palestinians, http://www.btselem.org/sites/default/files/oslo_befor_and_after.pdf

16Jaeger, Paserman, "Israel, the Palestinian factions and the cycle of violence", https://www.camera.org/wp-content/uploads/2017/04/aer200605.pdf

Figures for this report were compiled by CAMERA Senior Analyst Steven Stotsky. The graphics for the maps and diagrams were produced by Emily Regan.