CAMERA’s Israel office last week prompted correction of a Reuters article which incorrectly identified the Mavi Marmara, which departed Turkey for the Gaza Strip in a 2010 attempt to break Israel’s legal blockade of the coastal territory, as an “aid ship.” The Dec. 27 article, “Israel envoy named in Turkey after years of strain,” erroneously cited a “2010 Israeli raid on an aid ship to Gaza, which killed 10 Turkish citizens.” The Mavi Marmara passengers were armed with weapons — which they deployed against IDF soldiers — not aid. 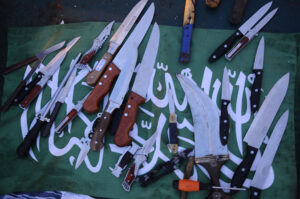 As documented in the UN’s Palmer report  (p. 47), the ship carried 546 passengers but no humanitarian aid supplies for the people of the Gaza Strip.

If the flotilla had been a purely humanitarian mission it is hard to see why so many passengers were embarked and with what purpose. Furthermore, the quality and value of many of the humanitarian goods on board the vessels is questionable. There were large quantities of humanitarian and construction supplies on board the Gazze 1, Eleftheri Mesogeio and Defne-Y. There were some foodstuffs and medical goods on board the Mavi Marmara, although it seems that these were intended for the voyage itself.  Any “humanitarian supplies” were limited to foodstuffs and toys carried in passengers’ personal baggage. The same situation appears to be the case for two other of the vessels: the Sfendoni, and the Challenger I. There was little need to organize a flotilla of six ships to deliver humanitarian assistance if only three were required to carry the available humanitarian supplies. The number of journalists embarked on the ships gives further power to the conclusion that the flotilla’s primary purpose was to generate publicity. (Emphasis added.)

Because of an editing error, an earlier version of this article referred incompletely to a 2010 episode in which Ahmed Luqman Talib was shot. He was on a ship that was part of a flotilla trying to carry aid to Gaza, but the particular vessel he was aboard was not carrying aid.

While other ships in the flotilla did carry aid, a UN report questioned the “the conduct, true nature and objectives of the flotilla organizers, particularly IHH.”  Indeed, at least eight out of the 10 casualties were members of the Jihadi IHH or other Islamist organizations, according to the Meir Amit Intelligence and Terrorism Information Center.
Its mission was “to breach a [legal] blockade on the Gaza Strip,” as Reuters has previously correctly reported.
In response to communication from CAMERA’s Jerusalem office, Reuters amended the text to more accurately cite “a 2010 Israeli raid on a ship that led a flotilla carrying aid to Gaza, which killed 10 Turkish citizens.” In addition, a note alerting readers to the change was prominently added to the top of the article, stating: “This Dec. 27 story has been corrected in paragraph 5 to show the ship was part of a flotilla.”
Reuters also corrected the Arabic version of the same article.
Separately, the Dec. 27 article also misleads that in 2018, “Israeli forces killed a number of Palestinians who had taken part in protests in the Gaza Strip.” The “protests” were in fact violent border clashes, with Palestinians attempting to break through the border with Israel, firing explosive devices, firebombs and grenades at Israeli forces protecting the border. 83 percent of those killed in the “March of Return” clashes were identified as members of terror organizations. This was no peaceful protest, a key point which readers would have no way of knowing. Reuters declined to clarify this point.