Dan Rabb got a few things wrong in a story he wrote for Religion News Service (RNS) about a group of Evangelical Protestants visiting the town of Nabi Saleh in the West Bank in May. 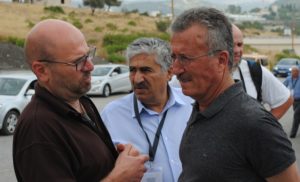 Peace activist Sami Awad (left) and attorney Jonathan Kuttab confer with Bassem Tamimi on May 29, 2018 before a presentation organized by Bethlehem Bible College as part of its biennial Christ at the Checkpoint Conference. Bethlehem Bible College brought 200 Christians from the around the world to hear Tamimi — whose family members have lauded and encouraged acts of terror against Israelis — speak about “nonviolent resistance” in the West Bank. (Photo: Dexter Van Zile)

The article, titled “Evangelicals visit West Bank to see life on the other side,” recounts how a group of people attending the Christ at the Checkpoint Conference, an event organized by Bethlehem Bible College, visited the home of Bassem Tamimi, whose daughter Ahed was recently sentenced to eight months in Israeli prison for slapping a soldier serving in the IDF.

The article, which was published on RNS’ website on June 18, 2018, has a number of factual misstatements, mischaracterizations and omissions. Some of the mistakes are innocent enough and can be corrected without much embarrassment on the part of RNS. Reporters get stuff wrong and when they do, they can correct the record.

Other problems with the article approach the level of fabrication.

RNS has been offered proof that Rabb mischaracterized what was said by people in the audience — this writer no less — who recorded the entire event Rabb wrote about.

But instead of correcting the record, RNS’ interim editor G. Jeffrey MacDonald stands by Rabb’s reporting on the grounds that is an accurate representation of what was said.

RNS’ failure to correct the record when offered irrefutable proof of how its reporter got the story wrong raises the question as to whether or not the news outlets that rely on the organization for copy can trust the reporting RNS sends to its subscribers on a daily basis.

In an era where the moniker “fake news” is used to discredit media coverage of controversial subjects, RNS simply cannot afford to allow itself to fall into the “fake but accurate” quagmire that destroyed Dan Rather’s reputation in 2004.

When describing the Sbarro massacre that took place in 2001, Rabb reported the attack “killed 15 Israelis.”

The attack killed 15 people total. Thirteen victims were Israeli, one was from America and another was from Brazil. (They were all Jews, however). This is not a huge error, but is worthy of being corrected.

The article also failed to mention that right across the valley from Nabi Saleh was located the village of Halemish where three Jews were murdered on July 21, 2017. Given that Rabb’s story is about Christian efforts to understand and ultimately, defuse the hostility between Jews and Arabs in the West Bank, this is a material omission.

Then there’s the omission of crucial information about the family that Bethlehem Bible College is holding up as an example of nonviolent.

As Petra Marquardt-Bigman has documented in The Tablet, Tamimi family members (including Ahed herself) have encouraged Palestinians to engage in rock throwing, suicide bombings and even stabbing attacks against Israelis. Ahed’s mother, Nariman Tamimi is probably the worst offender. Marquardt-Bigman writes:

Nariman Tamimi, has long been an ardent and outspoken supporter of terrorism. When the so-called “stabbing intifada” began in autumn 2015, Nariman Tamimi shared a Facebook post with graphic instructions on where to aim a knife to achieve a lethal outcome. Whenever there was a terror attack targeting Israelis, Nariman Tamimi would again take to Facebook and praise the perpetrator as a hero. No act of murder was too gruesome: in June 2016, after a teenaged Palestinian terrorist broke into a home and killed a 13-year-old sleeping Israeli girl in her bedroom, Ahed’s mother shared a Facebook post from another Tamimi family member that praised this savage act for “return[ing] to the homeland its awe/reverence.”

Bethlehem Bible College brought Christians to the home of the Tamimis — who have been promoting violence against Israelis for years — as part of an effort to educate CATC attendees about the methods of “nonviolent resistance” practiced by Palestinians in the West Bank. Sadly, the RNS article did not highlight this contradiction.

The original version of the article included the following two sentences:

Among the group is a college student in an Industrial Workers of the World T-shirt, a Palestinian keffiyeh wrapped around his neck, who tearfully apologizes to Tamimi for the United States’ role in the region. Moments later, a self-described Christian Zionist asks Tamimi how he can be mad at Israel when Palestine Liberation Organization leader Yasser Arafat refused multiple offers for peace.

These sentences, which have been corrected somewhat, have a few problems, which will be addressed below.

First, no one “apologized” to Tamimi for America’s role in the Middle East during the talk, as Rabb reports. About the closest anyone comes to apologizing for U.S. foreign policy was a woman who said she was from America and declared that her heart is “very heavy.” Here is the full transcript of what she said.

I don’t have a question as much as I want to tell you how honored I am to be here with your family. I thank you for your story. I am from America and my heart is very heavy and as a Christian I pray and I’ll continue to pray for peace for the Palestinians because God is greater than any of these political establishments and so I just wanted to say “Thank you” and I’m honored to be with you today.

Rabb either misheard or misremembered what the woman said. Or maybe he distorted what was said to support his narrative. In any event, CAMERA alerted RNS about the problem with Rabb’s reporting on this non-existent “apology” and has yet to receive a response.

Second, Rabb reports that “moments” after the women with the IWW T-shirt apologized to Tamimi, a self-described Christian Zionist (more about that below) asks a question. In fact, this writer, the person Rabb describes as a “self-described Christian Zionist” asked the first question after Sami Awad from the Holy Land Trust opened it up for questions, or even after she spoke of her heavy heart about the suffering in the Holy Land.

In other words, the “self-described Christian Zionist” did not heartlessly plod on with his question about how Tamimi “could be mad at Israel” after someone tearfully apologized for her country’s evil acts in the region or even spoke of her heavy heart about American foreign policy. This writer asked the first question, making it logically impossible for him to ask his question after anyone else spoke.

To make matters worse, Rabb mischaracterized the question asked. The audio recording of the event reveals that this writer said the following: “I heard some stories about some terrible suffering. I guess my question is, ‘How much of that suffering could have been avoided if Arafat had said yes to the Clinton Parameters?’” That’s a significantly different question than the one Rabb described in his article.

After this writer complained in a phone conversation with Rabb about mischaracterization of his question, Rabb stated that he had a recording of the event (and did not consult the tape when preparing the article for RNS). He also stated that despite whatever discrepancies there were between what was actually said and what he wrote, his paraphrase was an accurate description of the question that was asked of Tamimi. The changes that were made were necessary to keep the story from becoming too long and too confusing to the reader, Rabb stated. (In particular, Rabb did not want to have to explain the events surrounding the Clinton Parameters to his readers.)

RNS’ interim editor G. Jeffrey MacDonald has taken the same line, declaring in an email: “We believe his paraphrasing is fair and stand by his account of the sequencing.”

There was one last problem with Rabb’s reporting (which RNS has corrected). It described this writer as a “self-described Christian Zionist.” This writer does not call himself Christian Zionist because that phrase is typically used to describe Christians who support Israel out of a belief that Israel’s creation is the result of end-times prophecy. As a Roman Catholic (who grew up in the United Church of Christ), this writer does not use eschatology to inform his understanding of the Arab-Israeli conflict. Like the Protestant theologian Reinhold Niebuhr, this writer supports Israel as a matter of justice, not eschatology.

And this is simply not a tenable suggestion in light of the question actually asked (but mischaracterized by Rabb).

To its credit, RNS has changed this section, to remove the false description of this writer.

Despite this correction, the article published by RNS includes a fictionalized account of what happened at the Tamimi home in Nabi Saleh.