Had they wanted to, the editors of the San Jose Mercury News could not have illustrated the concept of “bias” more succinctly than they did with the March 31 publication of an Associated Press photo on page A16. The image in question accompanied a top-of-the-page article entitled “‘Roadmap to Peace’ touted for Mideast: U.S. to Push Plan as Suicide Bombing Injures 49 in Israel.” The photo was hardly suited to depict the March 30 Palestinian bombing outside of a café in Netanya. The photo editor passed up numerous images made available by AP, Reuters, Getty Images, and others, of victims being evacuated, medical workers on the scene of mayhem, the damaged eatery, stunned onlookers, or victims in their hospital beds.

What did the editor deem most appropriate and newsworthy to illustrate the horror of the March 30 attempt at mass murder? A photo of the killer’s tearful mother in mourning. The caption reads: “The mother of Islamic Jihad militant Rami Ghanem, center, is comforted by relatives and friends at her home in the West Bank on Sunday. Ghanem blew himself up near a Netanya café, injuring 49.” The Mercury News could not have done a better job at turning a Palestinian atrocity committed against Israelis into a supposed tragedy for the Palestinians. 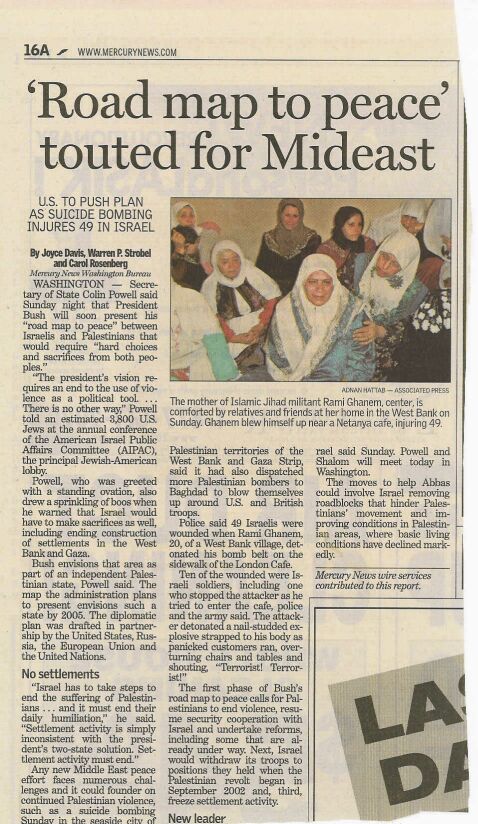