How long can The New York Times cover up for Palestinian terrorists, omit material facts, and just generally get the story wrong about Israel? It’s about 50 years now, but who’s counting?

The latest installment is East Jerusalem, Bubbling Over With Despair. All one needs to know about this article by Jodi Rudoren can be gleaned from analyzing the following two paragraphs:

The uptick in aggression did not begin with the two dozen attacks that have killed seven Israeli Jews, five of them in Jerusalem, since Oct. 1. (At least 16 suspected assailants have been shot dead by Israelis, including four Saturday, along with more than 20 other Palestinians in clashes with security forces).
East Jerusalem has been a hotbed since July 2014, when Jewish extremists kidnapped and murdered Muhammad Abu Khdeir, a 16-year-old from the Shuafat neighborhood.

Yes, it’s true – Jewish extremists did kidnap and murder Muhammad Abu Khdeir on July 2, 2014, in an unforgivable crime. But the Times omits entirely what happened right before that to provoke the Jewish terrorists: the burial of three Israeli teens on July 1, who had been kidnapped and brutally murdered by Palestinian terrorists. The three teens were Gilad Sha’er (16), Eyal Yifrah (19), and Naftali Frankel (16); Frankel held dual US and Israeli citizenship.

Even mentioning the murder of the three Israeli teens would have changed the entire complexion of the article – perhaps that’s why Rudoren omitted it.

And while the murder of the Palestinian teen was unreservedly condemned by Israeli Prime Minister Netanyahu and all leading Israeli politicians, the official Facebook page of the main Palestinian party Fatah celebrated the kidnappings of the Jewish teens with this despicable cartoon, showing them as captured mice: 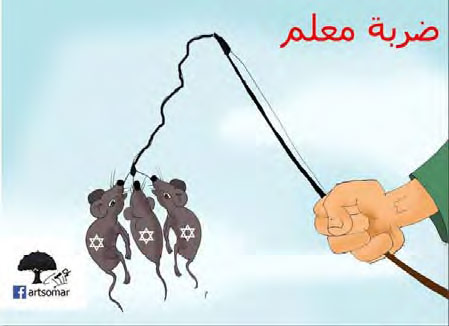 Fatah is headed by the Palestinian leader Mahmoud Abbas, who also heads the Palestinian Authority. Despite this, neither the cartoon nor a report about it ever appeared in the New York Times.

That the Times could so wilfully distort all this recent history is telling.

But the rest of the Times article was just as manipulative and deceptive. Thus, the Times interviews Fuad Abu Hamed, a “successful businessman” and resident of the Sur Baher neighborhood of Jerusalem, telling readers that:

The trash hauling bins down the road are overflowing, something [Abu Hamed] never sees when he goes to pay taxes on the other side of town.

Rudoren recounts this as if it’s true, as if there aren’t Jewish neighborhoods in Jerusalem with overflowing trash bins. Perhaps Rudoren should spend less time in trendy neighborhoods like Talpiot and the German Colony, and more time in the poor, Ultra-Orthodox neighborhood of Mea Shearim, where there’s lots of uncollected trash: 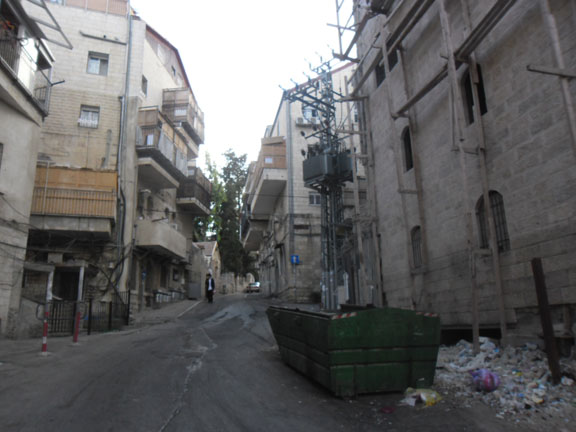 In fact, the site Yeshiva World News even carried a report titled Meah Shearim Drowning in a Sea of Trash, featuring this photo:

The view from his balcony is of sprawling Jewish enclaves that he said were “built on our lands,” and the ugly barrier Israel erected that splits Sur Baher from the occupied West Bank.

Of course Rudoren makes no effort to check whether the claim about “our lands” is false, like so many other Palestinian land claims. She apparently also never confronts Mr. Abu Hamed about why the “ugly barrier” was built: to protect beautiful young lives – like her own – from the scourge of Palestinian suicide bombers and terrorists.

Since September 2000, more than 1200 people were killed in Palestinian attacks against Israel, the vast majority before the security barrier was built. Both Hamas leader Moussa Abu Marzouq and Islamic Jihad leader Ramadan Abdallah Shalah admitted that what the Times calls an “ugly barrier” has made it much harder for Palestinian terrorists to carry out attacks inside Israel.

By 2006, even before the security barrier was complete, it was already effective:

The bottom line ignored by the Times and Mr. Abu Hamed: no ugly Palestinian terrorism, no “ugly barrier.”

In Arab East Jerusalem, there are too few classrooms, and too many dropouts. It is difficult to get a permit to expand a home; 98 illegal structures were demolished last year. Three-quarters of the population lives below Israel’s poverty line.

Contrary to Rudoren’s claims, it’s no more difficult for Arabs in Jerusalem to get a permit to build or expand a home than it is for Jews.

The number of structural demolitions conducted by the Municipality were also similar. For example, in 2009 there were 65 in East Jerusalem and 57 in West Jerusalem.

Before addressing Rudoren’s claims regarding Arab poverty levels in Jerusalem, it should be noted that poverty figures in Israel tend to overstate actual poverty. This is because they’re based on median income rather than on ability to purchase necessary goods and services, like food and housing. In other words, if Bill Gates and Mark Zuckerberg and many other wealthy people moved to Israel, this would push more people into “poverty” because the median income would increase. Or even more simply, if my neighbor wins a million dollars in the lottery, and I only win half a million, that doesn’t really make me poorer than I was before the lottery.

That reality aside, Rudoren’s claims about poverty are still grossly misleading, because she is comparing Arab families which often have seven or more children and only one parent working, with Israeli Jewish families that often have both parents working and only two or three children.

It shouldn’t be a news flash that choosing to have a very large number of children makes poverty much more likely.

So, while Rudoren is obviously trying to prove anti-Arab discrimination on the basis of poverty numbers, such statistics are not enough to prove discrimination – comparison must always be made between demographically similar groups. And it happens that among the Jews of Israel there is a group that is demographically quite similar to the Arabs of Israel, both in family size and in employment, and that is the Jewish Ultra-Orthodox community.

According to the latest figures available, in 2013 for Israel as a whole, 74% of the Ultra-Orthodox lived in poverty, as compared to just 52% of the Arabs. (Statistical Yearbook of Jerusalem, 2015; see Table VI/3 – Extent of Poverty among Families, Persons and Children, in Israel and Jerusalem)

So according to Rudoren’s logic, the Jewish state of Israel must discriminate more against the Jewish Ultra-Orthodox than against Israeli Arabs.

In Jerusalem, the numbers were slightly different, but still prove the point: for Arabs 76% lived below the poverty line, while for the Ultra-Orthodox the figure was a quite comparable 59%.

There is a big difference in Jerusalem between the two groups however, and that is in voting patterns: most of the Arab residents of Jerusalem don’t vote in municipal elections, while the Ultra-Orthodox Jews vote heavily. If the Arabs did vote, they could quite possibly hold the balance of power on the city council and arrange for greatly increased spending in Arab areas of Jerusalem. But as it is, the Jewish members of the council can’t possibly represent Arab interests as vigorously as Arab representatives would.

It should be noted that unlike having a large family, failing to vote is not necessarily an individual choice, because when prominent Arabs in Jerusalem have tried to run for office, they have been subjected to threats and violence from the PLO and similar terrorist groups. For example, in 1988 the well-known Arab newspaper publisher Hanna Siniora decided to run as the head of a list of Arab candidates for the city council. His candidacy did not last long, however:

arsonists torched his two cars, and his home was daubed with graffiti, warning him to discontinue his “involvement with the [Z]ionist enemy plans.” This intimidation, at the hands of the Popular Front for the Liberation of Palestine, prompted Siniora to withdraw his candidacy (Justus Reid Weiner, Illegal Construction in Jerusalem : Impediments to Providing Quality Public Services in the Arab Neighborhoods of Jerusalem, p 4-5).

Similarly, the PLO has also intimidated Palestinians into not voting. For example, during the 1998 elections a poster distributed by Yasir Arafat’s Fatah faction demanded that Palestinians not vote:

…not recognizing [the] legitimacy of the Israeli occupation is more important than our day-to-day services… We in the Fatah movement call our holy people to boycott the elections and to fight a war of existence and identity. (Illegal Construction, p 4.)

Unfortunately, it seems very unlikely that any attempt to really answer these and similar questions will ever come from Jodi Rudoren and her colleagues at the “newspaper of record.”

And since it seems the New York Times must always portray the Israelis as oppressors of perpetually innocent Palestinians, one final question:

Whose fault is it that the New York Times is becoming known as the “newspaper of broken record?”