First term Representative Ilhan Omar (D-Minn.) seems to be obsessed with Israel, especially on Twitter, where she’s offered such gems as “Israel has hypnotized the world, may Allah awaken the people and help them see the evil doings of Israel”:

and most recently that US support for Israel is bought and paid for by AIPAC: (It’s all about the Benjamins baby): 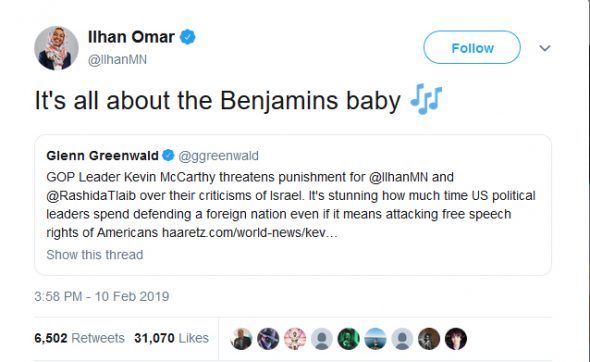 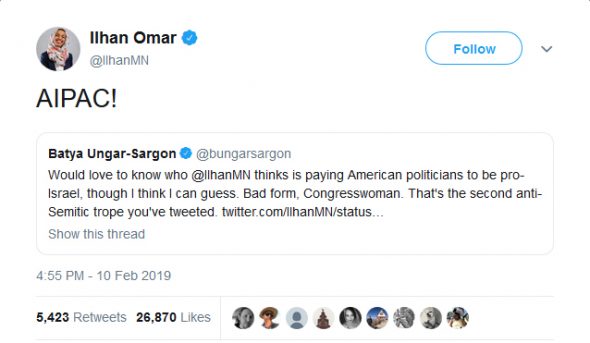 Many have decried her insensitivity and the hurt she has caused Jewish Americans and other supporters of Israel, and under pressure Rep. Omar deleted and apologized for (sort of) the tweets.

[Update Feb. 28 — As reported by JewishInsider,  at an appearance with Rep. Rashida Tlaib and other “progressives” at Washington’s Busboys and Poets bookstore, Rep. Omar reverted to classic anti-Semitism,  saying “So for me, I want to talk about the political influence in this country that says it is okay to push for allegiance to a foreign country.” Accusing Jewish Americans of dual loyalty, and other anti-Israel and anti-Jewish charges from Reps. Omar and Tlaib, reportedly drew loud cheers from the self-identified progressive audience.]

Despite the earlier partial apology and retreat by Rep. Omar, there is no shortage of people who continue to support what she originally said (for example Peter Feld, Glenn Greenwald, Ashley Feinberg and inevitably, David Duke.)

That’s why it’s extremely important to note that Rep. Omar is factually dead wrong about why the US supports Israel and about AIPAC. Here are the top four reasons why:

PACS (political action committees) give political contributions and engage in other campaign activities, but AIPAC, the American Israel Public Affairs Committee, is a lobby rather than a PAC, and has never given political contributions. It’s quite possible that like many others, Rep. Omar simply assumed that because of its name AIPAC is a PAC, and therefore gives money to politicians.

2. AIPAC is far from all-powerful

AIPAC lobbies for US support of Israel and helps shape the debate in Congress, and indeed in recent decades the US government has often been quite supportive of Israel, but AIPAC has also lost major battles on the most critical issues, such as:

These and similar examples prove that if AIPAC bought the support of Congress it apparently didn’t get its money’s worth.

3. Despite AIPAC’s efforts, US support for Israel was minimal before 1970

Illustrative of this lack of support is that when Israel won the 1967 Six Day War its main weapons were British and French tanks and French fighter jets, not U.S.-supplied equipment, despite the best efforts of AIPAC and Jewish Americans to get the United States to sell arms to Israel.

As Professor A.F.K. Organski  explained in his seminal book The $36 Billion Bargain: Strategy and Politics in U.S. Assistance to Israel, the primary reason for U.S. support of Israel can’t possibly be the Jewish vote, or Jewish political contributions, or the activities of any pro-Israel lobby, for the simple reason that, as polls showed, American Jews were just as pro-Israel before 1970, when U.S. support for Israel was minimal, as they were after 1970, when U.S. support for Israel grew rapidly.

In his preface Organskii stated:

In 1983 I ran across a Congressional Research Service series on assistance to Israel from 1948 to 1983, and I was surprised by what I saw. The numbers told an important story. Assistance to Israel before 1970 had been very low. After 1972 levels shot up. The data fairly screamed that American Jews could not have been responsible for U.S. policy, for it is elementary that one cannot explain a variable with a constant, and American Jews had been in favor of assistance all along…

The US president in 1970 was Richard Nixon, a Republican who knew very well that overwhelmingly Democratic and left-leaning American Jews had already voted against him in large numbers and would do so again in 1972. What happened in 1970 that convinced Nixon, the arch practitioner of realpolitik, to press for increased support for Israel?

Here we can turn to another seminal work on U.S./Israel relations by the late Harvard professor, Nadav Safran: Israel: The Embattled Ally. According to Safran the turning point in U.S./Israel relations was the so-called Black September crisis, in which the Palestine Liberation Organization, assisted by invading Syrian tanks, and in connivance with the Soviet Union, attempted to overthrow and assassinate Jordan’s King Hussein, an ally of the United States (see pages 451-456). Had these two Soviet clients succeeded in taking Jordan, they would have created an arc of radical Soviet client states pointing right at the Persian Gulf, thereby threatening western oil supplies. As Safran put it:

In the White House conception, Jordan under King Hussein … constituted an important buffer separating the pro-Soviet radical regime of Egypt from those of Syria and Iraq, and all three of them from oil-rich, friendly Saudi Arabia and the Persian Gulf principalities. The fall of the Jordanian regime would bring about a solid pro-Soviet bloc from the Euphrates to the Nile …

… [when] the Syrians captured Irbid, an important junction of roads linking Jordan, Syria, Iraq and Israel … King Hussein sent additional urgent appeals for American and British help. Consultations with the British … revealed that they not only refused to intervene militarily … but [also] strongly counseled against American intervention. Similar opposition was expressed by other European allies. The President ordered Kissinger to work out contingency plans for a joint American-Israeli intervention …

Rabin and Kissinger had worked out a two-stage contingency plan for an Israeli air strike and armored assault on the Syrian forces in coordination with an American airborne descent on Amman airport. Israel was to open with a massive air strike against the Syrian armor to help the Jordanian forces. If that did not suffice to turn the tide, Israeli armored columns would advance in a pincer movement from the Golan and the Jordan Valley farther south to cut off and destroy the Syrian intervention forces.

Confident of American and Israeli support, King Hussein was able to commit all his forces to battle; fearful of that support, specifically of a flanking attack by massed Israeli tank columns, the Syrians withdrew, and Jordan was saved. According to Safran this affair had a profound impact on U.S/Israel relations:

The Jordanian episode had a far-reaching effect on the American attitude toward Israel and the Arab-Israeli conflict… [T]he President … was deeply impressed by the determination shown by the Israelis at a time when America’s formal allies had quit on him. He also appreciated the speed, efficiency, discretion and trust with which the Israelis acted through their gifted ambassador, Yitzhak Rabin…

Apart from its effect on Nixon’s personal attitude towards Israel, the Jordanian episode drove home to the President and some of his advisers a crucial point which they previously saw only in the abstract. The crisis and its denouement demonstrated to them in a concrete and dramatic fashion the value for the United States of a strong Israel. At a time when the regional balance among the Arab states, between the United States and the Soviet Union, as well as between Israel and the Arabs states was seen to be imperiled and when the entire American position in the Middle East appeared, as a result, to be jeopardy, the United States was able to retrieve the situation and turn it around only through the effective cooperation of a powerful Israel….

The American action in the Jordanian crisis was therefore seen by Nixon as the first successful attempt to call a halt to the Soviet drive and begin to reverse it by forcing the Soviets to back down in view of their friends, and the key role of Israel in that action was particularly appreciated. (emphasis added)

It was this crisis that led to the United States to greatly increase its support of Israel – not the machinations of AIPAC or political contributions by Jewish Americans.

The American public appreciates the shared values between Israel and the United States, and intuitively understands the strategic value of the alliance based on the stellar battle-field reputation of the IDF. There is no doubt that AIPAC plays a key role in shaping the debate in Congress and in the details of legislation, military aid packages, etc., but none of these details would matter were it not for the strategic realities of the US-Israel alliance.

Rep. Omar has got it exactly backwards. If there have been evil doings against the Palestinians, the perpetrators she should be upset with are the Arab and Palestinian leaders, especially Yasir Arafat and Mahmud Abbas, who did their best to nurture and perpetrate the conflict, rather than ending it on an honorable basis, all at the expense of the ordinary Palestinians Ilhan Omar claims to care about.