When asked – in the context of false or misleading news we expose – whether journalists outright lie, we respond that we don’t believe this is the case in the overwhelming majority of cases.

Rather, the biggest problem we encounter – what we believe to be the single biggest factor driving the media’s institutional bias against Israel – is advocacy journalism.  That is, many of the journalists covering the region see their work as reporters as an extension of their broader political activism, and so their coverage is often coloured by this intrinsic bias.

One recent example is the case of AFP’s Nasser Abu Baker.  Abu Baker, CAMERA research revealed, was a former delegate to the Fatah Congress and, while reporting for the influential French wire service, was chairman of the Palestinian Journalists’ Syndicate, the leading force for the boycott of Israeli journalists and media.

However, even those journalists not affiliated with organisations advocating highly politicised, anti-Israel agendas can engage in activity (often on social media) which undermines any claim to objectivity.  One such case involves British journalist Sarah Helm, who contributes to publications such as the Guardian, The Independent and New Statesman (among other publications) on issues concerning the Israeli-Palestinian conflict. 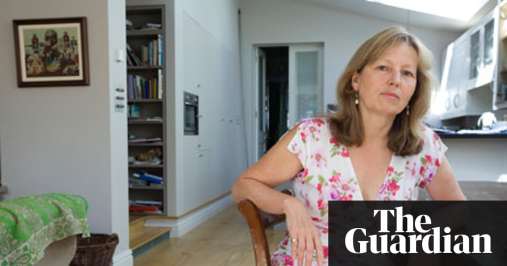 As followers of this blog already no doubt know, Helm has displayed a consistent pattern of pro-Palestinian bias, and a recent Twitter exchange over a highly questionable factual claim she made in a Guardian article – which culminated in CAMERA’s UK Media Watch being blocked by Helm after we politely challenged her – inspired us to take a look at her Twitter timeline.

What we found isn’t at all surprising, but should concern anyone who takes seriously the journalistic principles of fairness and objectivity.

She cites, as news, anti-Israel agitprop from the Hamas affiliated Shehab News Agency.

Here, she appears to be justifying Hamas violence.

Here, she retweets a radical BDS group calling for a cultural boycott of Israel. 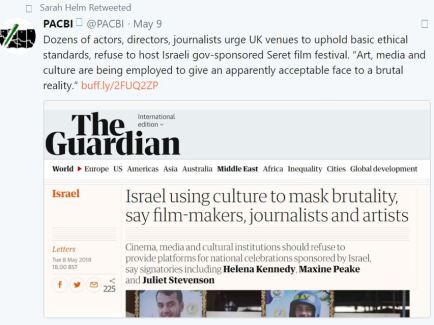 Though several of her tweets express support for Ahed Tamimi, note the words she used when retweeting this: “Please don’t shoot them Israel”. 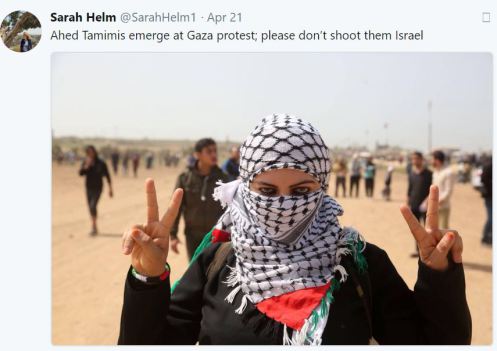 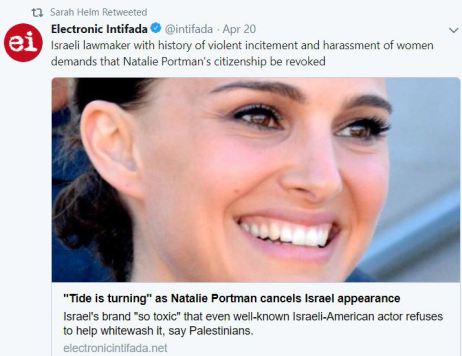 Retweet of tweet suggesting that the IDF targets children.

On the “inhumanity” of Israeli soldier, and the “sickening” siege.

Here she mocks Israeli concerns over the threat posed by Hamas terrorists trying to infiltrate the border. 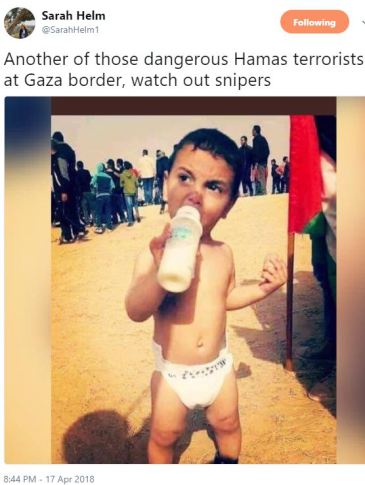 Israel is the biggest cause of antisemitism. (Note: This tweet arguably falls within the parameters of the IHRA Working Definition of Antisemitism.) 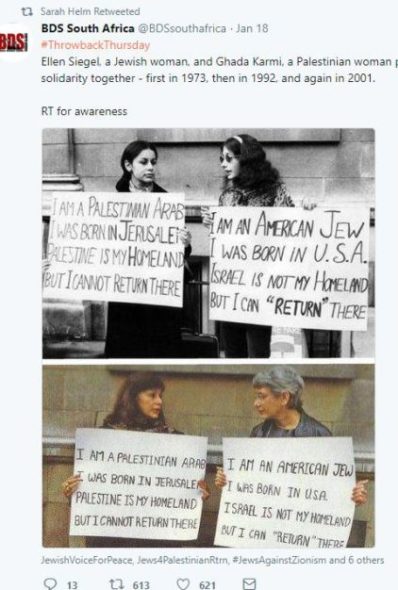 Tweet noting that Holocaust Remembrance Day should remind Jews of the evils of the occupation. 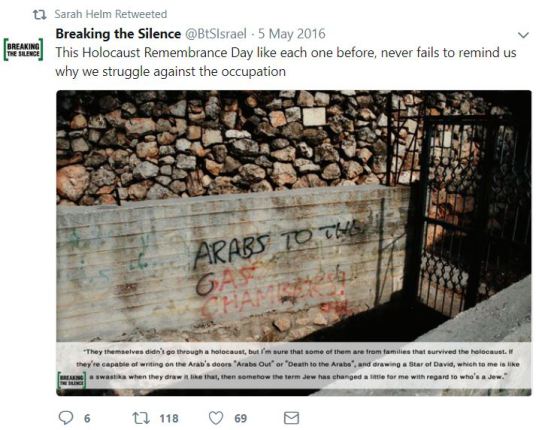 Though we think these tweets (which represent a small sample of her pro-Palestinian tweets during the period covered) largely speak for themselves, and demonstrate Helm’s advocacy journalism, we should note one more thing about our survey of her feed.  We read hundreds of tweets spanning from early 2015 to today, a period which included the surge of terror from 2015 to 2017, and couldn’t find one tweet or retweet even acknowledging (in any context) Palestinian attacks or the suffering of Israeli terror victims and their families.

Whilst newspaper editors are of course free to publish Helm’s op-eds, it seems difficult to defend hiring her as a journalist covering the Israeli-Palestinian conflict – that is, as a professional putatively tasked with reporting objectively on the region.

Sarah Helm is a pro-Palestinian activist. Not a journalist.