At least one of the Arab Israeli attackers is believed to have been motivated by his fear that ‘Al-Aqsa Mosque was in danger’ – a lie cynically used by Palestinian leaders over the past century to incite violence against Jews and Israelis. 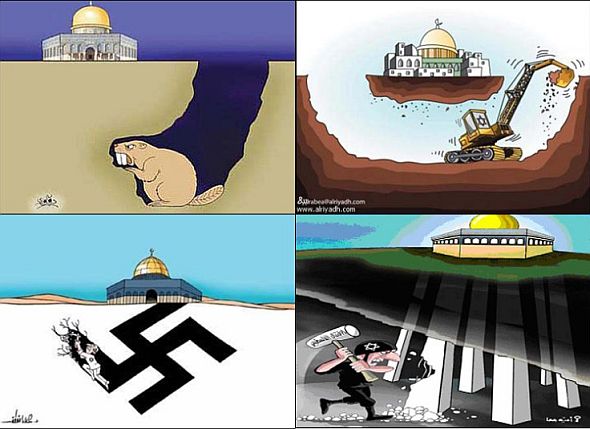 .
A sample of cartoons published in Arab newspapers in recent years warning that Israel was going to destroy Al-Aqsa Mosque

The unprecedented violence on the Mount prompted increased Israeli security measures, icluding the introduction of metal detectors for all Mosque visitors – similar to the detectors Jews must pass through on their way to the Western Wall.

Since then, Arab and Palestinian political and religious leaders began framing the metal detector as an incendiary ct, a violation of the status quo, a threat to the mosque and – most importantly – an excuse for more violence. This incitement led to Palestinian rioting in east Jerusalem throughout the week and culminated in a call byPalestinian religious and political leaders for a “Day of Rage” on Friday to protest the Israeli government’s decision to keep the metal detectors in place.

Such incitement prompted thousands of Palestinians in Jerusalem and the West Bank to take to the streets and attack police with rocks and Molotov cocktails and culminated in a deadly terror attack that evening. In the Israeli town of Halamish, a Palestinian terrorist broke into the home of a family that had just sat down for Shabbat dinner and stabbed Yosef, 70, and two of his children – Elad, 36 and Chaya, 46 – to death.

The terrorist, 20-year-old Omar el-Abed, had posted a message on Facebook before the killing, citing Israeli ‘desecration’ of Al-Aqsa as his motivation, and imploring Palestinians to kill more Israelis to defend the ‘endangered’ mosque – presumably threatened by the installation of metal detectors:

I am writing my will and these are my last words. I am young, I have not yet reached the age of 20, I have many dreams and aspirations.”

“But what life is this, in which they murder our wives and our youth without any justification. They desecrate the Al-Aqsa mosque and we are asleep, it’s a digrace that we sit idly by,” he continued, asking those who have weapons “but only take them out for weddings and celebrations: Are you not ashamed of yourselves? Why won’t you declare war for God? They have closed Al-Aqsa mosque and your weapons are still.”

All I have is a sharpened knife, and it responds to the call of Al-Aqsa. Shame on you, you who preach hate. God will take revenge on you…we are all sons of Palestine and sons of Al-Aqsa. You, the sons of monkeys and pigs, if you do not open the gates of Al-Aqsa, I am sure they will come after you and beat you with an iron first, I warn you.”

However, the UK media largely framed the violence as a reaction to legitimate Palestinian concerns over ‘Israeli restrictions’ to the mosque, ignoring the role of incitement and downplaying the original Temple Mount terror attack which prompted the violence. In stories we reviewed published after the terror attack in Halamish, mostmisleadingly cast the Palestinian killing as a part of a series of ‘clashes’ on Friday over Israel’s installation of metal detectors, equating Palestinians killed by Israeli security forces during violent riots (initiated by Palestinian leaders) with the intentional Palestinian murder of innocent Jewish civilians.

Here are a few examples:

Three Israelis were not killed by “tensions”, nor by Israel’s installation of metal detectors. They were murdered by a particular Palestinian man who bought into the Palestinian narrative erroneously warning that ‘the mosque was in danger’ and that the best way to defend it was by killing “the sons of monkey and pigs”. It’s impossible to properly understand events in Jerusalem over the past week without acknowledging this continuing pattern of Palestinian incitement, antisemitism and violence.