As Israel expands its third COVID booster shot campaign, analysts are pointing to wide disparities between Jews and Arabs when it comes to getting vaccinations. While 80 percent of eligible Jewish Israelis have been vaccinated, about one-third of Arab citizens of Israel have yet to get their shots. As Linda Gradstein reports from Jerusalem, some root causes are poverty and distrust. (Emphasis added.) 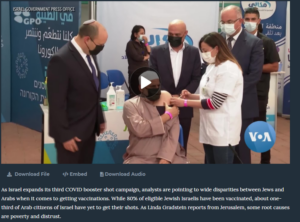 Despite Israel’s success in inoculating over 5.8 million people since the end of 2020, more than 1 million people still remain unvaccinated, many of them young and of low socioeconomic status, the Health Ministry said in a survey released on Monday.
Out of the 1,080,000 people eligible for the vaccine who have not yet received the shot, 16 percent belong to the ultra-Orthodox community and 31 percent are Israeli Arabs, with the rest belonging to the general population.
Ultra-Orthodox Jews and Arabs constitute around 12 and 21 percent of Israel’s population, respectively, and are both disproportionately represented among the unvaccinated.

Besides being less affluent, Israeli Arabs and ultra-Orthodox Jews have a second related factor in common: they have more children, and thus the populations are younger. Thus, even the vaccinated among them live among a proportionately larger population of unvaccinated who are not eligible to be vaccinated. 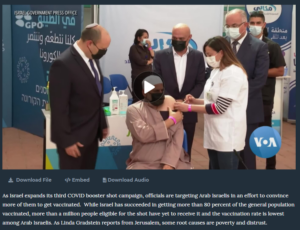 In response to CAMERA’s communication with VOA, editors agreed that “There’s no editorial reason to compare positive vs. negative statistics, as that creates a misimpression of the actual situation.” VOA commendably amended the text, which now accurately states:

As Israel expands its third COVID booster shot campaign, officials are targeting Arab Israelis in an effort to convince more of them to get vaccinated.  While Israel has succeeded in getting more than 80 percent of the general population vaccinated, more than a million people eligible for the shot have yet to receive it and the vaccination rate is lowest among Arab Israelis. As Linda Gradstein reports from Jerusalem, some root causes are poverty and distrust.