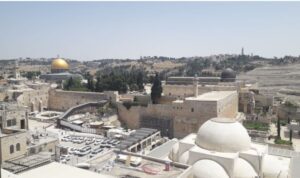 The Wall Street Journal today corrected an assertion published in its November 13 edition that an Israeli Jew had in 1969 attempted to burn down the al-Aqsa mosque in Jerusalem. CAMERA posted a refutation the same day, pointing out that the arson had in fact been committed by an Australian Protestant tourist.

The arsonist who attempted to burn down Jerusalem’s al-Aqsa mosque in 1969 was an Australian who belonged to a Christian fundamentalist sect. An article in Monday’s edition on talks between U.S., Israeli and Palestinian leaders incorrectly stated that an Israeli had made the attempt. (Wall Street Journal, November 15, 2000)

The New York Times today also corrected one of its November 13 articles, which stated that Jordan had controlled all of Jerusalem prior to 1967. CAMERA contacted editors at the paper directly pointing out the error. The full correction reads:

An article on Monday about a meeting of Muslim countries in Qatar at which Israel was denounced misstated the extent of Jordan’s control of Jerusalem before the 1967 Middle East War. Jordan controlled only East Jerusalem and the Old City; Israel controlled the rest of Jerusalem. (New York Times, November 15, 2000)

Media outlets that quickly correct mistakes fortify the ethical standards that are the bedrock of journalism’s role in a free society. In contrast, media outlets like CNN and NPR undermine those standards by frequently broadcasting erroneous information, but rarely issuing corrections.