Earlier this week, a rocket fired from Gaza landed on a home north of Tel Aviv. Although the residents of that home had heeded the siren warning and had run to their bomb shelter, all six, including a baby and two children, were injured. In response, Israel hit Hamas targets in Gaza.

Yet, the Wall Street Journal’s March 26 front page chose to depict these events as follows: “Israel and Hamas Trade Blows as Tensions Escalate.” 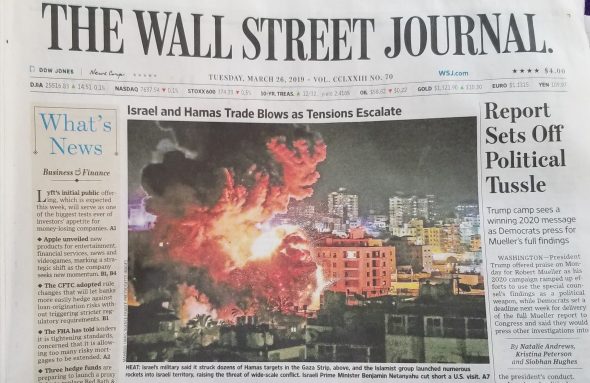 This headline was accompanied by a photo that took up about half of the above-the-fold space on the front page. The photo depicted an explosion in Gaza, with the caption: “HEAT: Israel’s military said it struck dozens of Hamas targets in the Gaza Strip, above, and the Islamist group launched numerous rockets into Israeli territory, raising the threat of wide-scale conflict. Israeli Prime Minister Benjamin Netanyahu cut short a U.S. visit.”

Nowhere on the front page is there any indication of the home that was destroyed or the civilians that were injured. The portrayal is one of two sides that are morally equivalent, each one attacking the other. 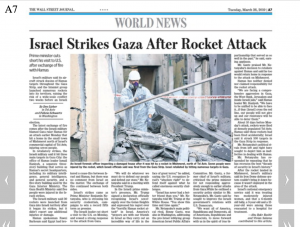 How many readers will take the time to look inside the paper, at the article on page A7? Those who do will learn that, “The latest exchange of fire comes after the Israeli military blamed Gaza-ruler Hamas for an attack earlier Monday that hit a home in the small town of Mishmeret north of Israel’s commercial capital of Tel Aviv, injuring seven people.” And those who read all the way to the end will learn that “ a 6-month old baby, a 3-year-old and a 12-year-old were among those evacuated to a hospital for treatment.”

But many never will. Thus, the Journal helps to promote the false narrative of moral equivalency between Israel, a democratic state whose army defends its citizens, and Hamas, a terror group that attacks Israeli civilians and puts Palestinian civilians in harm’s way.