A story in today’s New York Times refers to Hamas rocket fire into Israel and its imprisonment of two Israelis. But David Halbfinger, the newspaper’s Jerusalem bureau chief and author of today’s article, avoids telling readers that these are both violations of international law.

Writing about a press conference held by the head of Hamas yesterday, Halbfinger notes that the Hamas leader, Ismail Haniyeh, “ignored questions about whether Hamas, in launching rockets at Israel, fires them indiscriminately or intentionally at civilians, and whether it endangers its own civilian population by firing rockets from residential neighborhoods.”

Later, Halbfinger references “Israelis being held by Hamas in hopes of a prisoner swap — two soldiers believed to be dead and two civilians thought to be alive,” and explains that Haniyeh during the press conference “refused to say definitively whether the four are alive, a matter of intense interest in Israel.”

It is disingenuous for the New York Times to treat the question of Hamas’s targeting as if it were unanswered. And it is hypocritical for them to avoid explaining the international law implications of those rocket attacks. Haniyeh is free to “ignored questions” about who is being targeted with his rockets. But Halbfinger is certainly aware that those rockets are both indiscriminate and fired toward civilian centers — and that such rocket fire is a war crime.

A few years ago,  Mathilde de Riedmatten, the  deputy director of the Red Cross in the Gaza Strip at the time, explained that “rocket-fire from the Gaza Strip is against international law because it is directed at civilians.”

Anti-Israel advocacy groups concur. Human Rights Watch reported that “Hamas and other Palestinian armed groups in Gaza have fired thousands of rockets deliberately or indiscriminately at civilian areas in Israel”; that “weapons are inherently indiscriminate when directed towards densely populated areas”; and that those who carry out such attacks are “committing war crimes.” Amnesty International referred to Palestinian armed groups including Hamas that “fired thousands of unguided rockets and mortars towards Israel, in many cases directing them towards Israeli civilians and civilian objects, in violation of international law.” And according to B’tselem, Palestinian rockets are fired “at civilian communities in Israel,” which international humanitarian law defines as “grave breaches that constitute war crimes.”

In Halbfinger’s piece, he also refers to Hamas’s practice of firing rockets from within civilian neighborhoods in Gaza. As with the rockets, he declined to mention that this, too, is a violation of international law. “Hamas and other Palestinian armed groups have frequently violated the laws of war by firing rockets from within populated areas,” a Human Rights Watch report states. 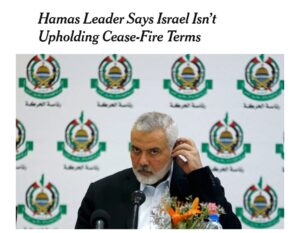 And the same goes for the two Israeli civilians being held incommunicado by Hamas. The civilians, Avraham Mengistu and Hisham al-Sayed, who suffer from serious mental health conditions, are believed to have been seized by Hamas after walking across Israel’s border into Gaza. (Update: A third Israeli civilian, Juma Ibrahim Abu Anima, is also believed to be held captive in Gaza.) Hamas’s enforced disappearance of the civilians and the conditions of their detention are also violations of international law. But Halbfinger says nothing.

The New York Times might defend its omissions as it often does: by insisting that it cannot explain everything in every article. But the paper often makes a point of enlightening readers about international law — at least when it comes to controversial Israeli actions. In 15 articles or more over the past half year, the newspaper charged Israel, or quoted others charging Israel, with violating international law on topics ranging from settlements, to discussions of annexation, to Israel’s handling of Gaza border riots, and even to the country’s capture of an infamous Nazi hiding in Argentina.

But despite the launch of hundreds of rockets from Gaza toward Israeli civilians during that same time period, and dozens of Times articles mentioning those rockets, a Nexis search did not find a single article that contextualized those rockets with a reference to international law, illegality, or war crimes. Halbfinger instead described the rocket attacks as merely the fruit of Hamas “impatience.”

One article about Gaza’s illegal rocket fire did mention international law — to relay Hamas’s accusation that Israel is guilty of war crimes.

This piece was updated on June 24 to make note of a third Israeli civilian believed to be held by Hamas in Gaza.